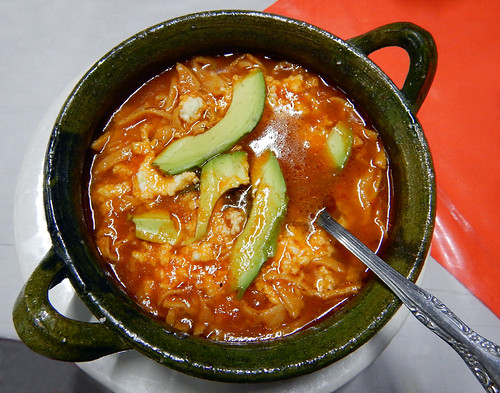 This soup contains many ingredients that were a gift from Mexico to the world: tomatoes, chiles, avocado and corn in the form of tortillas. The recipe comes from a Mexican cookbook that I purchased eons ago.

I. PREP THE TORTILLAS

• 4-8 leftover corn tortillas (NOTE: you can also use the dregs of nacho chips, those broken ones left in the bottom of a package, but add less salt if they are salted.)

The original recipe called for slicing them finely and deep frying until golden in 1/4 cup of oil. This way the strips were really crunchy even after putting them in the soup.

I brushed them lightly with corn oil, sliced them into strips and then toasted them in the oven until crispy. These didn’t maintain their crunchiness nearly as well and went soggy once they were in the soup.

• 1 medium onion, chopped and fried lightly in 1 tbsp. corn oil in a deep pan
• 2 garlic cloves mashed
• 4 or 5 ripe Roma or Plum tomatoes, blanched, skinned and ground (OR a tin of stewed tomatoes)
• 6 cups chicken broth (OR  add 3 tbsp. of Chicken-in-a-Mug to 6 cups water)
• 2 sprigs of epazote (I couldn’t find epazote anywhere so I left it out).
• salt to taste

• toasted tortilla strips from Step I above
• 1-2 avocados, the flesh cut into squares

cut the avocado into squares while still in its skin, then scoop out with a spoon

• 1 or 2 dried pasilla chiles – broken into pieces and soaked

• Queso Fresco, cut into cubes (another option would be Monterey Jack cheese, which is melty and results in a ‘California-style’ tortilla soup)

Tortilla soup with all the extras, as served in Guadalajara.

4 responses to “Eat like an Aztec: Tortilla Soup Recipe”