November is spring in Argentina, and we were there November 2008.

vineyard our first evening in Cafayate

The northwest of Argentina is the most amazing region with this post focusing on Cafayate, one small town in that area with four wineries that offer free tastings.

(from my journal)
Nov 4. Bodega Nanni is a producer of ‘organic’ wines. We did the tour, and afterwards got to taste their wines.

I had to write frantically to keep up with both the wines and the torrent of Spanish – here goes:

As soon as I finished writing this, a woman came up and gave me a printed card with almost everything I’d already written on it. All of Nanni’s wine were fabulous, but unfortunately only available in the US and ‘Holandes‘, at least as of 2008.

The merienda is the traditional late afternoon ‘tea’ of Argentina, something to fill in those long, hungry hours before the evening meal is served at nine or ten. After all that wine-tasting we had a light Argentinean meal for our afternoon merienda: matambre (rolled beef) ensalada mixta (tomatoes and lettuce), chimichurri (parsley, garlic and spices sauce used as both a dip and marinade), bread and cerveza. The word matambre is a combination of two words: ‘mata‘ (kill) + hambre (hunger). Some more typical meriendas. 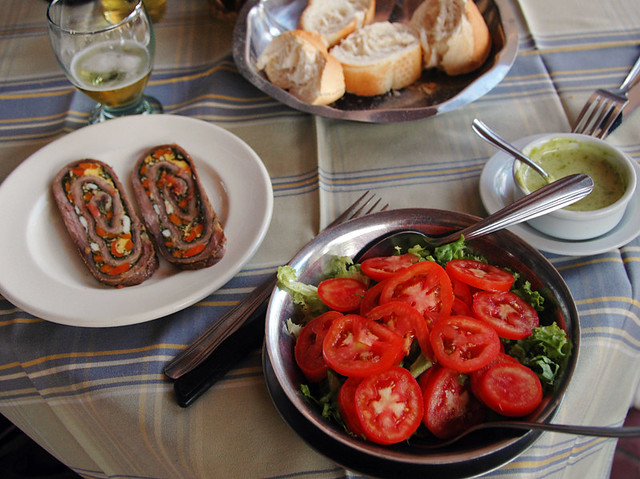 Refreshed, we managed to locate another ‘casa de vino’. This was El Transito, a ‘nuevo’ winery. I didn’t take a single photo of the building as it was modern with none of the atmosphere of the other wineries. BUT I have to say that they certainly made up for it with the quality of their wines! They had an impressive Malbec (2005) and the best Cabernet Sauvignon (2004) we had tasted. The Cab had been aged for 6 months in oak and then for four years in the botella. It seemed a bit odd at first but rapidly grew on me. Al initially thought it too dry but, by the end of our generous tasting glasses, we were both raving about it .

There was another group of people tasting and they had somehow managed to get extra generous glasses, filled to the brim of the truly magnificent El Transito Malbec. We were soooo jealous, “How come you rate such big glasses?” It turned out that they had liked the wine so much they had bought an entire bottle, and then had a connivial gathering at the winery, rather than trying to carry it away on their already overloaded scooters.

Nov 5
Off to Domingo Hermanos. This winery only had two wines on offer, a 2004 Cabernet Sauvignon, very full, soft, and a 2005 Malbec, but both rated 5 mmmmms on our wine scale!

on the bottling line

even the cheap jugs of wine are fantastic, with exquisite dark cherry flavours to die for

Vasija Secreta: this was the oldest winery we toured, but I’m afraid we didn’t find their wine that impressive after the others.

For a tiny town Cafayate has lots to offer. There are tours of Quilmes, nearby ancient pre-Colombian ruins. 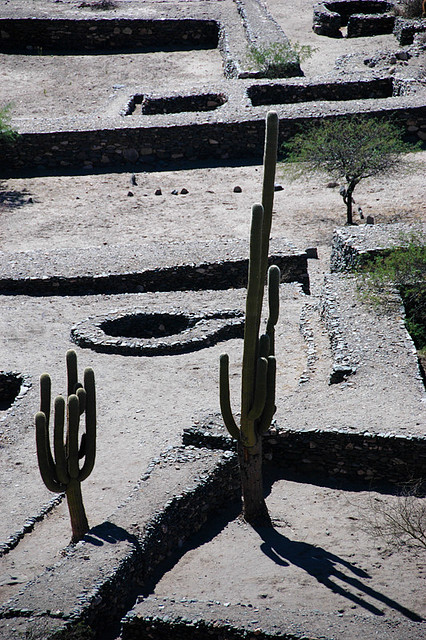 There are also guided hikes through the Quebrada de Cafayate. The Quebrada contains multi-coloured sandstone formations that continue north into Salta and the region of Humahuaca.

For more images of this amazing region, plus a Humahuacan song to drink wine by:

About ‘La Quebrada de Humahuaca‘ to the north of Cafayate.

4 responses to “Exploring the Wineries of Cafayate, in the Northwest of Argentina”