By taking the bus I ended up arriving at the Chinese New Year Parade via the staging area. There were lots of people hanging around, some of them freezing, but everyone eager to have their picture taken.

Here is one of the shivering ones!

This little lotus girl wasn’t shivering at all but her mom said she was quite padded.

Some of the dragon carriers were dancing around trying to keep warm and the next thing you know the dragon was kissing this snake. “Hey, what’s going on here?” a man shouted, “this is supposed to be a family event!”

I’m not sure what these characters on this drum mean, but it was very important to the man standing next to me that I photograph them and then repeat them with the proper Chinese intonation until I got it right!

It’s the Year of the Snake, and there were lots of inventive ‘snake’ costumes. These dancers showing off their snake gloves were one of my favourites.

I was so busy taking photos I didn’t notice that I was on the wrong side of the barrier. Then people started loudly motioning me to get down. I slid down to the curb, leaning up against a lamp pole and took some pictures from there.

But this wasn’t very comfortable so I slunk through the barrier and out the other side. To stretch my legs I wandered down the nearest side street, and found that by this time the parade had wound around to the point that I was back at the beginning of the parade. In previous years there were so many firecrackers going off you could barely see the parade for all the smoke. But this year they only seemed to have ONE very controlled ‘firecrackers on a stick’.

The view wasn’t so good on the right side of the barrier, but just as I was about to leave a bunch of women drummers came running around the corner, anxious to have their photos taken against the Sun Yat Sen Garden wall:
Drummers…

More and more characters appeared at the wall for a photo shoot, dragons…

The previous night I had taken my wallet out of my daypack in order to pay for a pizza. At the time I thought, ‘better remember to put your wallet back or no dumplings for you!’ Alas, I had forgotten to put my wallet back, and even though I rummaged through my pockets and pack I could only scrounge up 36¢. Not even enough for the world’s smallest dumpling :(.

Depressed I headed to the International Village. It was packed with people eating dumplings :(.

There was a stage set up and some guys were demonstrating their karate moves, breaking pieces of plywood with well-placed kicks. 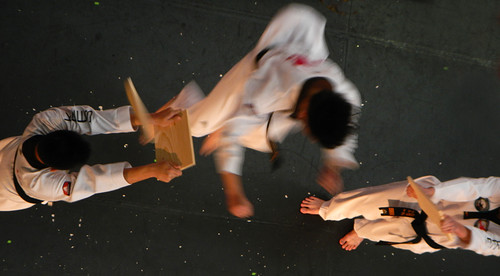 However, when I came out the other side of the mall I found myself in front of the T&T. Hey, they usually have food samples! I went in and had a rather eclectic ‘sample’ lunch consisting of one slice of mushroom cooked in bran oil; 1/2 a dumpling (very good, I would have purchased an entire pack if I happened to have any money on me); one slice of a Bavarian Smokey; and for dessert a gelatinous thing filled with sweet black sesame paste.

I also got a photo of these sea squirts. I have no idea what they taste like but I’ve never met a seafood I didn’t like. Anyone have any recipes?

Half-starved I made my way over to the Art Gallery where the ‘Dumpling Fest’ was taking place. Dumplings from all over Asia, Japanese dumplings, Korean dumplings, Chinese dumplings, Vietnamese dumplings, and more. With no money, all I could do was take photos of other people’s dumplings — the owner of these dumplings said they were delicious…

From there I went into the labyrinth of lanterns. They were handing out free cups of ginger tea – my fave! The lanterns were pretty cool too.

So that was this year’s Chinese New Year, 2013. Last year’s festivities.

2 responses to “Vancouver’s Chinese New Year Celebration 2013, the Year of the Snake”