Our first cooking class featured food (and wine) from the Loire Valley. We started with a very green Frog’s Leg Soup, followed by two excellent appetizers: one of scallops served in the shell and the other of pork belly nibbles with mustard sauce. Being from the Loire Valley, these all had very elegant French names.  The dishes were accompanied by several wines from this region: a Chenin Blanc for the soup and a Muscadet for the appetizers.

First off, kale and broccoli were substituted for the peas and watercress (not yet in season). This was a very green soup.

I don’t think I have ever had frog legs before, or if I did they weren’t that memorable, tasting of course, like that proverbial ‘chicken’, in this case, very small pieces of the brown meat of a chicken. Initially they were soaked in milk to remove the blood and gamey flavour.

Reaction to the soup: Meh.. Probably I would have liked it more if it was pea and watercress?

If I was only so-so about the first dish, this was not true about the second. These were scallops in a wine sauce au gratin, served in scallop shells and super yummy.

two types of scallops: the one with the orangy rim contains the roe. 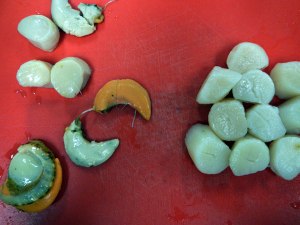 the scallops were arranged in a shell 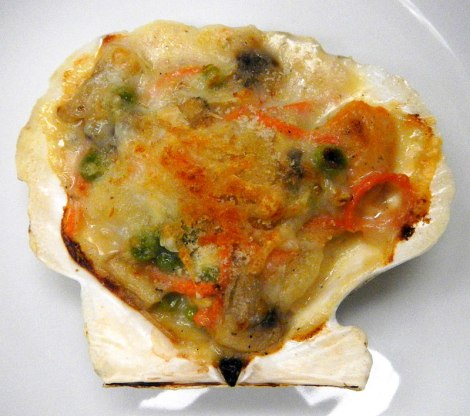 a wine sauce plus breadcrumb/cheese mix were added to the scallops that were then baked. Et voilà!

Not sure how much healthier this pork belly recipe is than the original but it was really good. It reminded me of the ‘crackling‘ on the pork roasts that mom used to make, and I know they stopped sell pork roasts with all that extra fat years ago. Loved it! The mustard sauce was sublime.

Both appetizers were served with the same wine: a Muscadet SO from an area near Nante. It was dry and acidic, fruity and spicy, flavours that should go with things creamy or fatty. I had the first taste just after a bite of creamy scallops and found the wine a bit fishy. However the second slurp wasn’t fishy at all. And with the Pork Rillons it went perfectly!

A drawing of Chateaux Chambord in the Loire Valley. Later I noted that the Loire Valley was all about the quality of light – greys, blacks, whites – different values and value keys. On another page I was wishing I had black and white film in my camera as colour film couldn’t really capture what made the Loire Valley so special.

September, 1978. Chateaux Chambord looked like something a Disney ‘King of Diamonds’ would live in.

The second part of our Loire Valley menu: these items were followed by a main course of light salad with hazelnut-crusted goat cheese plus the dessert of cookies with homemade Cointreau ice cream.

Class 2 of this series moved north and slightly east to the ‘Food & Wine of the Province of Champagne’.

Class 2 Part 1: appetizers of Belgian endives in a Béchamel sauce and savoury eclairs with smoked salmon, with Champagne, the real thing!

8 responses to “Food and Wine from the Loire Valley, Class 1 Part 1”