Trying to use up our three-day museum pass in two days resulted in a couple of heavy, heavy museum days.

This was the first city where we didn’t stay in a B&B, and consequently had to spend time searching for a place to have a petite dejeuner. Everything seemed to be closed, even McDonalds! Eventually we found an open cafe and had a light breakfast of chocolate croissants and coffee. 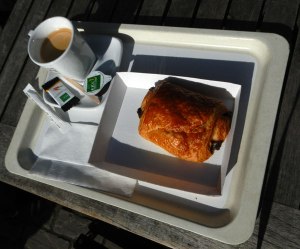 Once we had some food in us we headed to the nearby ‘Kathedraal’. The cathedral was free, our pass was for the chamber containing the painting of the Mystic Lamb where no photos were allowed.

Our explorations of the cathedral was accompanied by exquisite harp music.

Next on the agenda for a sunny day in Ghent was a cruise along the canal, not part of our pass but well worth while.

One of our cruise highlights was the Tollhouse Tavern. Since it was now time for lunch, we headed there but the tavern was tiny, with only three tables inside. On top of that, every seat was taken, both outside and inside. So much for lunch.

Instead we went off to SMAK, the Museum of Contemporary Art, devoted to one artist: Nedko Solakov, a Bulgarian conceptual artist.

This was to be followed by STAM but on the way we passed by the Brasserie Yanko. It looked intriguing, and we were starving by this time, so this is where we stopped for lunch. 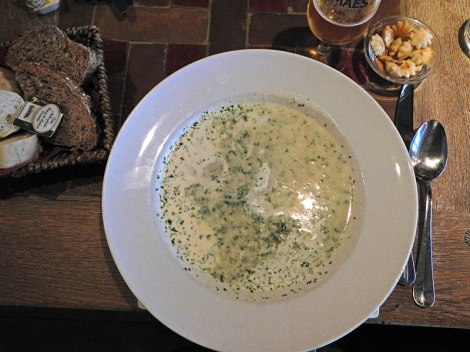 The soupe velouté we ordered had butter, cream, lemon, green and white asparagus and finely minced parsley, and was delicious.

We had ‘Maes Pils’ from Bruges to accompany it, along with a wonderful assortment of breads.

Then on to STAM, the Design Museum, a beer and dinner in Part 2 of our second day in Ghent…

Our trip was roughly based on the Beer Route through Belgium, and here it is so far:

SOME VISITS TO A FEW TRADITIONAL BARS IN BRUSSELS:

TO THE BELGIAN COAST:

10 responses to “Beer, food and museums on our second day in Ghent – Part 1”