My original idea for this painting was to somehow produce a piece of art that took on the characteristics of multiple posters stapled onto a wooden surface. But the image I had wanted to transfer (below) didn’t work, and the image I did transfer went wrong. 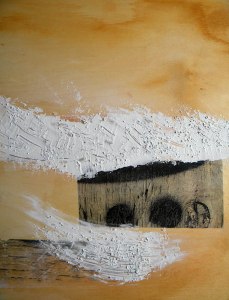 June 9, 2011.  I loved the look of grit in the spackle, and went a bit nuts scraping the mix with a palette knife to form streaky lines. In the process I managed to cover up my worst image transfer as well the bad edges of the other two. But when Jeanne (our instructor) came around to look at the painting she muttered something about the visual elements —the square wood transfers; the wildly organic texture—being potentially difficult to work with…

June 15, 2011. A week later I realized what just Jeanne was saying; my addition of the plaster texture had sent the painting went off in an entirely different direction. My original intention for this piece has been completely lost and no longer works.

June 20, 2011. So now for the cover-up: gesso over the whole damn thing! It’s somewhat ironic that I started this piece by asking, “Where’s the undo button?“ And so have now answered my question. For acrylics, gesso is the undo button.

Now the painting looks much better, and the textures of the pebbles and gouges remind me of grasses with seed heads blowing in the wind. But a piece about grasses is so far off the radar that I have put it aside for now. 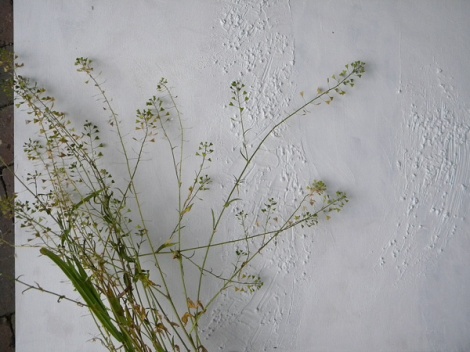 On the other hand, I managed to pick up this enchanting weed on the way home and laid it down on the panel. Maybe…

A few more thoughts on using gesso as a cover up.

Our super instructor’s site: http://jeannekrabbendam.com/ On her site she has her work and offers lots of different workshops and courses.

One response to “Mixed Media Struggle 3: Gesso is my New Undo Button”