Every banana palm puts out two types of flowers: the pendulous flower that slowly opens to reveal a row of small orchid-like flowers that eventually turn into bananas.

These small orchid-like flowers form at the tip of each new banana. (Puerto Vallarta, Mexico) 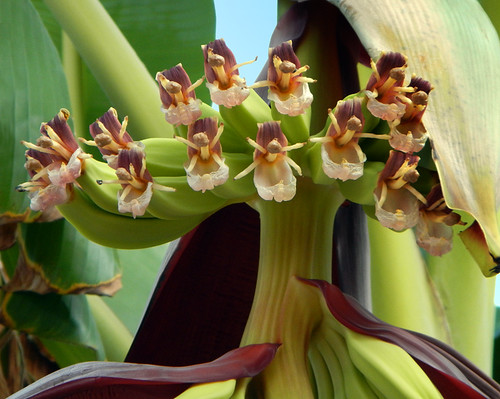 The same banana palm as above, but from further away, showing both types of flowers. The larger plum-coloured flower is called an ‘inflorescence’. 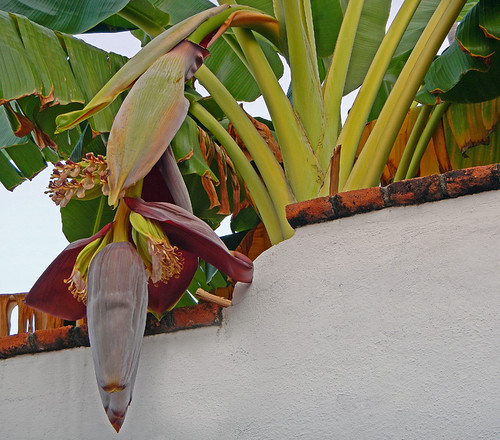 The pendulous plum-coloured flower with a fringe of smaller yellow pre-banana flowers and masses of bananas – I count 26 per row; approximately 50 rows; well over 1000 bananas! Which may account for one of its common names: One Thousand Fingers. Another is Pisang Seribu. (This plant was in the Singapore Botanical Garden) 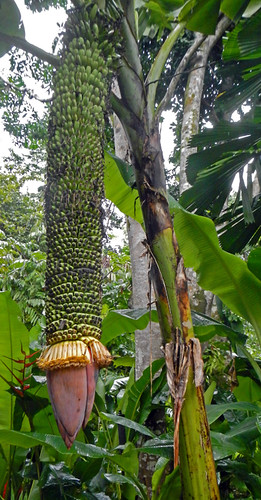 I discovered that the larger flower can also be yellow when a heat dome resulted in crop of bananas in the decidedly non-tropical Vancouver, Canada. 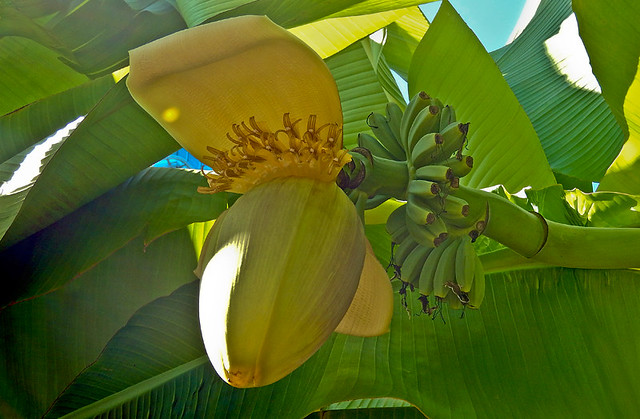 The larger banana flower is often used in cooking where its acrid taste adds a distinctive flavour to some favourite Asian dishes. (Hoi An, Vietnam)

‘Larb‘, transliterated as ‘Laarb’ or ‘Larp’ contains ground meat, chopped banana flower, lime and lots of other flavourings and spices, and is usually served rolled up in a lettuce leaf; for more see my Cooking Class in Laos.

Musa is one of two or three genera in the family Musaceae; it includes bananas and plantains. Around 70 species of Musa are known, with a broad variety of uses. Though they grow as high as trees, banana and plantain plants are not woody and their apparent “stem” is made up of the bases of the huge leaf stalks. Thus, they are technically gigantic herbs.