Last week I went off to the BC Liquor Store, and just so happened upon a cocktail tasting.

A favourite with the crowd, the Rhubarb Fizz was a refreshing mix of rhubarb compote, sherry, vanilla-infused sugar syrup, egg white, Tanqueray No. 10 and club soda, topped with a fresh strawberry.

It was served with Smoked Salmon Tartare, a delicious appetizer of smoked salmon and cucumber garnished with dill, red onion and lemon cream, served in a sesame waffle cup. 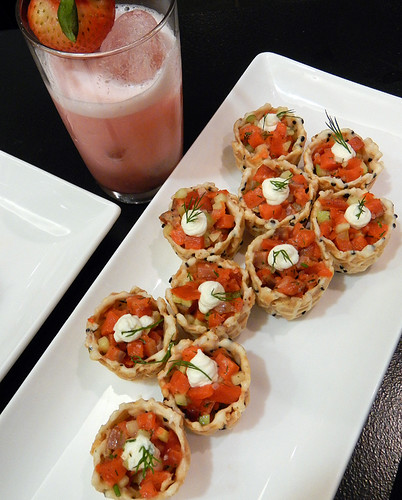 According to the mixologist, Tanqueray created their No. 10 Gin, with 47.3% alcohol, to make  the perfect martini, and it has since become one of the ‘touchstone’ liquors for bartenders everywhere.

You can find the official recipe for the Rhubarb Fizz at http://definitivedrinkingguide.com/post/62066222926/tim-philips-rhubarb-fizz-more-tim-philips.

This definitive drinking guide is based on a TV show that pits 50 bartenders from around the world against each other. As a traveller I found it fun to peruse their web site as the bartenders list some of their favourite places in their hometowns. http://definitivedrinkingguide.com/

There were two more cocktails on offer, with the recipes also on the ‘Definitive Drinking Guide’ site, and each came with a matching appetizer.

The three different liquors being used for these cocktails were Bulleit Bourbon, Tanqueray No Ten, and Ketel One Vodka. 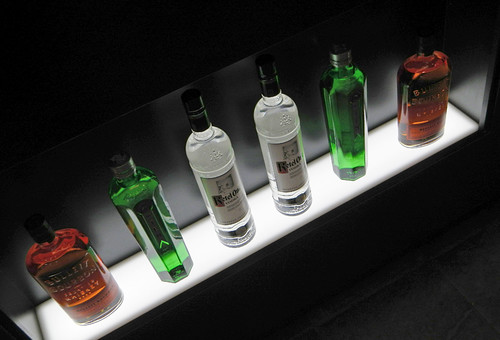 The appetizers, from left to right: Stuffed Peppedews, small red peppers stuffed with whipped feta, caramelized onions and roasted garlic; the Smoked Salmon Tartare described above; and Fig & Goat Cheese Tarts, figs stewed in bourbon with caramelized onions and local goat cheese served on a circle of puff pastry. I tried them all and they were all great!

The fig and cheese appie went with the New Frontiers Cocktail, a vanilla, lime, pineapple, Bulleit Bourbon and almond concoction that was really good, although a bit sweet for me.

The stuffed Peppedews went with the Jan Collins made with Ketel Vodka. The Jan Collins wasn’t getting as many oohs and aaahs from the crowd as the other two, although one woman described it as perfect for sitting by the pool. Since we were in the Liquor Store without a swimming pool in sight, I decided to skip this drink.

Aaah, summer. Now I’m off to use up some of that excess rhubarb in my garden!