Today we travelled from Dinant to Hasselt. It was pouring rain and although we passed by some interesting ruins, neither of us was willing to venture out into the downpour.

It was still pretty damp after we had checked into our hotel so we decided that it would be a museum day. Especially since the first museum we encountered was the Gin (Genever) Museum.
That finished, I noticed a poster advertising the ‘SuperBodies’ Art Exhibition. Six venues around the town had collaborated on a themed exhibit, and I thought this would be another perfect thing to do on a miserable day.

Most of the exhibits were quite bizarre, often verging on pornographic. As we were leaving in a somewhat bemused state, I saw the docent talking to two sweet-faced Muslim girls – I suspect he was advising them not to go in. Here are a couple of the more innocuous exhibits. 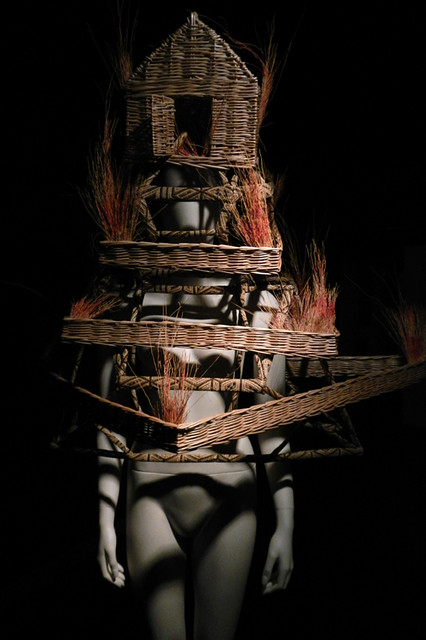 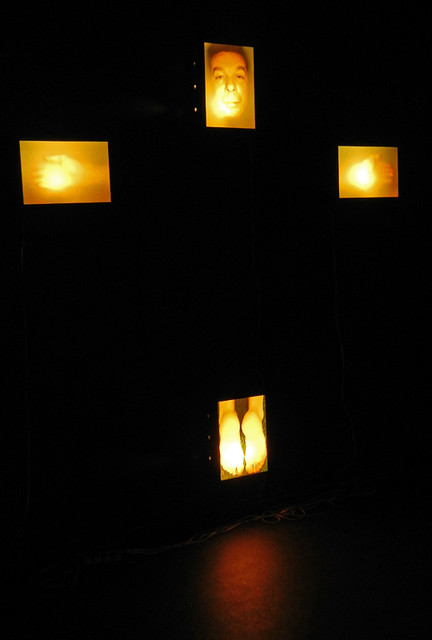 Al wasn’t at all impressed with Superbodies Part I and took off to check the beer list at the Carrillon, while I checked out Part II at the Mode (Fashion) Museum.

But there wasn’t much fashion at the Fashion Museum, just people in weird costumes interacting with rude-looking white ceramic objects, plus kinetic white ceramic sculptures along with broken plates. What this all had to do with the body I’m not entirely sure. Again, some of the more innocuous exhibits. 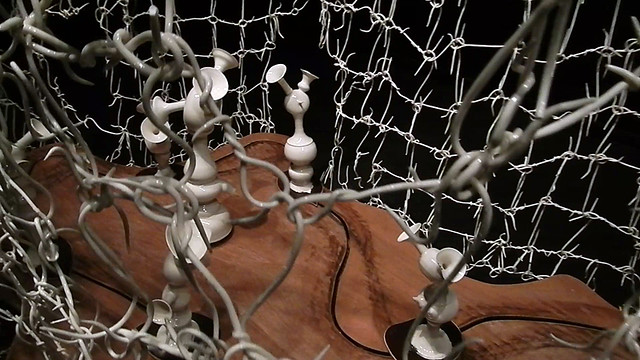 The pub we noticed earlier. It was a bit of relief to hit some normality in the form of food and drink. 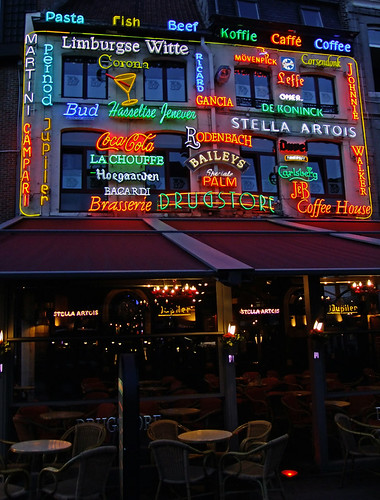 Al had a Magic Chouffe and picked it for one of his beers to take home.

This was followed by a different restaurant for supper, and here we finally had some fun. Especially with the menus all in Flemish. 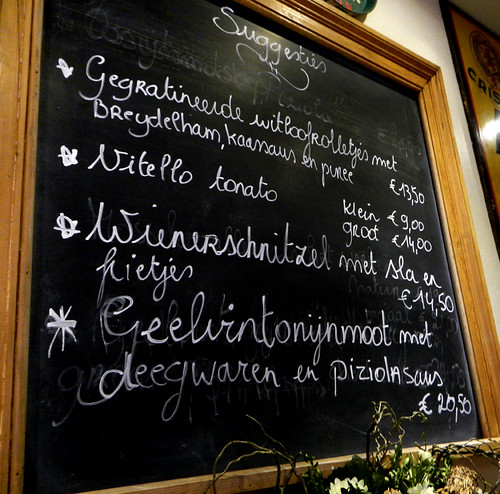 The special that night was called ‘Geelvintonijnmoot met deegwaren en piziolasaus‘ and it was available for €20.

At this point we got a text message from a friend we were meeting up with in Breda. He didn’t say much, so Al responded with ‘Geelvintonijnmoot’ (the name of the special) to which our friend replied,”Bless you!”

We tried to figure out exactly what Geelvintonijnmoot was.

From waitress number one we received the explanation, “It’s like a steak but a fish.”

From waitress number two we got, “It’s a fish but shaped like a steak.”

Other amusements on the menu: brood & boter (bread and butter); salade met grijze garnalen (salad with greasy garnish?). Earlier for lunch we had soup & hoofdgerecht and I hate to think what a hoofdger is!

In the end I had a Salade Niçoise done Belgian style with anchovies, white asparagus, grey North Sea shrimp, grated carrot and Belgian endives in addition to the usual tuna, green beans, olives, arugula and tomatoes..

…while Al knocked down some ribs and salad.

Then there was more beer (of course). This is the Mort Subite Kriek, and I fear I will have to go back to Belgium if I ever want to have it again. Nothing here even comes close!

Al’s choice of beer was a Hoegaarden Grand Cru and this was fabulous. I like it a lot more than regular Hoegaarden. It was rich, cloudy, full-bodied and boozy, and if I hadn’t been so thrilled with my Kriek Al wouldn’t have gotten to drink much of his glass.

Here’s a close-up of the base of the Hoegaarden glass, another collector’s item. 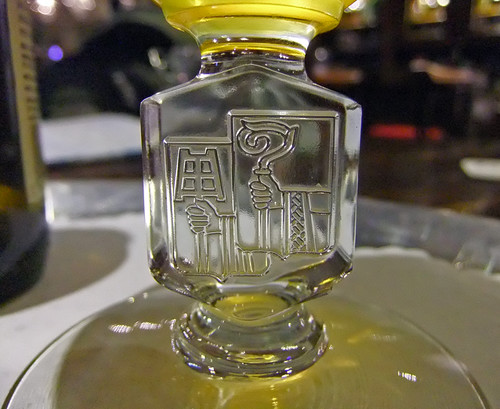 This is part of our three-week trip more or less along the Belgian Beer Route.