We picked our friend Mikey up in the Breda train station where he introduced us to ‘Jane’, his sultry ‘sat nav‘ (GPS).

Jane headed us off to Antwerp, located our hotel without a hitch and once we were settled in, we left her behind as we headed off for our first beers at the K. Zappos Pub!

Here we found great food and very helpful staff, who recommended some other not-to-be-missed drinking establishments in Antwerp!

I had a Belle-Vue Cherry Kreik, the perfect afternoon beer, along with a delicate fennel soup (below).

Al and Mike both went for De Koninck, the local Antwerp brew. The beer features a ‘severed hand’ on its label – something to do with a local legend.

I hate to say it but both Mike and Al pronounced De Koninck beer a bit dull and ordinary, with a bitter back edge.

Al poses as the severed hand of Antwerp

The ‘lads’ both ordered the special: meatloaf á la cerise (cherry sauce) and potato croquettes with mayo. This dish received rave reviews compared to the beer.

Afterwards we wandered around the city taking photos, and found a statue featuring the legend of the severed hand. The guy at the top of the statue is running off with the severed hand (although we’re still not entirely sure what it’s all about)!

Later Al thought perhaps a new symbol should be the severed head!

The rest was a walking tour around the city, an enlightening visit to the FoMu (the Foto Museum where, ironically, photos weren’t allowed), chocolate shopping and then footsore and thirsty we were ready for the highly-recommended Kulminator pub! 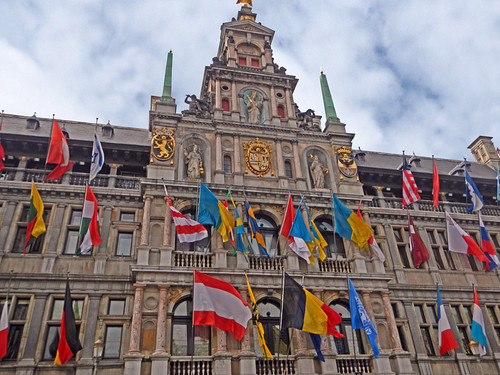 This is part of our trip around Belgium, more or less following the Beer Route.