Camera No. 1: This is a Fuji point and shoot, using its special four-shot light averaging. Not bad for a Point ‘n Shoot at night. 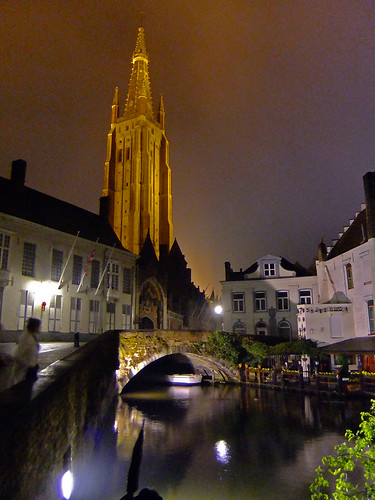 Camera No. 2: The same scene taken with a Nikon DSLR and tripod. Al took both this shot (tripod, DSLR), and the one above (point and shoot), on two different nights. His ‘framing’ is similar for both, and really demonstrates the difference between the two cameras. 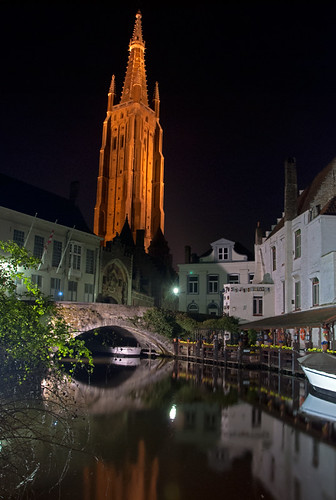 Camera No. 3, the Nikon Coolpix Waterproof: This is my camera, and consequently none of my shots are framed like Al’s. However, this shot probably best shows the problems I have with low light photography using my Nikon Coolpix. It’s not bad but there is a ‘jerk’ blur on all the protruding points and chimneys that is not happening on Al’s night shots. 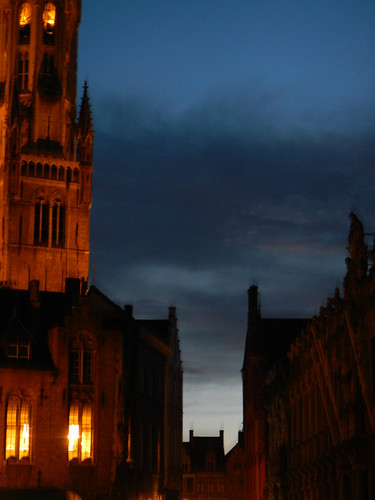 One thing that seems to work well on my little point and shoot is when there is a strong light source like this lamp.

Another thing that works well is if I shoot during the ‘blue’ hour, when the sun has gone down but there is still some light in the sky. In this case it helps to have some interesting silhouettes in the foreground.

This photo of the town fountain combines the ‘blue’ hour with a strong light source.

This image is too dark with a light source that isn’t strong enough resulting in an out-of-focus blurry shot. But I kind of like the eeriness, and the result would have been totally different if taken with a tripod.

One last DSLR shot. None of the point ‘n shoot shots of the canals at night even come close.

For more on this Weekly Photo Challenge : http://dailypost.wordpress.com/dp_photo_challenge/nighttime/