Of Spice and Wifi in Bangkok.

Al was hungry (again) so we went in search of someplace to eat that had BOTH air conditioning and wifi.

The first restaurant we found looked good but it didn’t have wifi so she sent us next door. Which turned out to be McDonalds.

But we wanted food more than we wanted wifi so we carried on until we found an Issan Restaurant featuring the food from Northeast Thailand. They didn’t have any wifi but the menu was interesting.

Good thing too, as I counted no less than seven chiles in my small bowl of soup, basically the extreme limit of my relatively high spice tolerance.

Lesson: Three chiles on a Thai menu in Thailand indicates a lot more chiles than in Canada, where the chile ratings are based on the number of chiles in a dish and never go any higher than five. Which means that this 7-chile dish was way off the Canadian charts!

And if that 3-chile dish isn’t hot enough for you, most of the condiments add variations to the chile theme. The lightest coloured sauce is chiles and carrots in vinegar (hot and sour), the red one in front is mostly chile seeds in oil (blisteringly hot) and the dried chile flakes are just medium hot, for dishes that need a little perk up.

One note about the Thai food accompaniments: if it is white and crystalline then it’s probably not salt but sugar, one way to lower the heat rating in one of those 3-chile dishes.

If you’re craving salt you should go for the murky brown liquid Nam Pla. I love it, but it is ‘fermented’ fish sauce, so not to everyone’s taste. You could ask for salt or soy sauce, one or the other is often available.

Peanuts, chile flakes and lime can give Pad Thai a boost. 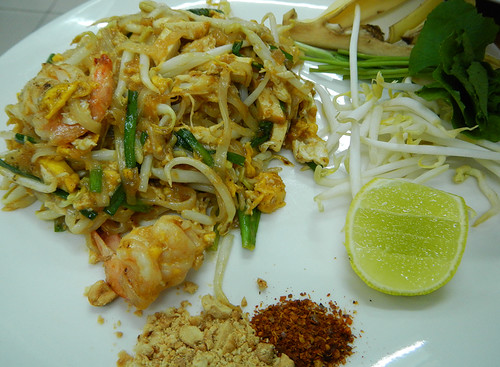 For more on how to order a Thai beer to go with your spicy dish.