After five and a half weeks of travelling through Laos and Cambodia we finally arrived back in Bangkok. The traffic was horrendous. It was so bad that it took our taxi half an hour to go the last few blocks, which then cost us 300 of our precious remaining baht* to pay for it.

Then our pre-paid hotel demanded 1000 baht as a damage deposit, leaving us with about 240 baht ($8) for our night out on the town. In Bangkok, this would usually enough for a fabulous meal.

But as we wandered through Chinatown a seafood restaurant grabbed our attention.

Al was excited. “I think this is the same place we were in when we first arrived.”

The place with the crab! Their crab had been marvellous, and checking out the menu in the window, we saw that they served it up all sorts of ways. We could have crab a different way for each of the last three days of our trip!

Alas, once we were in the restaurant and saw the prices we realized we didn’t have enough baht for the longed-for crab dinner. Did they take US dollars? No.

A customer listening in to this conversation proposed an exchange. She was leaving that night and had way too many baht. How about we give her the hundred dollars US and she would give us 3300 baht.

Instant riches! We immediately ordered Singha beer, crab in yellow curry sauce, mussels in basil and pad Thai, all for about $20.

*We had been carrying US dollars for travelling in Laos and Cambodia, and had been planning to change some into baht in the morning when the banks were open. Plus, in 2007, bank machines weren’t as prevalent as they are now.

Yes, we went back again and this time we had crab in chile and garlic.

One of the first things on our agenda of this trip was to indulge in more of that heavenly crab. Armed with a photo of the restaurant on my tablet, and the address/name New Man Chai 106 Kitchen, we headed off to Chinatown.

We stopped in at the Chinatown Hotel where we had stayed during our previous trip, but nobody there remembered the restaurant, even when we showed them the photo.

Al was certain that it was on the same street as the hotel so we wandered along the street showing the photo to anyone who would look at it.

Finally an older woman, a vendor on the street, remembered it. But she didn’t speak a word of English so her information consisted of clapped hands (closed?); pointing (that way?); four fingers and then two fists (40 blocks?) plus something to do with her foot kicking (kicked out?).

Without a single word of English during this exchange we were left somewhat confused. Later we found someone who spoke a small amount of English and he told us that the restaurant had moved a long ways away – like maybe 40 blocks!!!

Oh dear… We checked out another seafood restaurant but it had mostly BBQ and not the saucy crab we were searching for. 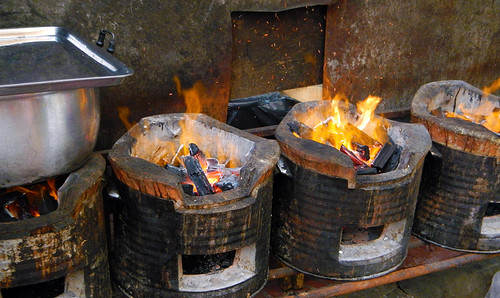 So back we went back to the Pier where earlier I had noticed an interesting cafe, and we had a ‘not’ spicy salad (perfect amount of spice) along with a chicken and cashew dish.  (More about the Thai definition of spicy.)