We left the hotel we had unwisely booked with AGODA and headed into Mandalay to see if we could find a more suitable hotel, along with some much-needed wifi

Located in the town center, the Royal City Hotel had rooms, a comfy lobby and wifi where we attempted to cancel our AGODA booking.

But all we got was an automated no-reply response from AGODA saying that our hotel payment was non-refundable. There was absolutely no way to contact them directly. RRRRR….

So we were stuck out in the middle of nowhere for the next three days, with our only transportation option being a $7 taxi into town and another $7 taxi back to the hotel. We were never booking with AGODA again!

There wasn’t a single restaurant or café anywhere near our AGODA hotel, but near the Royal City Hotel were several options to choose from.

We headed directly across the street to a dark little hole-in-the-wall café that appeared to serve cold beer. And possibly food.

It was filled with locals, all men, drinking beer – some of them pouring what appeared to be hard liquor into their beer (but perhaps it was just a health tonic?). The menu seemed a tad bizarre – fried sparrow, watercress, eel…

But the beers were cold and they came with peanuts, endless bowls of them. I was tempted to just eat peanuts all night.

The waiter came by and whispered about the joys of their BBQ, and showed us a plate of BBQ options. 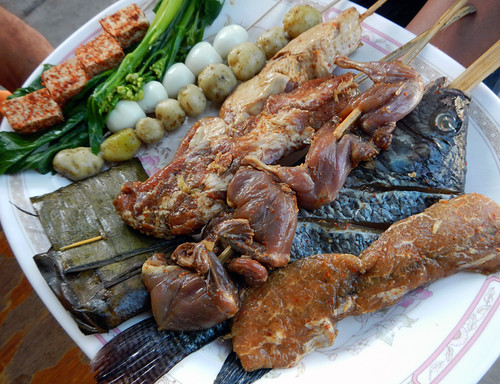 We ordered chicken with noodles (fresh vegetables and delicious sauce), and an order of pork BBQ.

The barbecued pork wasn’t sweet or gooey, just salty (soy?) with a hint of anise (star anise?). It was served with a spicy fruity sauce that was like extra spicy HP sauce. The resemblance to HP was possibly due to fact that the British were here for awhile.

Our one order of bbq pork (30 cents) was so good we end up splurging and getting another. The entire bill for three large beers and dinner came to about $6.

From there we wandered down the street about a half a block and came upon the BBB, a blatantly tourist restaurant that served up western-style food, air conditioning and free wifi. The prices were higher for food but the beer was only $1.50!

We did some of our internet chores and then asked them to call a taxi for us. At some point I had written down the address of our AGODA-booked hotel on a sheet of paper, a damn good thing as the taxi driver had never heard of it! (By the end of our three days in Mandalay that poor sheet was in tatters.)

The ‘café-bar’ was called the Manyadanarbone-2 and the food was so good we ate there a couple of times.

In November of 2013 the only way the Royal City Hotel could be booked was by email but I notice that it is now available on both AGODA and booking.com. It’s not fancy, just comfortable and a good place to meet other travellers. There were five or six restaurants/cafés within that block.

(And personally I would go with booking.com; I was very unhappy with AGODA ).

Mandalay is actually a fairly small town and there are a lot of services, etc. around the centre but once you are a few blocks outside of the centre/palace the only food options are around major tourist sites. There was nothing at all for miles around the hotel we had booked with AGODA, making our arrival in Myanmar a lot less fun than it should have been.

2 responses to “Our First Meal in Myanmar”