The sweltering heat of Mandalay and the kilometre of dusty road ahead of us put a damper on attempting to walk to the next attraction. Then Al suggested we catch a couple of motorcycle taxis who were frantically waving at us.

What a relief! As we cruised breezily past the palace grounds, all my negative thoughts about Myanmar were blown away…

Our motorcycle taxi drivers enthusiastically planned out a tour of a variety of religious sites for us.

The first place they took us to was the Shwenandaw monastery, an original 1800s carved teak wood structure.

Our next stop at the Atumashi Monastery, which, like the Royal Palace, was a reconstruction of a magnificent structure that had burned to ground in 1890. It didn’t have the Royal Palace’s grand rooflines to compensate, and I could probably have skipped this monastery. 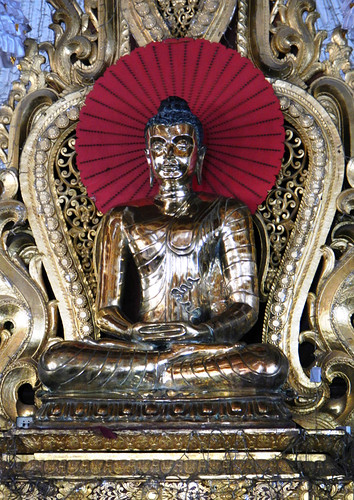 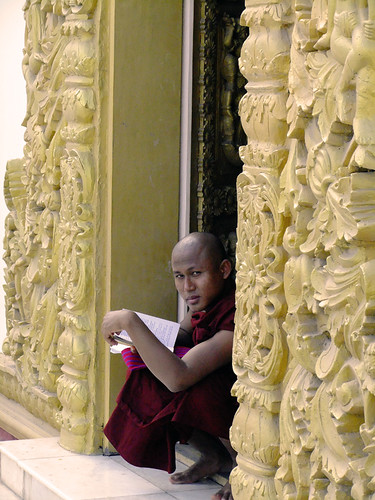 For us the best part of the Atumashi Monastery was these three school girls outside the main structure enjoying their lollipops. 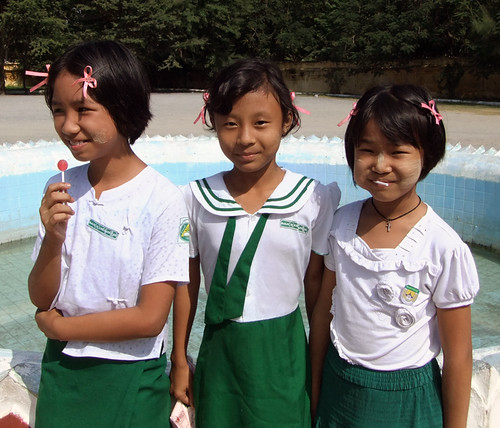 From there we were taken to the Kuthodaw Pagoda. This was not a reconstruction and consequently more interesting. Most of the images on my post Bare Feet and Buddha come from this pagoda and the Mahamuni Pagoda we visited the next day.

Our drivers were still urging us to go to more and more pagodas. At this point all the pagodas were starting to blur together so I have no idea what this next one is called. I’ve tried to figure out its name based on its approximate location on the map, but can’t. I think it might be Kyauktawgyi. This is based on a Google Images ‘match’ of the Buddha. But there are lots of images on there that are definitely not Kyauktawgyi but are labelled as such making me think that I wasn’t the only one who lost track of where they were.

At any rate, Kyauktawgyi or not, there is a little store with folded paper decorations, a long mirrored hallway and a great marble Buddha.

“No more Buddhas!” we pleaded with our drivers and they asked, “How about going to the Gold Pounders’ District?”