Our first day in Mandalay was a swirl through the major sights near the town centre, after which we were abandoned in the middle of a busy intersection.

Somewhere in the middle of this confusion a man approached us. He looked familiar and remembered that we were Canadian. Neither of us could remember where we met him but, mindful of our previous failure to book a taxi in a timely manner, we decided to book him to take us to the famous U Bien Bridge for the following day. His price was 15,000 kyat ($15) and his name was Aung Aung.

The next morning Aung Aung picked us up at 8:30. The vehicle he arrived with wasn’t a taxi as we had expected but what they call in Thailand a ‘songthau’, a type of open-air truck with skinny benches in the back. Hooo boy.

“Recalculating…” (a phrase I repeated an awful lot those first few days in Myanmar).

We had no other choice really, so we decided to go for it. It wasn’t particularly comfortable as we tried to fit our large western butts on benches made for much smaller Burmese bottoms. Al hit his head on the metal roof every time we went over a bump.

But apart from these small things, there was a nice breeze and overall the experience was better than expected – maybe even better than a stifling taxi.

The bridge was a kilometer long and made of wood with shady resting points along the way. Many of the rest areas had food and drinks for sale, and at one of them a fortune teller offered to tell us of our future. 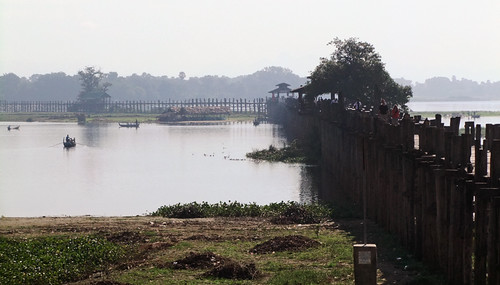 There was a woman selling sparrows in a cage. The little birds were frantic but you could pay to release one of the poor things and get good karma by doing so. But I had to ask myself, how much bad karma do the sparrow vendors get by caging them in the first place?

What with the bridge being a kilometre long, and us stopping all the way along to take photos, we had barely made it to the far end of the bridge by ten o’clock, and weren’t about to race back in order to see ‘monks eating’.

So we continued meandering along, taking dozens more photos of the unusual food for sale, the life on the water and the farmers at work off in the distance. ( I will post them later – there are just too many for one post!)

On the way back we met a Dutch couple that we had shared a taxi with the night before. They had just come back from seeing the monks eating and hadn’t been that impressed, describing it as a very efficient process, “all 1600 monks bolt down their food in 15 minutes and then it’s over, except for watching two hours of clean up.” 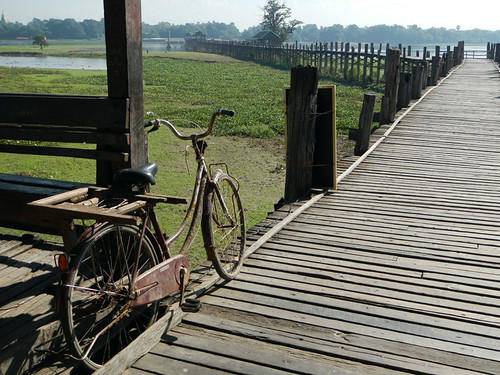 The bridge itself is very photogenic. Here are a few images of the bridge that I fussed over for Daily Post’s Weekly Photo Challenge: Cover Art. 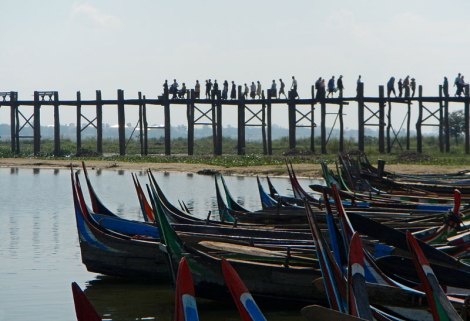