Who wants to go to Thailand, the land of a thousand gem scams, and buy some rubies? I do, I do!

First off, I am not talking about buying high end rubies worth thousands of dollars. Those are really amazing, and you would have to be pretty amazing yourself to be able to tell the fake rubies from the real ones.

Still, it was kind of fun to go to Chanthaburi, a small city to the east of Bangkok, and scope out the gem shops.

Rubies and star rubies for sale. On the shelf beneath them are more gemstones, mostly more rubies as well as greyish sapphires and other stones. 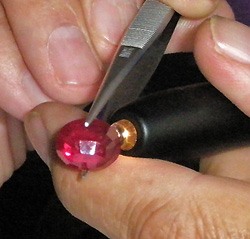 Examining a ruby under the light.

There were a lot of shops selling gemstones, and then there were the people outside the stores, sitting on the sidewalk, offering little bags of rubies for sale. One of the street vendors presented me with a ruby the size of a gooseberry, only $200.

It was a real ruby but of low quality, and I eventually found one just like it for $6. I was a bit giddy when I bought it and only checked the hardness afterwards. Ruby scratches glass*, and this one did, in this case the beer bottle of my celebratory drink. Yay!

Of course it still could be fake but since I only spent $6 I’m not out that much.

Now to take on the heavies in Bangkok, where there were entire malls full of gem sellers. I wandered through them but was totally overwhelmed so I didn’t linger.

Instead I headed to the Jewelry District near the intersection of Bang Rak and Charoen Krung Road in search of a small store that had rubies and an honest shopkeeper.

And this is what I found: four strands of low quality rubies for $90. Now I just have to decide what to make with them!

Thanks to Ailsa for inspiring me with her decision to brighten up January by choosing a Travel Theme of Sparkle! (And yes, I added a bit more sparkle to these little gems!)

*There’s this guy named Mohs who came up with one of the more practical ways to test gemstones: Mohs Hardness Scale. This basically assigns a hardness to different gemstones based on their ability to scratch the stone on the next lower level of hardness. At 10, diamonds are the hardest gems and will scratch all others below them. Ruby is second hardest, at 9 on the scale, and will scratch anything below it. Glass is only rated at 5.5 so the ability of my ruby to scratch a beer bottle is not a perfect test – in reality it should be able to scratch a topaz, rated at 8. But I don’t happen to have a topaz hanging around, and if I did I wouldn’t be scratching it. So all my scratch test proved was that the ruby wasn’t a fake made of glass…

Note: I had done a fair amount of research beforehand and so could sort of tell the difference between low quality rubies vs. garnets vs. crystal glass vs. tourmaline.

Some Vancouver bead shops that carried rubies showed me what to look for, and one even told me what they paid wholesale: $90 for one 16 inch strand of lowish quality ruby beads.

The owner of the shop where I bought my rubies!

Finding an honest shopkeeper was a bit trickier. Some of them blatantly lied to me and one put his finger on the scale. This lady was really informative and I ended up buying a lot of beads from her, not just rubies…

One response to “Travel Theme: Buying Sparkling Rubies in Thailand”