Back from our bicycle ride around the lake, we dropped off our bikes at Mr. A. Tun’s and booked a swimming/trekking tour to a cave.

Mr. A. Tun told us the hike was pretty easy, suggesting that we didn’t need to wear runners, and pointing at Al’s flip-flops said, “It is better to wear air-conditioned shoes.”

The next day we met with Laaboh, our guide, very young, only 16, and the driver of the horse cart that would take us out of Nyaung Shwe to the trail. 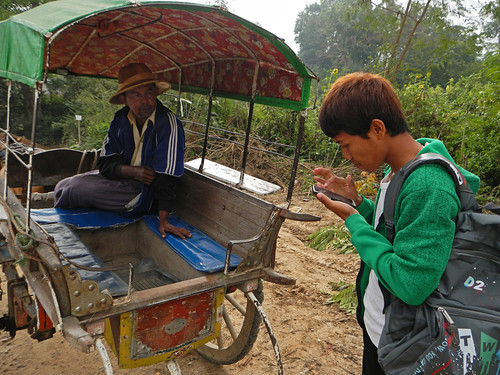 Once we were out in the countryside, our hike started out following a Buddhist monk along a well-travelled dirt road. 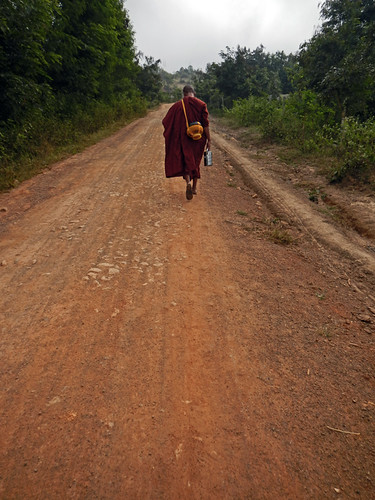 A typical tractor from this area, except this one is missing the typical bouquet of flowers. 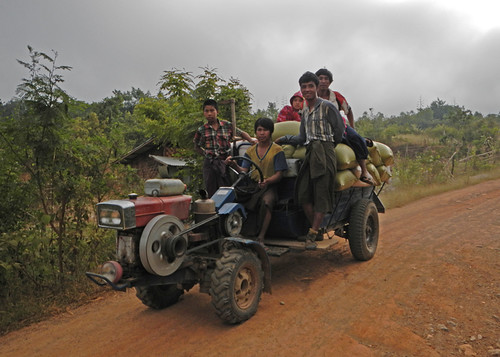 Stands with drinking water were placed all along the trail. 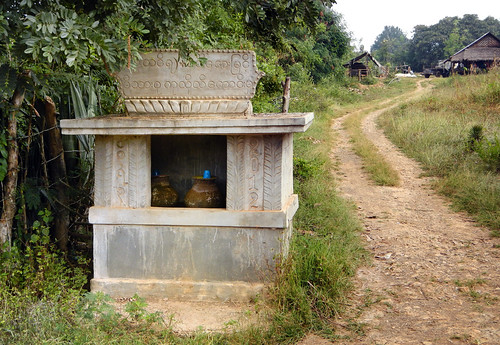 The monk got way ahead of us as we kept stopping to take photos. 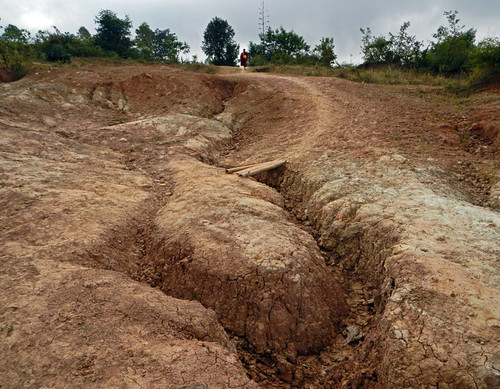 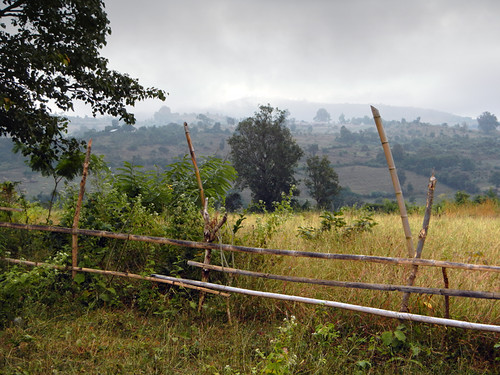 Lots of things were growing in the area including bananas, turmeric, sunflowers, teak and these non-GMO soy beans. (GM Roundup Ready soybeans reached 92% of US soybean acreage in 2008. Source: Non-GMO Report) 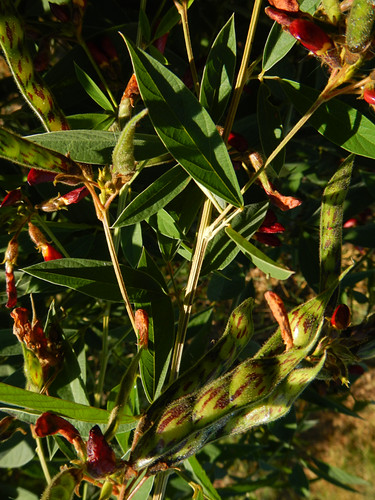 We met many locals along the way. 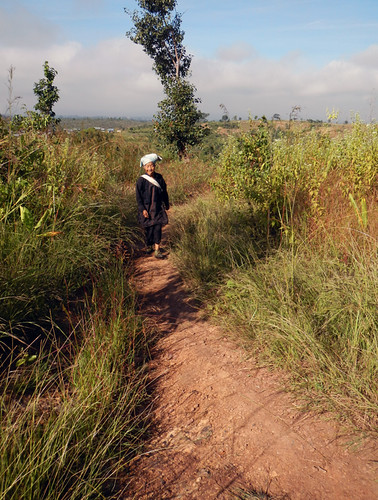 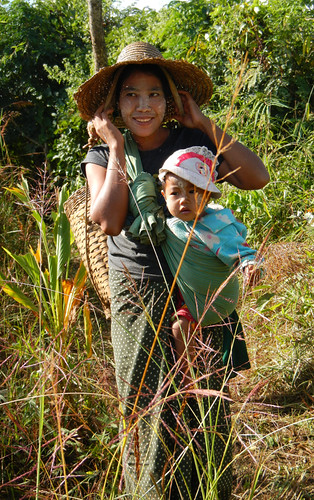 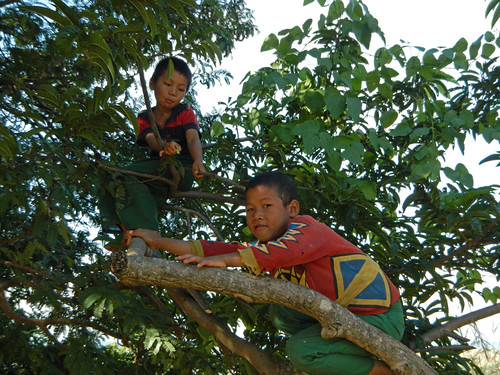 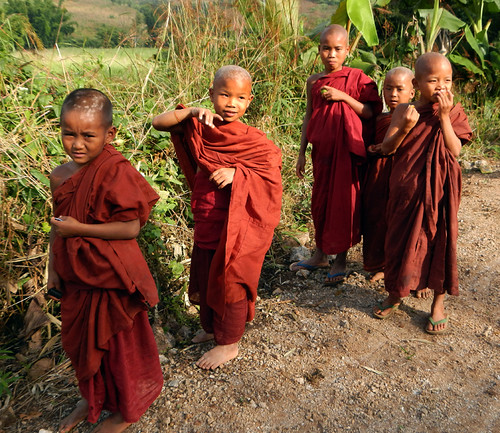 As we neared the cave we passed several Buddhist sites including this white stupa. 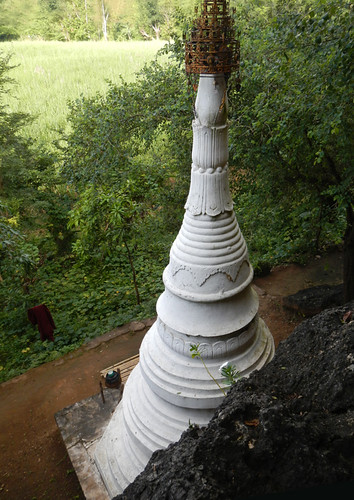 a handwritten note on the cave wall saying ‘no shoe’…

and a small Buddha.

The villages we passed through were fairly primitive but all of them had a snack shop, full of various salty permutations of puffed or otherwise processed beans, potato, rice, corn and tofu. And that’s all they sold; everything else was grown or raised. 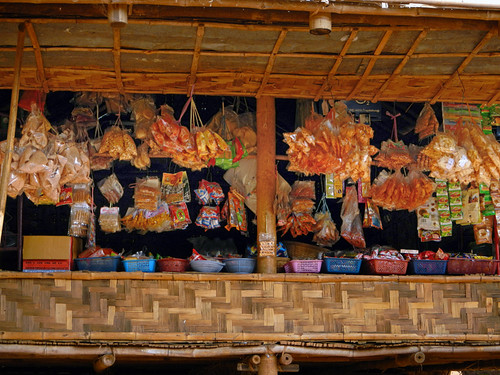 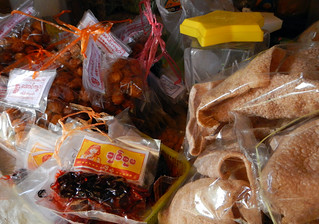 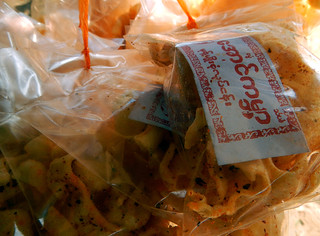 Apparently we walked very fast so the trek was a tad shorter than we had expected. We swam in the reservoir and then made our way to the appointed meeting spot.

While we waited for the horse cart to arrive, Laaboh suggested some music. “Local?” I’m always interested in local music. He started playing his phone – it was some disgusting pop song – Justin Beiber in fact. He could only afford one song for his phone and this was it. He was only 16 after all, but still!

To kill some time he told us the recipe for his favourite breakfast curry. It contained potato, watercress, cabbage, carrot, aubergine, mustard greens, chiles, garlic, cooking wine, salt, jamaica and fresh fish or chicken or beef, and was served with rice.

“No pork?” I asked, as that seemed to be the primary meat we had been eating in Myanmar.

“How old is bamboo?” Laaboh asked, pointing at a thick stand of bamboo with stalks about 10 inches in diameter.

“Only two,” laughed Laaboh, “but sometimes I tell tourists 100 years old and they believe me.”

Our horse cart and driver finally arrived. That is the 100 year old bamboo in the background… 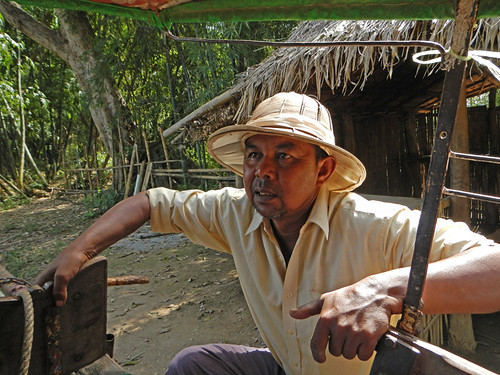