Instead of taking the boat to Bagan we decided to fly to Inle Lake instead. “Cold there,” everyone said. But after the scorching heat of Mandalay, cold sounded fantastic!

About hotels in Inle Lake and Myanmar.

In Mandalay we had been very unhappy with our hotel booked through AGODA, and someone told us the best way to book was to email the hotel of choice.

So we dashed off a couple of emails to two hotels on Inle Lake inquiring about available rooms. Both hotels responded quite quickly, one saying they were full, but the other, the Teakhouse Hotel had a room at $50/night including breakfast, and they could send a taxi to pick us up at the Heho Airport if we sent them our flight details. The Teakhouse was listed in Lonely Planet as $25/night but already we were noticing that Myanmar was more expensive than the other South East Asian countries, particularly when it came to hotels.

We were told by one of our guides that in the previous year (2012) there were so many tourists at Inle Lake that there weren’t enough hotels to put them up in, and many had to bunk down in monasteries. One year later there was a lot of building going on, and the existing hotels had put their rates way up.

We had thought that staying in a monastery might be interesting but a Dutch couple we met disabused us of that notion.

The monks only eat two meals a day, a 7:00 breakfast followed by a 10:30 lunch, and by the time they arrived in the late afternoon there was no food available.

Then it was to bed at eight on a mat on a wooden floor, with blankets pulled out of a cupboard (“and who knows where they’ve been?”). Woken up at 5:30 by an hour and a half of chanting, they were finally ate a plain breakfast along with the monks.

Another young couple that we had met at the winery had landed in mostly new hotels while in the country. They had taken the bus from Bagan into Inle Lake, thinking it was an all-night bus, and that they would arrive around six in the morning. Instead they arrived at three in the morning, with no place to stay.

Somehow they lucked out and found a brand new hotel for $30 a night, large rooms and everything, and being young, got up after only a few hours sleep and then bicycled the same route we had which had killed us (well, Al anyway).

One of the places they stayed at was so new there was no one around to look after the place; they had to remove the plastic from the mattress and lock up the entire hotel when they went out.

Incidentally, the Teakhouse where we stayed was comfortable, but not quite interesting enough to take a photo of…

About the Food at Inle Lake.

The Teakhouse rate included breakfast: watermelon, papaya and small delicious bananas; coffee or tea and a dry sugar cookie; a variety of tid-bits; plus our choice of eggs, pancakes, Mandarin soup or Shan soup.

The breakfast tid-bits prepared by our hotel, in this case all savoury. The dark purply lump is salty sticky rice. Later we bought some buns from a bakery, and they tasted like pan dulce from Mexico, with just a hint of sweetness. 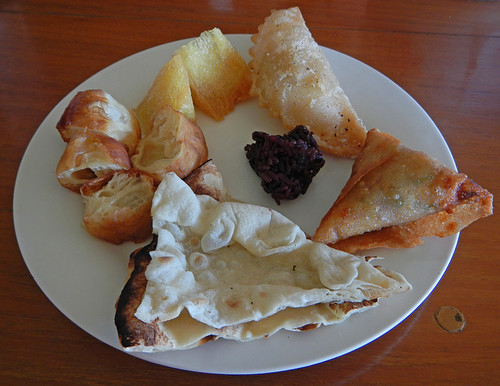 Shan Soup was a specialty of the region. We had it several times, both at our hotel and at the Inle Palace Restaurant. 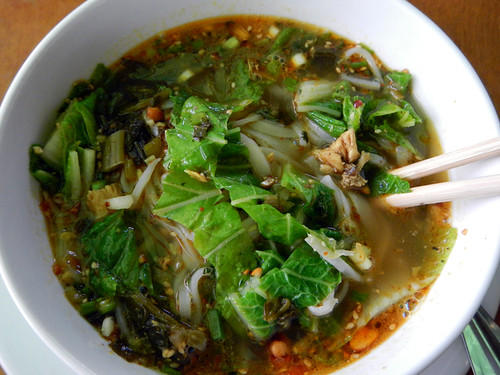 Although we tried other restaurants, the Inle Palace Restaurant quickly became our favourite.

When we first arrived the waitress handed us each 5 different menus – there was a lot on offer at the Palace.

A huge collection of cocktails were on the drink menu, along with ‘Mexican Beer’.

So we settled for a regular beer, a fruit shake and salty roasted soy beans to go with our novel Burmese Days by George Orwell.

As we had noted earlier there was an endless variety of salty snacks so one never went starving in Burma (unless they happened to spend the night in a monastery). 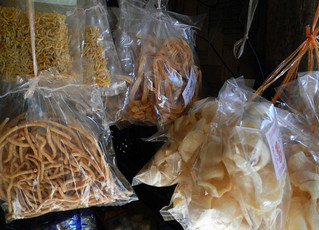 There was a happy hour at the Palace, order two, and get a third drink free. So one day we went early and we ordered two margaritas, which really weren’t at all like margaritas. I thought it might be better to order a Piña Colada as most of the ingredients appeared to be available. But that was a bit odd as well. Later we were talking to some other tourists and they said, “The Burmese love the idea of cocktails but they don’t really get them.” (In George Orwell’s novel they were constantly downing G&Ts so that might have been the best thing to order!)

The soups were very thin-looking but full of flavor. For dinner one night we had ginger soup, bbq pork & vegetables, garlic sauce and rice. 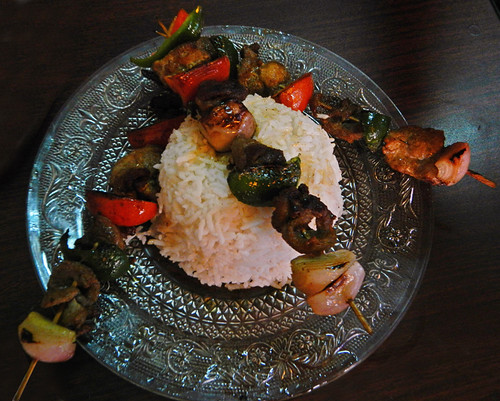 One final look at the Inle Palace Restaurant… 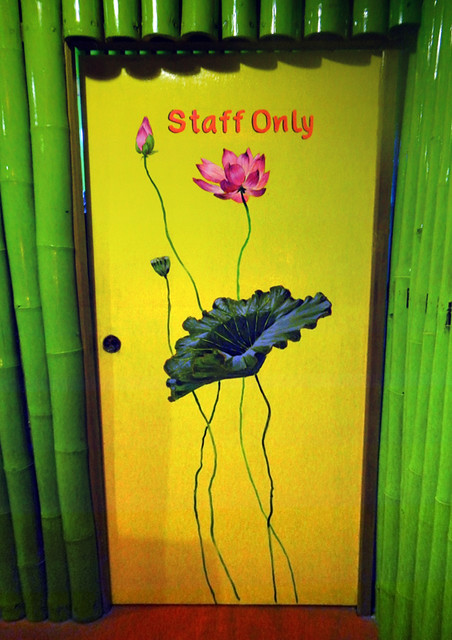