We started our tour of South-East Asia in Bangkok, where I was quickly reminded of just how spicy Thai food can be.

Basically a ‘one chile’ dish in Thailand would be a ‘four chile’ dish in Canada, and a ‘three chile’ Thai dish would be off the charts.  (Navigating a Thai Menu: Chile Ratings & Condiments).

The rest of South-East Asia was, in comparison, relatively mild. We had been in Myanmar for just over a week and hadn’t experienced anything that compared to the incendiary dishes served in Thailand.

In Mandalay, our first stop, we had mostly eaten BBQ which was served with delightfully spicy dipping sauces, one of which was this green chile and garlic sauce.

Our next stop, Inle Lake, was part of the Shan state, and the food could be best compared to really fresh Chinese food. 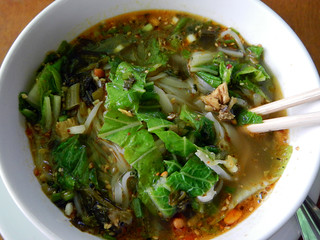 However, in Bagan, I foolishly decided to order Tom Yuang Soup which turned out to be Tom Yam Soup with a slightly different spelling. It had an asterisk next to it, which indicated that it was spicy, but the waitress promised to make it just ‘little spicy’.

When I first tasted it (under the waitress’s watchful eye) there was barely any spice at all. But in the deepest level of the soup, beware, there be monsters! 15 minutes later and I still hadn’t recovered, tears streaming down my face.

In Bagan, the dinner that did me in

A waiter came up concerned, “Are you okay?”

“Chile,” I gasped and the bugger laughed, and brought us some wrapped objects that looked like candies but he told me they were “even more spicy than the soup”.

By this time our original waitress had noticed my distress, and rushed up to apologize. She explained that ‘little spicy’ meant that they only added one chile to the soup, whereas they normally added four!

I actually found a second chile in the soup, and discovered that the green chiles are hotter than the red ones. At any rate, it was 1000 kyat ($1) for the experience (plus about 6000 kyat for the beer to cool me down)!