All the streets in Delft were narrow and often contained metal barriers that only let you through IF you happened to have a special clicker.

Without a clicker to remove barriers it was almost impossible to find a way to get to the hotel we were booked into. Even Jane, our trusty GPS, gave up on finding a clicker-free route.

We eventually found the hotel location the old-fashioned way, by asking around. One passerby even pointed out a 15 minute parking spot right by the hotel.

Along the canals the streets got even narrower, and all the parking spots were permit only.

You had to watch out for bird nests… 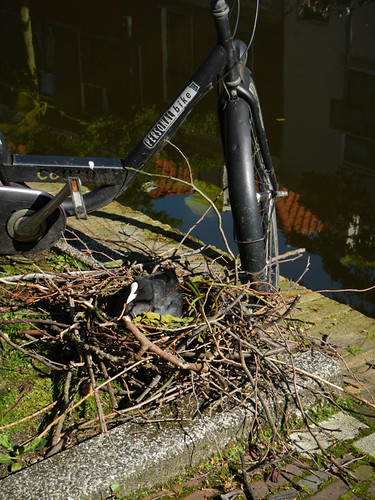 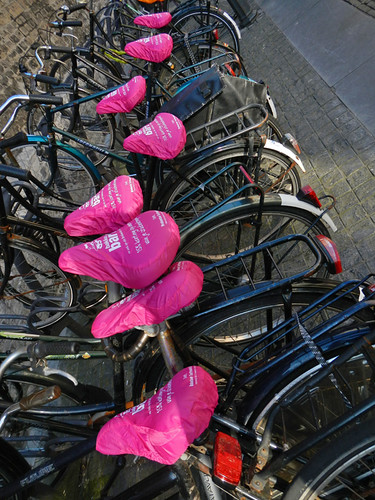 Not to mention that even the ‘permit’ parking was on the very edge of the canal, so that the driver was forced to crawl over to the passengers’s side just so that he didn’t end up in the canal when he opened his door.

Not wanting to end up in the canal, Al blocked the street while I quickly unloaded our luggage. Our room was quite Dutch, with Holland’s famed artist Mondrian working on the side as a bedding/sheet designer. 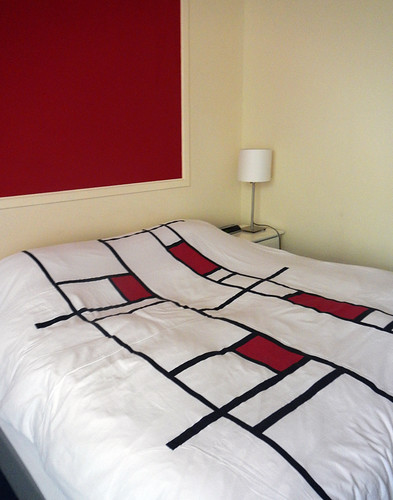 After unloading, we had to make a major tricky U-turn to get to the 24 hour parking lot, another convoluted route, although this time Jane managed to guide us through. Once parked, we took several photos of the lot, really hoping that we would be able to find it again.

We were just about to leave when Al remembered that he had left his pack in the trunk. And then we ran into a little problem: we could not figure out how to get back into the car park!

Nothing we did would let us open the door. There appeared to be a place to insert a card but we didn’t have a card. Unless…

Unless the magic card that opened the door was that parking pass that we had left inside the front windshield of the car, the car that was inside the garage we couldn’t get into…

Some people came by just then and sure enough they pulled out the parking pass and inserted it into the slot. Al gallantly opened the door for them and we ducked in just behind them, and this time we made sure we came out with both the backpack and the parking pass.

___________
And of course, when we left on a Sunday we had to go through the whole rigamarole again, only this time in reverse.

And then we were off with the knowledge that next time we come to Holland it won’t be with a car!

6 responses to “Arriving in Delft, Holland with a Car”