We’re in Spain. But our suitcases aren’t.

This had to do with the hour delay in taking off in Vancouver. By the time we reached Heathrow we were more than an hour behind, and received an ‘Express Pass’, allowing us make the connection in 20 minutes by skipping everything but security.

Anyway, the upshot is that we made it. But our suitcases didn’t. This is the first time we’ve arrived without suitcases in all these years of travelling, but I suppose it had to happen some time.

At the airport they tracked the suitcases and promised us they’d be delivered to our hotel the next day, giving us a ‘property irregularity’ report with a phone number to call back if they didn’t show up “mañana mañana” (tomorrow morning).

At our hotel we had to go through a long Spanglish pantomime in order to inform the hotel manager about the lost suitcases. He promised to tell the day manager to expect them. (Or at least I think he did, but later it appeared that perhaps I misunderstood.)

After a classic late night evening in Madrid, we slept in until 11:30 in the morning. The first thing we did upon awakening was to check whether or not our suitcases had arrived. They hadn’t.

The day manager hadn’t heard from the night manager, so we had to go through the whole painful process of describing our lost luggage again. He assured us that when our suitcases arrived they would be put in our room.

After breakfast we headed off to the Reina Sofia, the modern art museum that I especially wanted to see, suitcases or no suitcases.

After the art museum we raced back to our room to check for our suitcases. They still hadn’t arrived and there was no one to be found anywhere in our hotel.

And although we had a phone number for the aeropuerto, we couldn’t phone them because we hadn’t yet gotten around to purchasing a sim card. So off we went in search of a sim card.

When, at long last, we got back to our room in the hotel, ¡Ai, ai, ai, no hay! Now we were in a bit of a panic. We were leaving the next morning and couldn’t postpone without a lot of problems.

The only person we could find in the hotel was the cleaning lady and she didn’t understand any English. Consequently we had to go through the process of miming our sad situation with lost luggage again.

Of course by this time I had practiced the speech several times. I got as far as “Nuestras maletas estan perdidas. El aeropuerto nos dijo que llegan esta mañana…” when she started flapping her arms excitedly and babbling on in Spanish.

When she saw I didn’t understand a word she was saying, she dragged me into a little room and there were our long lost suitcases.

They had been delivered when the manager was on a break and she had no idea who they belonged to; no one had left a note for her…

What a relief. The system works! 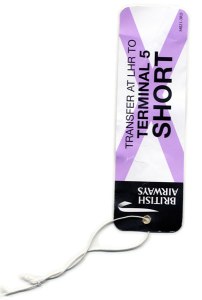 The suitcases had this tag on them, indicating that we had a ‘short’ connection, and that was before we had been delayed by over an hour.

More about our 2014 trip to northern Spain.

6 responses to “We’re in Madrid. But our suitcases aren’t.”