It was a bit of a push to get all the way from Madrid to Santiago de Compostela in one day and I figured we’d be exhausted at the end of it.

But our friend Mikey who lived there had organized an evening out with some other friends he thought we’d be compatible with. And being that this was Spain, the evening was to start at 10:00 at night and carry on from there!

I was somewhat dubious about such a venture, not being much of a late-night person. But surprise – jetlag does it again!

We met them in one foodie establishment which I later found out was La Industrial, and I grabbed a shot of it the next day.

At the time all I managed to get was shot of ‘Sidra‘ (cider) and Leffe Roja taps gleaming in the dark.

The best surprise was the second place, a sort-of deli/bar that carried all kinds of craft beer, much to Al’s delight. Or as Jessica put it, “the place with all the beers was O Bandullo do Lambón, on Calle Raiña. It’s not actually a bar; it’s technically a shop, but you know…anything goes in Spain!

It was quite dark with weird lighting so my photos are not particularly good, except for one of Al and Hector comparing beers. Hector is a fellow ‘Untapped’ fan; ‘Untapped’ being an app that rewards you with badges and next levels for trying out new beers and rating them, absolutely perfect for Al and apparently Hector as well!

Frosty mugs for the beer we were testing. 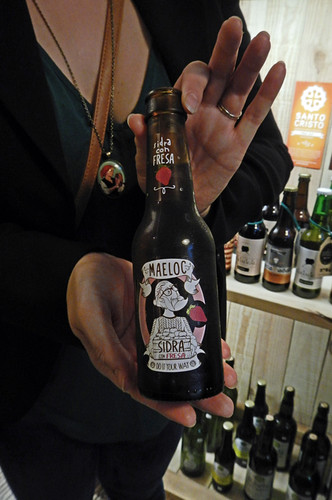 I’m so glad we made it. Our friend’s friends were muchos simpáticos – Hi to Jessica, Isaac and Ester! It looks like we’ll have to go back – Santiago is so much fun and there are such great people living there!

Jessica has since opened a Bakery Café in Santiago de Compostela called Lusco & Fusco, and you can find her on Facebook at Facebook: Lusco Fusco Bakery Café.