“What is this, a one-horse-power car?,” Al asked as our poor little rental chugged its way up a slight incline.

“More like a one-hamster-power car I should think,” I answered, and thus our little rental car was named “The ‘amster”, after Miguel’s pet rat in Faulty Towers.

Our spooky-looking dashboard on the Ruta de Ribeira Sacra in northern Spain; maybe we should have named our car ‘Darth Vader‘! 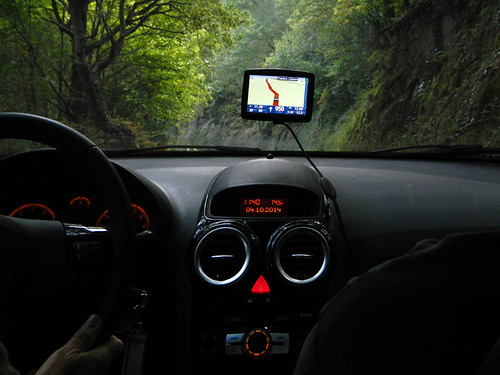 The inspiration for our road trip was this Eyewitness Travel, Back Roads Spain book by DK.

The book is probably more useful if you’re spending a couple of months in Spain with access to a car, as the journeys  frequently take as long, or longer than the stated two to three days. Overall this was a great guide to lesser known destinations, and we enjoyed it so much we ended up buying another book for our next road trip in France.

All the routes contain a number of interesting destinations, including at least one stop with a two or three hour walk. We followed this Ribeira Sacra tour but didn’t get very far after our first experience with the looooong Spanish lunch. Still, I’d love to do this again some time, and this time spend at least three or four days exploring this route.