La Conner is one of the most picturesque towns on the Washington coast, and priced accordingly, but nearby Mount Vernon is much cheaper with some great places to spend the evening.

Here’s an interesting drive with several stops along the way when coming from La Conner to Mount Vernon along the Memorial Highway 536.

For such a small space this garden really covers all the bases. I liked it because I have a small yard, and there were lots of ideas on plantings for small spaces. 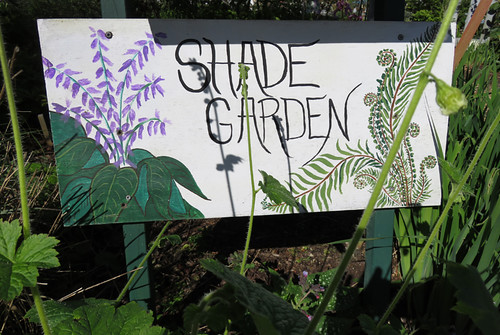 Turns out that Mount Vernon has TWO breweries, and the beer that Al had been dreaming about, described as ‘think massive Ruby Red grapefruit with a long bitter finish‘,  was at North Sound Brewery.

This grapefruity beer, known as Hop Chops, was sadly not available so we got Hop Saw (4.0, clearer, cleaner, with a great finish, but no middle; the best of the two IPAs) and Hopsalute (3.5, cloudier, more flavour in the middle). Al noted that “both these beers have the same flavour start to finish, but I prefer a bit of variation.”

We ordered a chile relleno (Al) and tostados with shrimp ceviche (me), both classic Mexican dishes that have me drooling all over my computer just thinking about them. I had a Negra Modelo, one of my fave Mexican beers.

from Wandering Iris: Next time you’re traveling down I-5 in the US, stop at Skagit River Brewing next to the freeway in downtown Mt Vernon. I think you will like it. (https://irisgreenwald.wordpress.com)

There we tried a flight of their beers and found a very flavourful lager, something that is hard to find. (skagitbrew.com)

This is part of the historic barns map and you can get the complete map at the Do-it-yourself Historic Barn Tour in the Skagit Valley.