Lying down, looking up. What were they doing?

It turned out that they were looking up at one of José Orozco’s masterpieces, the ‘Man of Fire’ that graced the domed ceiling of the Hospicio Cabañas in Guadalajara.

Along with Diego Rivera, Orozco was a leader in the movement known as ‘Mexican Muralism’. The ceilings of the Hospicio Cabañas have a dozen of these fiery, often political paintings, with benches strategically placed below them for viewing.

The walls of the Hospicio also have his many dark murals.

There are more paintings by Orozco in Mexico City at the Palacio of Bellas Artes. 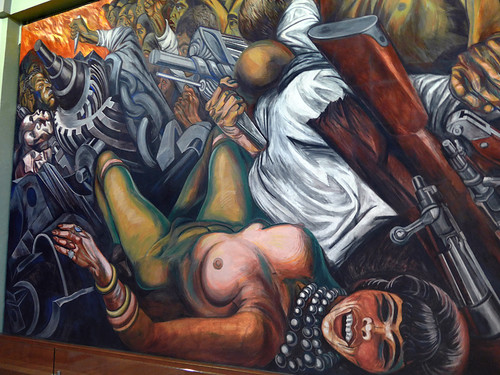 3 responses to “WPC: Looking Up at Orozco’s Painted Ceilings In Guadalajara”