The second part of our day in Arches National Park was ‘Devil’s Garden’ Trailhead, the beginning of a very long, and at times, a very devil of a hike, passing unique and spectacular rock formations.

We started at 11:30 in the morning after a small bite to eat, first passing Tunnel and Pine Tree Arches. This is Tunnel Arch. 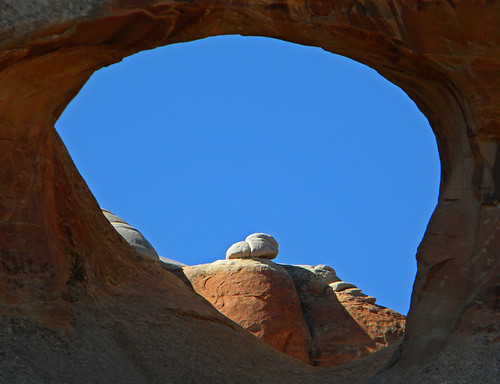 Next up was Landscape Arch, a fragile-looking narrow bridge of rock.

We knew we had entered Devil’s Garden when we saw the vegetation: vicious cacti and dead trees… 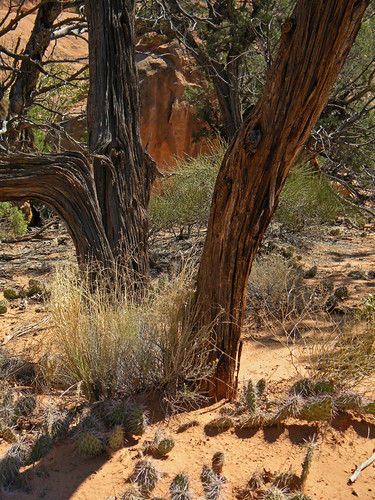 And nasty bushes that stabbed at you when you went by… 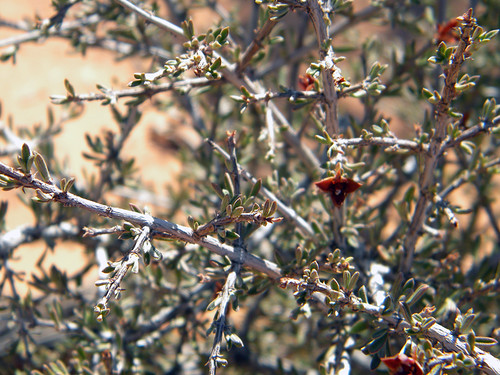 Then it was on past several more arches to the Double O Arch, deep inside Devil’s Garden. 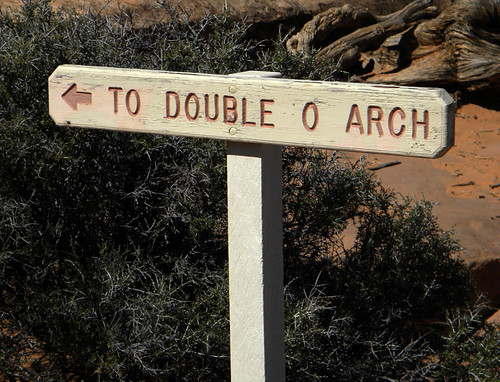 I freaked out when I saw Double O Arch, thinking that I wouldn’t be able to climb up and over into the arch. Al hopped over easily, and I was left standing there. But these two really nice guys gave me a boost over, and then berated Al for abandoning me! The Double O Arch consists of two holes in the rock. We are standing on a ledge looking down. The smaller hole is still double the height of the tiny hiker below. 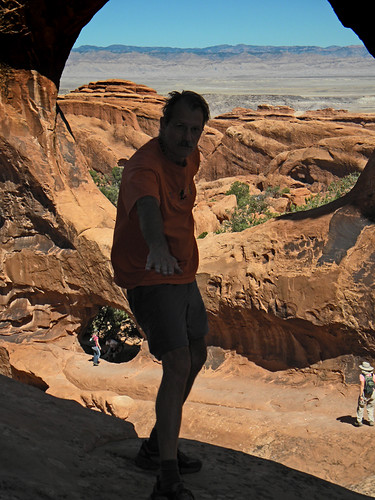 From here on the path was labelled ‘difficult’ (or so they said). Actually it was not bad at all and we saw these amazing rock fins. 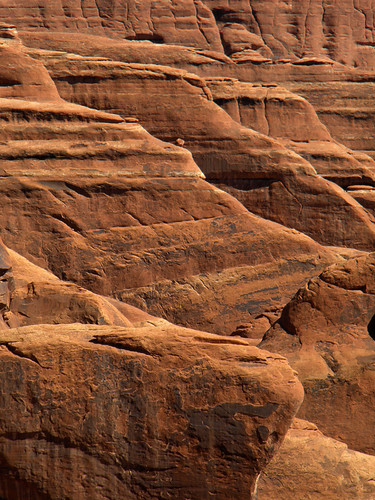 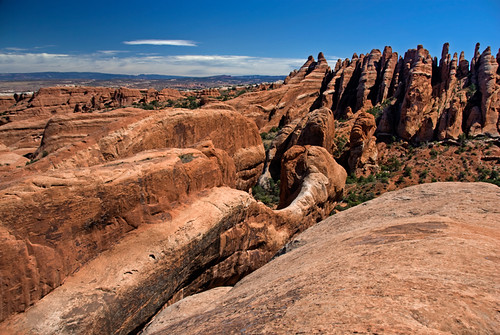 Since that particular trail had been designated as ‘difficult’and hadn’t been, we decided to continue along the ‘Primitive Trail’ rather than backtrack where we had already been. 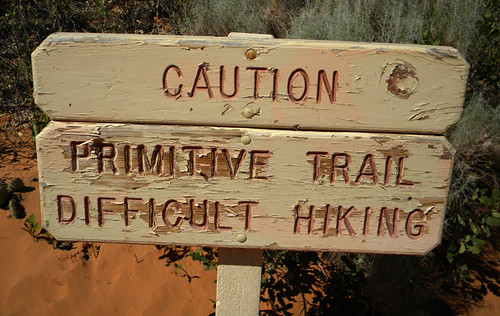 The only arch on the ‘Primitive Trail’ was the ‘Private Arch’, not nearly as interesting as some of the others we had seen. And, unfortunately for us, this time they weren’t kidding when they said it was ‘difficult hiking’.

People coming from the other direction started warning us about what lay ahead. “It’s either sink or swim,” said one. Another informed us of some “vicious rock scrambling”.

When we finally came upon ‘the place’ there seemed no way around it. We either had to go up ten feet of slickrock or through a muddy pool of unknown depth.

“It’s go or no go,” Al stated then suddenly opted for go, making it to the top of the rock quickly, courtesy of his long legs.

He managed to get hold of me by one arm but I couldn’t get my boots to grip onto the tiny ledge, the only one within reach.

After an interminable amount of time I cried  “Just let me go!”; at that point I was ready to slide down and drown in the pool (or at the very least, batter myself and destroy my camera).

“That is not an option,” Al yelled from above, and finally, with a sudden burst of energy (my last), I hung in mid air for a second (almost pulling Al over on his head into the pool) and went for the next possible ledge. I just managed to grip it with my hand, and then my foot found a ledge at my waist level and with that I was up on top of the rock.

We sat there quivering on top of the rock for awhile, both of us totally exhausted. Eventually we gathered enough energy to make our way down into a flat area where we collapsed for a second time. Everything had been taken out of us; we had nothing left inside.

After what seemed like an hour of sitting there comatose, I managed to find some ‘antique’ peppermint candies in my pack which revived us just enough to finish the trail.

At 2:30 we came out the other side, sucked back a quart of water each at the water pump, ate lunch and watched as other tourists started out on their own adventures. 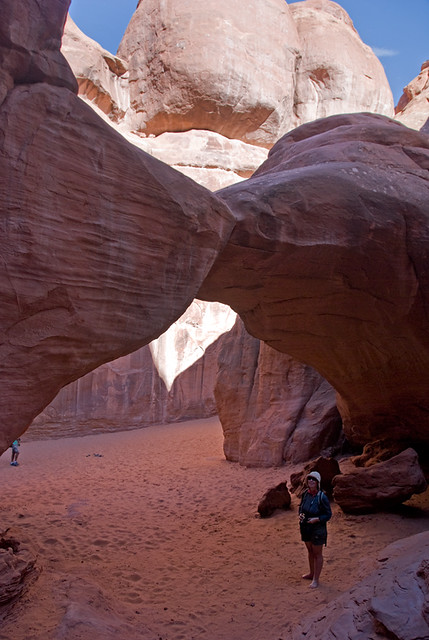 Stops No. 8: Wolf Ranch and the Petrogylphs

Drove past the Firey Furnace. This was the hike that we had really wanted to go on but unfortunately it had been booked for several days in advance. From the outside it looked like just another bunch of red rocks.

From there we took the trail to Wolf Ranch (an abandoned log cabin and corral). 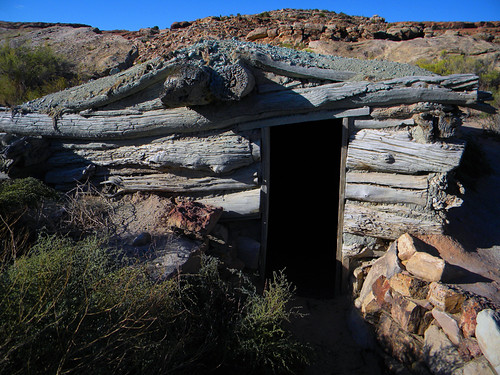 These petroglyphs were a little bit further along the trail. 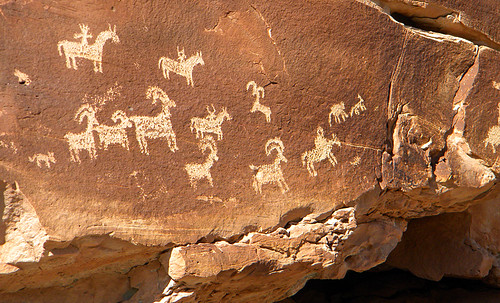 Our next stop of the day would be to watch the sun setting on Delicate Arch.

More about Travelling in the (Wild) West.

6 responses to “Arches National Park 2: A Very Devil of a Hike”