Our day in Arches broke down into three parts, the morning viewing of sights, the afternoon killer hike and finally watching the sun set on Delicate Arch.

Much earlier in the day we had seen Delicate Arch from a distance. 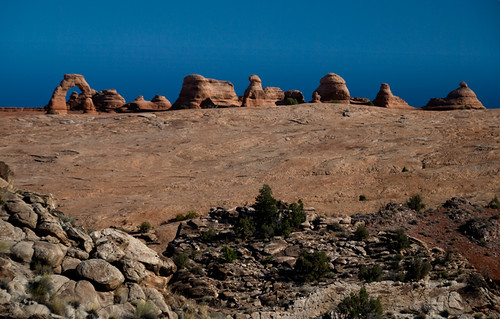 This was to be our last stop of the day, so along with about 50 other photographers we sat around waiting for the sun to set, and the arch to glow red in the twilight. 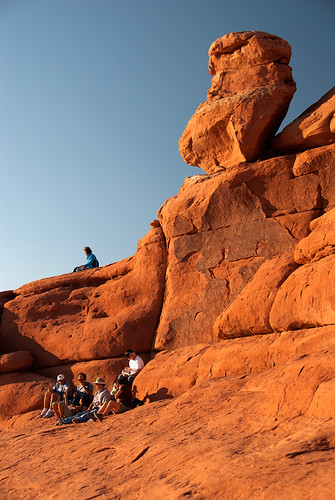 Numerous people, Al among them, made their way down to the arch and posed in the archway. Eventually the rest of the photographers started getting annoyed and called out, “Enough!” Below is a shot of Al annoying the other photographers.

So this is the my photo of Delicate Arch at sunset, probably the same as millions of others. 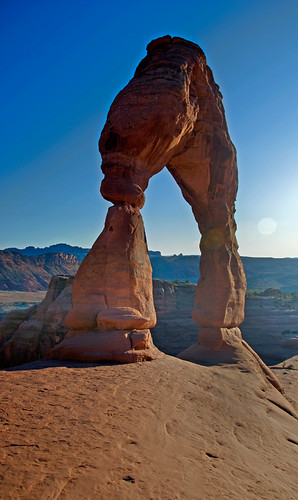 We decided to go back while there was still enough light to see.

On the way back we made our way along a wide ledge. In the evening light it had a distict Indiana Jones feel to it.

“I expect a giant round stone to come rolling down the path any minute,” stated a fellow hiker. That spooked everyone and we all dashed to safety.

Only to pass people who were racing upwards. “Have we missed it?” they asked breathlessly. More and more hikers kept coming up as we were going down. At some point we just yelled, “Run, run!” to anyone who was still on their way up. 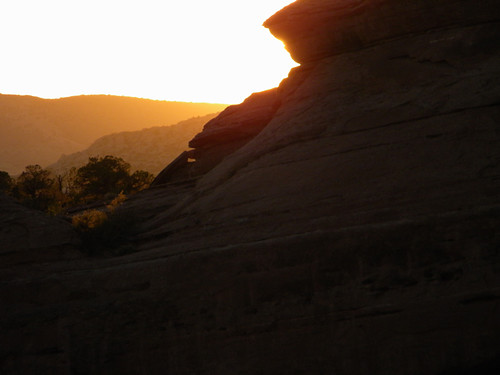 Driving back to Moab the sky was a brilliant ‘Z’ as in “Zorro was here”. And the moon came up but nobody stopped including us, a shame really, it was brilliant. 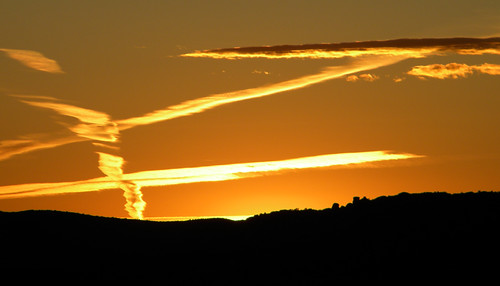 That evening we stopped at the Moab Brewpub for dinner – it wasn’t nearly as impressive (to me at least) as Eddy McSlick’s from the day before. Their pub area only had a license to serve beer (and I had wanted wine); their beer wasn’t all that great. But tons of people on the waiting list must prove me wrong; we were placed in the pub section, and when we finally got in to eat the food was decent.

More about Travelling in the (Wild) West.