Rambling around Holy Island we saw off in the distance some sort of castle, completely overgrown except for one of the towers.

In front of it was an almost impenetrable thicket of brambles, stinging nettles and other unfriendly thorny plants, so nasty I thought that if we ever found a way to get to the castle we would surely find Sleeping Beauty inside!

There wasn’t any obvious trail in that direction, only a faint path of downtrodden grass that led to a gate.

Crossing over a cobblestone beach we eventually located a trail that took us to a dirt road that ran directly in front of the castle.

Up close the rock that formed the castle walls was quite unique and layered. 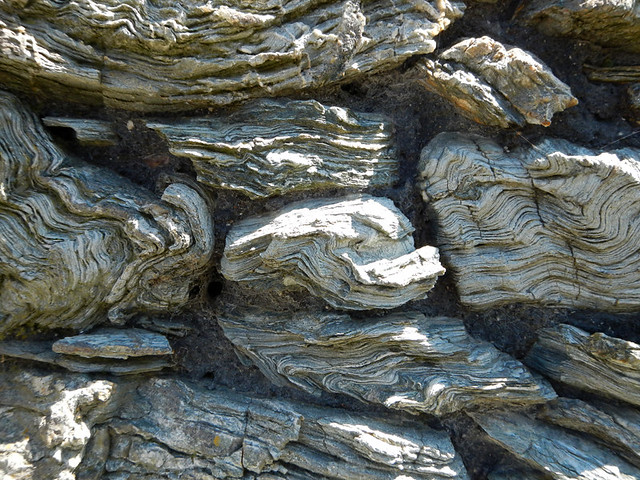 The place was deserted except for an older gentleman who was busy taking a photo of one of the towers.

“Do you know anything about this castle?” I asked him.

“Yes,” he answered and then a small smile played upon his face. “It’s not actually a castle, it’s a house. And I used to live there, until 1946.”

Then he gave us the grand tour and here are the highlights!

At this point one of the dog walkers we had met earlier appeared. We introduced her to the old gentleman and she told us about the time she had met the daughter of the people who had bought the house and converted it into a hotel.

She told us that the daughter had loved the house/hotel but not all the potato peeling, dishwashing and room cleaning.

When her father died they closed the hotel and her mother had lived there by herself.

But people kept breaking in to the point that her mother no longer felt safe and left, and now the place was in rack and ruins.

The old gentleman was writing a memoir about his life but his grandchildren were not as enthusiastic about history as we were. In fact, he described them (with a fond little smile) as rather rude, asking, “so what war are you on now Granddad?”

I asked him if he had an email so I could send him the photos and he replied, “I’m afraid I’m still using pigeon messenger.”

From here it was a short walk back to Breakwater Park where we entered the outdoor gallery and found an old photo of the ‘castle’ back in 1959 when it was a hotel.