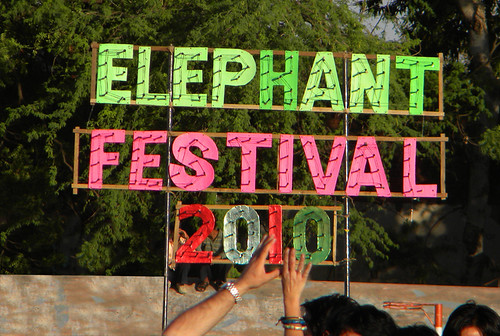 From Dr. Joshie’s we went off to the Elephant Festival which started late, the poor announcer having to keep us all entertained as the VIPs trickled in.

Finally they had all arrived and made their speeches and the Elephant Festival officially began with bands and dancers parading into the field.

At this everyone in the crowd (including Al) rushed out with their cameras into the field to get close-ups of the dancers. (Dancers at the Elephant Festival.)

The announcer kept shouting at everyone to get back, then shouted frantically, “Will everyone get out of the field, the elephants are about to come out.”

Hearing about the elephants meant that even more people rushed into the field. The announcer became more and more desperate, screaming, “Please leave the field, will everyone sit down, it is chaos, well chaos is good but there must also be discipline…”

It was more than chaos, it was total anarchy – I couldn’t see a thing because of all the people in the field and the next thing you know I was in the field as well.

However, when the announcer screamed, “All you tourists get out of there or you are going to be trampled by the elephants!” I got out fast.

But I was only one of a few and the announcer gave up, “Okay, I wouldn’t be too upset if the elephants trampled you tourists.”

Most of these shots were taken by Al, who along with hundreds of other tourists, figured he could stand down a herd of elephants. 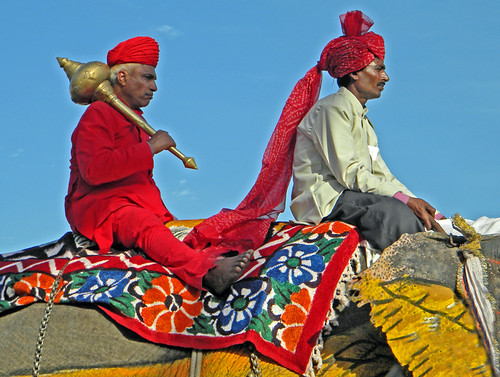 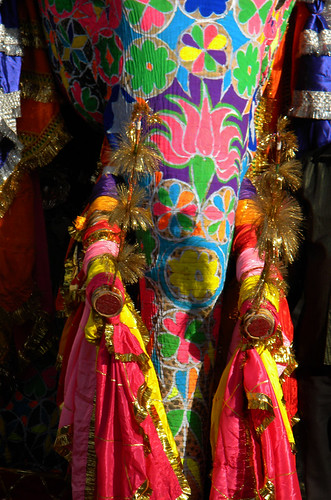 A flurry of rose petals. 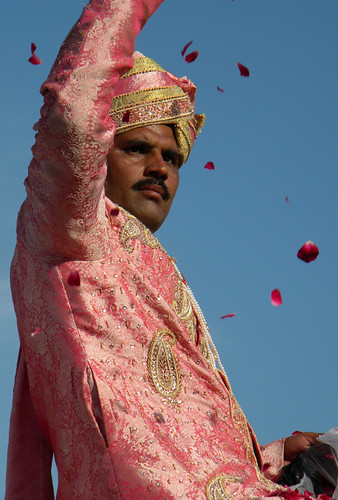 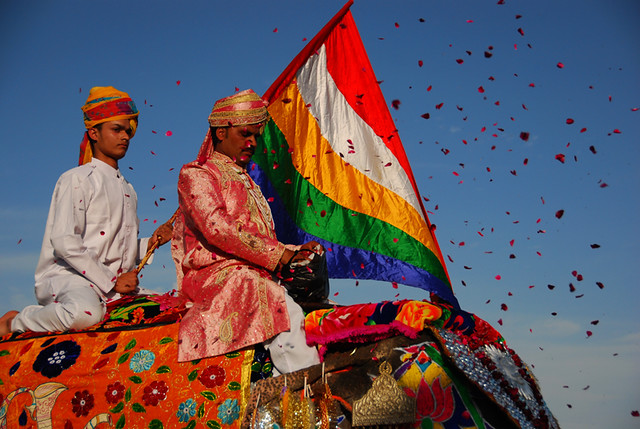 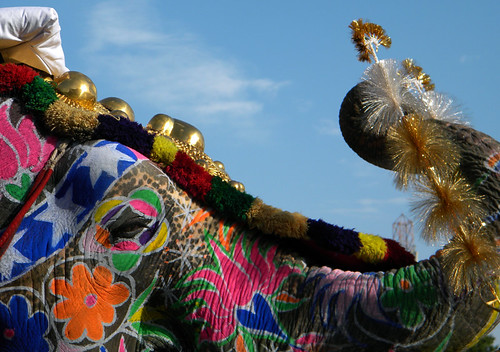 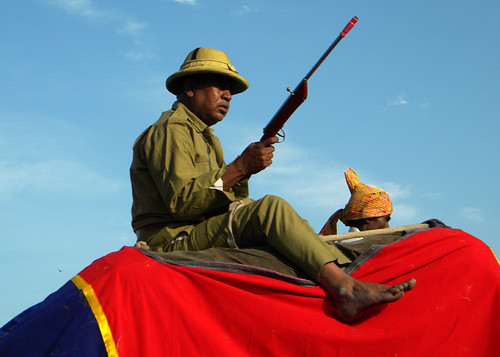 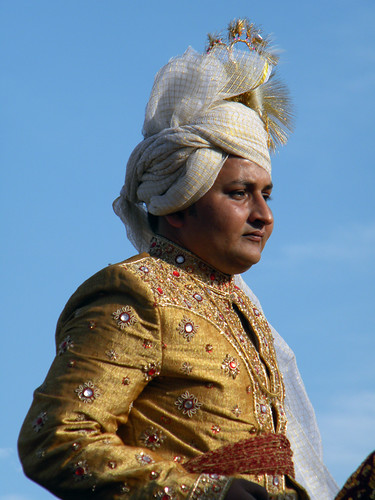 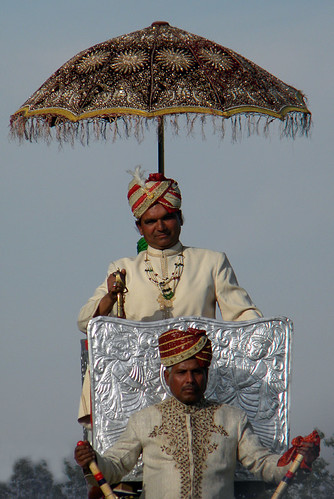 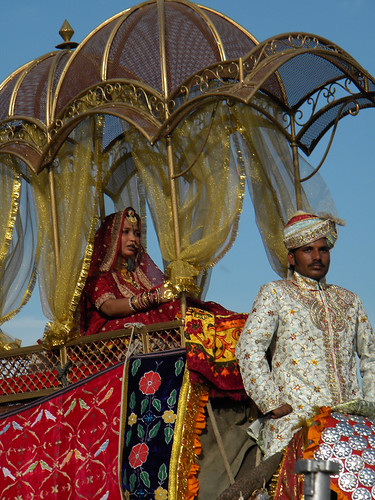 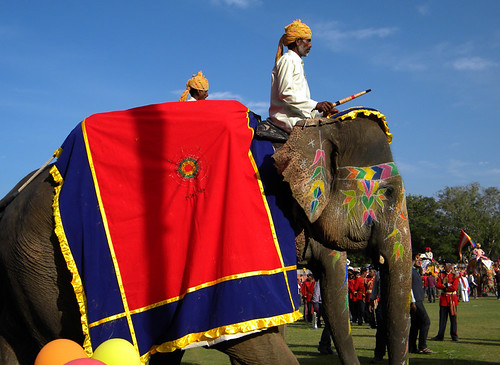 Meanwhile I stood back and videotaped everything on my low-res video – mostly shots of the heads of tourists in front of me and voice of the announcer pleading, “Everyone at least clear the left hand side of the field…” and “Will the police please move everyone off the field…” and “The press photographers need to leave the field…” and my favourite, “Has anyone found two purses with money in them?”

The only result of these announcements was that now the police and press were all over the field as well. This was all I could see. 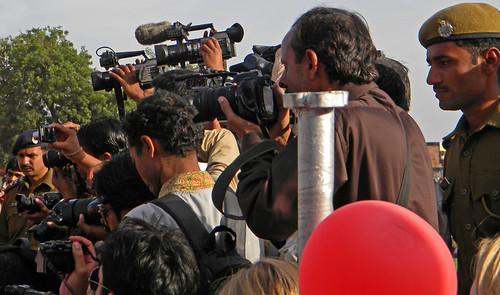 The elephant judging took forever as the numbers the mahouts held up didn’t match the announcer’s description, “Number 82… which is number 82?”

The winning elephant at the Elephant Festival was this one, painted with a tiger eating a deer. 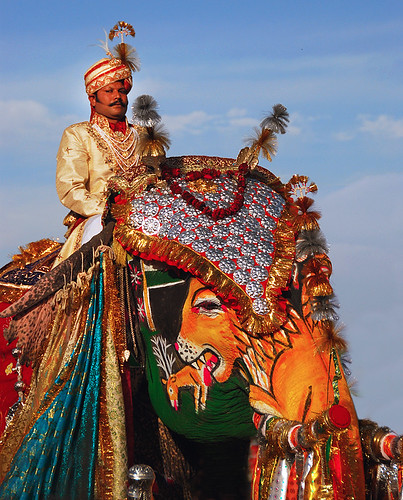 Close-up of the eye of the tiger, ummm elephant. 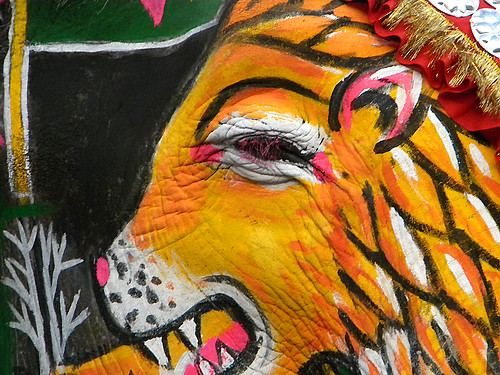 There was some sort of tourist race with women running a course with jugs of pink water on their heads; also a tug of war where the rope apparently broke.

In 2017 Jaipur’s Elephant Festival starts on March 13, coinciding with Holi, the Spring Festival of Colour.

4 responses to “The Elephant Festival in Jaipur, India”