Some rules of the road for travelling in India!

The traffic in India is insane, with big trucks and buses all jockeying for position, and smaller moving objects (motorcycles, cows, cars, elephants, tractors, pedestrians, camels, bicycles, auto-rickshaws, chickens, etc.) wedging themselves in between the larger vehicles. 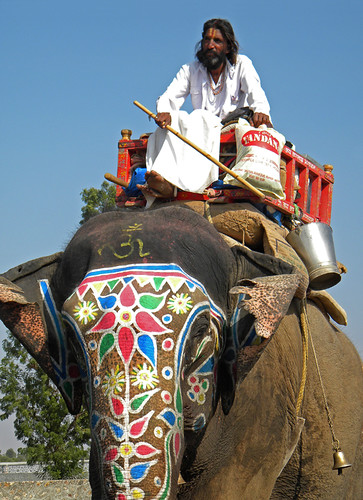 On our first bus ride in India we discovered that the largest vehicles, or perhaps I should say the vehicles with the loudest horns, drove down the middle of the road forcing all the smaller moving objects to scramble for space along the edges.

Surprisingly, this actually worked quite well. Or at least until another large vehicle came barreling down the middle of the road in the opposite direction; then a game of chicken ensued with both vehicles veering away at the last second, and all the smaller moving objects flying off the road in every direction.

I was sitting in the window seat on the side of the bus away from the traffic, and couldn’t see much but Al, who could see, told me, “You really don’t want to see this anyway!”

On a different trip we took a taxi from Udaipur to Jodhpur (as recommended by our friend Phil). Thus we were in a small car on a narrow two-lane road with barely enough room for a goods-carrying truck or bus in either lane.

Al had scooped the front seat next to our driver, much to my annoyance. I thought, “Damn, he’s going to get all the good pictures.” 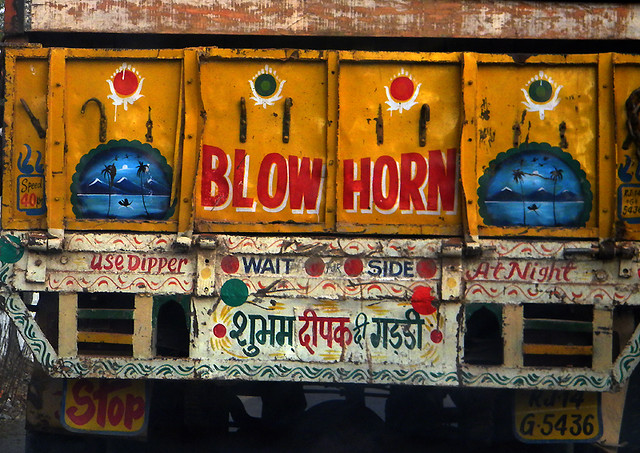 Being in the back I couldn’t see much but I did learn a bit about road signals in India!

Just ahead of us a bus actually used its blinker to indicate that it was heading over to the wrong side of the road. Suddenly it swerved across over the road to pick up some passengers who were madly signaling for it to stop.

Despite its obvious intentions our driver tried to whip around it as it was crossing in front of us, going off the road on to the verge, and almost mowing down the people waiting for the bus.

This Russian roulette of vehicles can get really exciting, especially when trucks carrying hazardous chemicals or highly inflammable contents get involved.

Later an opportunity came up to switch seats with Al (he was begging me actually) but I clung to my back seat. Here is a barely averted head-on by two trucks that have avoided each other by a bare millimeter or two; a third truck is careening along on the verge full of smaller moving vehicles.

‘Blow Horn’ or ‘Horn Please’, one of the few traffic signs in India that everyone obeys.

I should mention that all these photos were taken by Al in the front seat while I cowered in the back shooting video – after all, you don’t have the real experience until you hear all the horns!