Today is the 100th Anniversary of the Battle of Vimy Ridge. My grandfather was in the Regina Rifles, one of the Canadian Battalions that ‘won’ the Ridge but was almost decimated in the fighting…

I knew very little about the First World War before going to Vimy Ridge.

At the site they showed me how the Canadian Archives worked, and with some help from my friend I found out that my grandfather had been in the 28th Battalion (also known as the Northwest Battalion or the Regina Rifles), one of the Canadian Battalions that ‘won’ the Ridge but was almost decimated in the fighting. 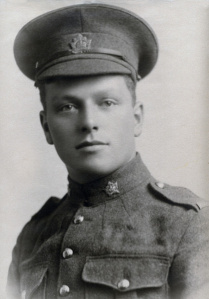 Granddad with a friend and fellow Canadian during the First World War.

Although he lost a lung due to a gas attack, my grandfather survived the fighting, went back to England where he was first billeted and turned my English grandmother into a Canadian war-bride. He still looks so young!

2 responses to “Remembering the First World War at Vimy Ridge”