1637 was date of the collapse of the world’s first speculative bubble, all created by a passion for tulips.

In Holland people mortgaged their houses to buy and sell tulip bulbs for ever-increasing sums of money. This was so lucrative that many bought the bulbs before they even existed in order to sell to someone else, a method that guaranteed the collapse of first financial bubble.

If you’re in Holland in April/May you will find plenty of tulips, and often at considerably more reasonable prices than the 1600s. 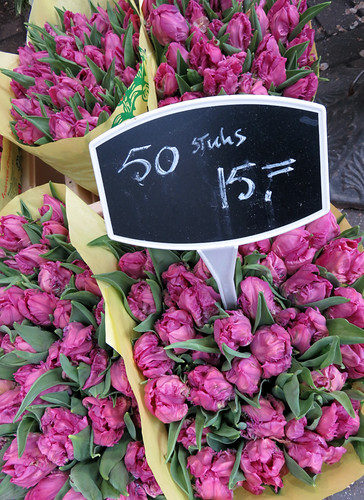 There have been several novels about this crazy time that you may want to take along with you on a trip to Holland. You can read them in Amsterdam’s Café Chris, a historical pub that was around when the crisis happened!

The Black Tulip by Alexandre Dumas.

Written in 1850, Alexandre Dumas, the swashbuckling writer of The Three Musketeer’s fame, focused on one aspect of the tulip craze: an extravagant prize of 100,000 guilders for the creation of the mythical black tulip and the criminal things people would do to claim this prize.

This cover features a detail of the painting called The Flower Market at Amsterdam, painted in 1673 by Gerrit Berckheyde.

Tulip Fever by Deborah Moggach. I didn’t have an image of the book so I made up my own.

This period romance is a story of an artist who gambles on the crazed tulip market of 17th century Amsterdam in order to raise money to run away with a married woman whose portrait he has painted.

Deborah Moggach is the author of These Foolish Things which was made into the hit movie The Best Exotic Marigold Hotel. This story has also had a movie made of it, due to come out soon.

The Tulip Virus by Daniëlle Hermans

A mystery novel with two brutal murders, one of a tulip trader in Holland of 1636, and the other a man in 2007 London holding a 17th-century book of tulip paintings.

The murders are tied to the coveted Semper Augustus, a tulip with a virus that caused the flower to contain streaks of red and white, famous for being the most expensive tulip sold during tulip mania, and also one of the most tricky to cultivate as the virus made the bulb unstable and prone to failure.

From Wikipedia: Gouache on paper drawing, before 1640, of the Semper Augustus.

8 responses to “To Read in Holland: The Tulip Craze (and the First Financial Bubble)”