After a problem-free transit ride from the airport, we went in search of our hotel, having taken note of a comment on their website that it was ‘not that easy to find’.

Bit of an understatement, that. The search involved climbing up and down the stairs of multiple overhead pedestrian crossings with my hefty wheeled suitcase, one that had never been designed for stairways like this.

After a half hour of trudging up and down in the heat and humidity that is Bangkok I was on the verge of collapsing from heat exhaustion.

Al, usually not affected by the heat, told me he almost mugged someone for their bottle of water.

All the Thai people on the street were super helpful, often asking us if we needed help before we asked them, and even phoning up to find directions. A couple of times we had to stop them from running off with our hotel voucher in their enthusiasm.

We eventually got sent in the right direction and arrived at our hotel. It was tucked away off an alley, and when we saw what appeared to be permanently stalled traffic on the nearest main road we realized that getting there by air-conditioned taxi was never an option.

I was not acclimatized in any way – heat or time zones. Hungry, not hungry, exhausted, perky. Even though we were smack dab in the city centre, surrounded by highrises, somewhere out there was a rooster who was just as discombobulated as me – crowing in the mid-afternoon.

Since then, the one thing I demand to acclimatize myself to the Bangkok heat is a swimming pool. Our choice, the Sathorn Grace, was close to the Myanmar Embassy with a rooftop pool, and only about 30 dollars a night.

Thanks to the pool, a delicious Thai dinner, some cold Leo beers and a good night’s sleep we were well on the way to recovering the next morning. (See Navigating a Thai Menu: Chile Ratings and Condiments)

On the plane my ‘Asian’ breakfast had consisted of gummy pork noodles accompanied by pickled sesame seaweed. I suspected that there would more of these weird Asian breakfasts in my future so that first morning I opted for the familiar: a breakfast of strawberry/mango French toast and iced coffee served up with a dollop of wifi. 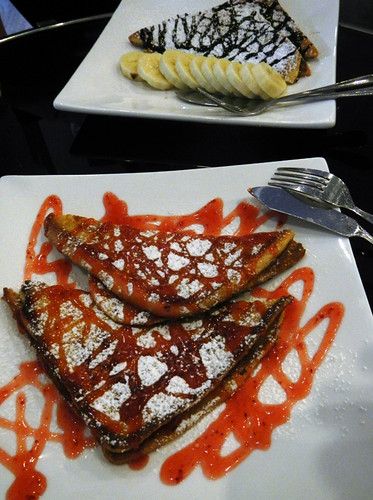 The waiter in our breakfast joint wandered out with some red syrupy alcohol in a shooter glass – I wasn’t sure who was imbibing so early in the morning but it turned out to be the spirits in the Spirit House.

Breakfast done we headed out into the sweltering heat to find the Myanmar consulate and get a visa. (Getting a Visa for Myanmar in Bangkok.)