Today we were off to the Doolin Ferries to see if we could figure out the schedule to the Aran Islands — the information was quite obscure online. 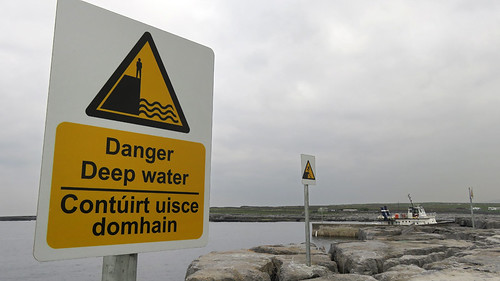 At the ferry dock we were immediately accosted by two different ferrymen, both intent on dragging us into their little offices.

We were captured by the ferryman #1 (Liam) who made a lot of patter about how great his ship was etc. and told us that normally it was 25€ pp for the ferry to Inisheer including a detour under the Cliffs of Moher on the way back. For us, though, a special deal: 40€ for the both of us. And only 30€ if we paid ahead of time.

Before we took it, however, we were allowed to go to listen to second ferryman’s deal “since he’s shouting so much.”

The second ferryman offered the trip for 20€ pp and so back we went to Liam and we booked for the next day.

As we left Al commented, “Doolin Ferries should really be called Duelin’ Ferries…”

As it turns out there were a lot more ferrymen trying to sell tours than actual ferries – and it seemed that all the ferrymen were selling a tour on the same 10 o’clock ferry. So much for their special boats!

The rainy view out the window of the Queen of Aran ferry to the Aran Island of Inisheer. 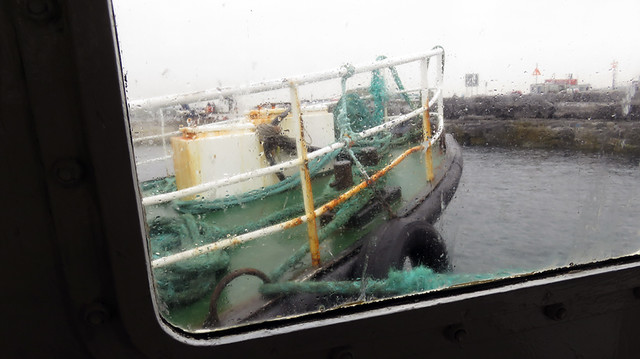 Someone suggested we stay overnight on one of the islands, and although we didn’t do it, it would have been fun – there were a fair number of places available considering the size of the island. 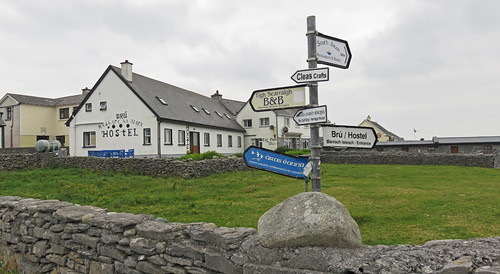 A map showing the highlights of the island given out by the bike hire place. 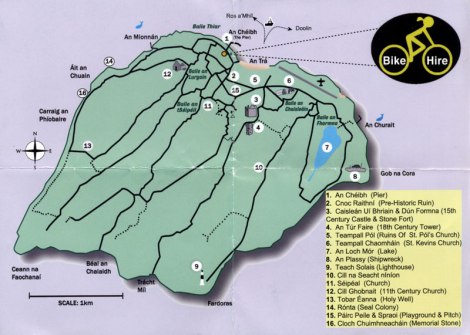 We chose to walk the island – it didn’t take all that long and was delightful as the rain had stopped by then.

Our first stop was the cemetery. Here is one of the many Celtic crosses with the castle ruins off in the distance. 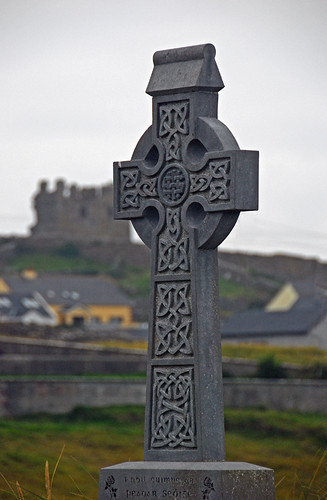 A friendly border collie on the road. 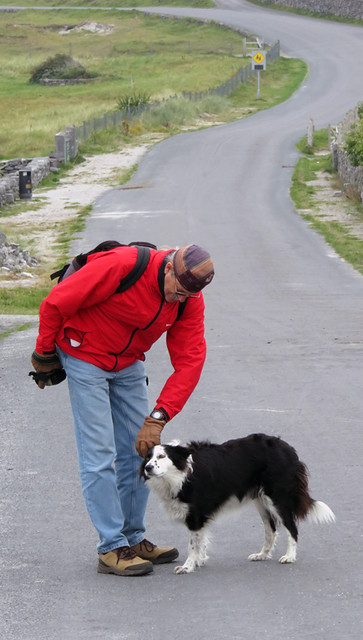 A horse cart is another way to get to the shipwreck, although by the time we had walked there the cart had come and gone three times. 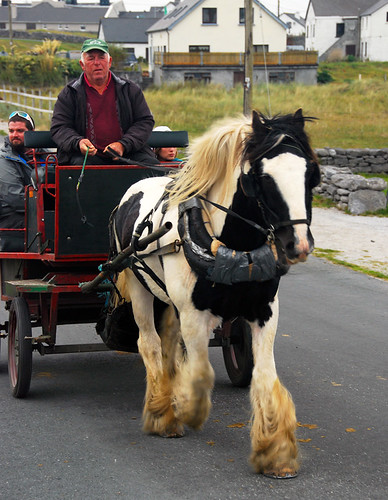 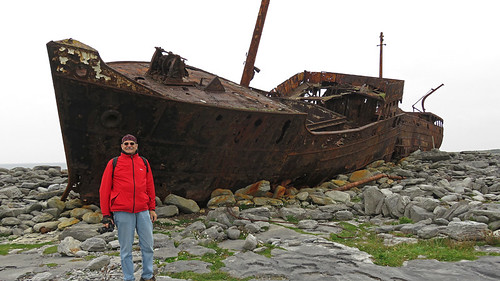 Everything on the island was made of rocks and more rocks. I have never seen so many rocks in all my life! 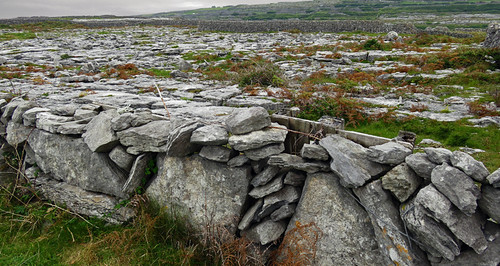 From there we climbed up into the hills to see the the 15th century castle and fort up close. 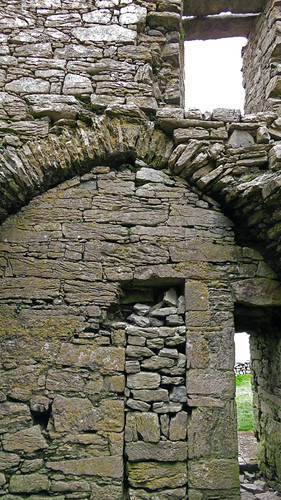 A megalith (and in the background, a plane coming in). 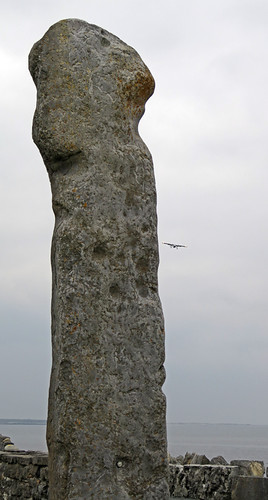 At three we were heading back for lunch at the pub in the village. 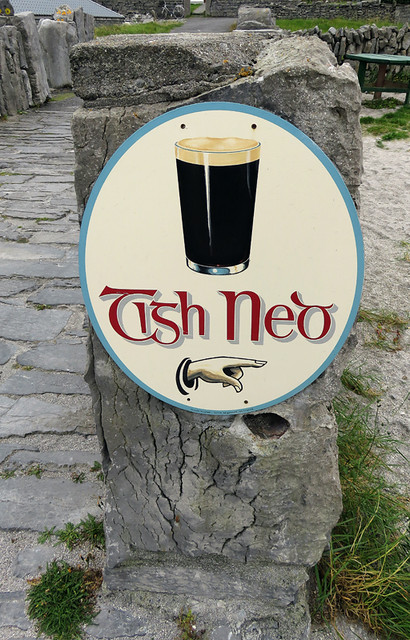 I was just chilly enough to have an Irish coffee… 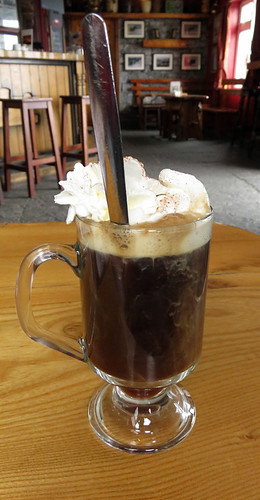 …followed by a Stonewell Cider (tastes like scrumpy, yum) along with a panini sandwich with roasted peppers, red onion, Brie, spinach and pesto – perfect! 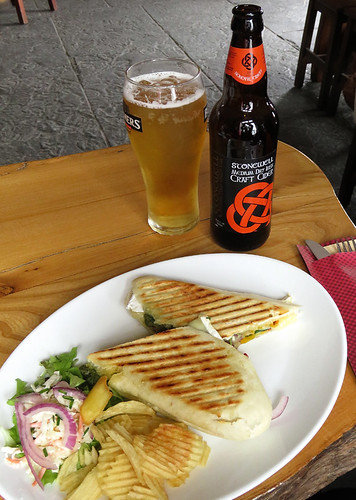 After our late lunch, the sun came out and we had time to explore the rocky beach on the other side of the village the ferry back didn’t arrive until six. I’ve put some of the fantastical rock textures from this beach as well as around Doolin on my art blog. 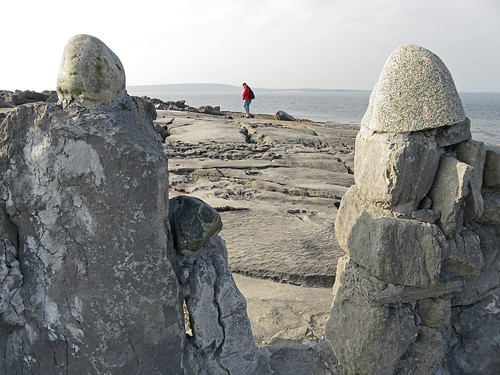 5 responses to “The Aran Island of Inisheer in Ireland”