I always try to find a good selection of books to take with me when I travel and here are a few books I read while travelling through Myanmar, and this time I photographed them all while actually in the country.

Burmese Days by George Orwell. An absolute must-read classic novel about Burma. After a huge search I found it in second-hand book store in Penticton of all places. But when we got to Myanmar it was available all over the place so the purchase could have waited until I arrived.

The Glass Palace by Amitav Ghosh.

The ‘palace’ in the title refers to this Royal Palace Complex. The story of its destruction at the hands of the aggressors of Burma forms the backbone for the story of the country.

This is a fictional but fact-based history of the country as told from point of view of an Indian immigrant in Burma. It starts with the British invasion of Mandalay and the spiriting away of the king of Burma and his family to India. It follows the stories of this Indian’s extended family as they become caught up in the historic events, carrying on until 2010 when Aung San Suu Kyi was released from house arrest.

The cover shows the U Bein Bridge in the foreground and something that sort-of resembles the royal palace in the background. In reality these two are quite a distance from each other in the sprawling provincial town of Mandalay.

The Native Tourist: In Search of Turtle Eggs by Ma Thanegi

While staying on the beach at Ngapali I found this charmingly illustrated journal of a pilgrimage throughout the country. I have no idea if it’s available anywhere else in the world but if you find it grab it!

Rudyard Kipling’s poem ‘Mandalay‘ was written when he was 24 years old. About it he later added:

‘When I die I will be a Burman … and I will always walk about with a pretty almond-coloured girl who shall laugh and jest too, as a young maiden ought.’ 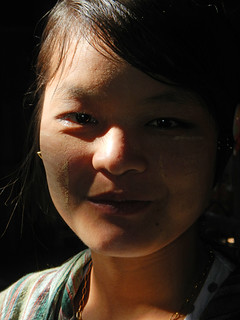 A couple more that I haven’t read but hope to in the near future are:

The River of Lost Footsteps by Thant Myint-U, the grandson of U Thant, Secretary General of the UN in the 1960s. This is a history of Myanmar with a mix of personal and global references. ‘Read it before you go and you will marvel at how the once great and rich cities like Martaban, Syriam, and Mrauk-U have been transformed into the dingy and smoky villages of today.’ Note that the cover shows the U Bein Bridge just outside of Mandalay.

From the Land of the Green Ghosts by Pascal Khoo Thwe. This writer who gives an account of his growing up as a Paduang-Hilltribe-Guyand in the difficult political environment before turning into a rebel himself.

The website Too Mutch For Words has loads of armchair travelling in Myanmar with a list of non-fiction books about the country along with films and music.

2 responses to “To Read on the Road: Myanmar”