The last Glen Scenic Loop Drive just outside of Ballycastle—A side trip to Dark Hedges again, just in case it’s less crowded (it isn’t)—Dinner is $25 for a bowl of soup!

The bulk of the day had been spent exploring several of the Nine Glens of Antrim, followed by a stop at the marvellous ruins of Dunluce Castle, a stroll along the beach at White Rocks and some great final shots of the castle ruins with the sun was low in the sky and the ocean turned to burnished silver.

This should have been enough but there was still light in the sky and I figured we had just enough time to explore two last Glens of Antrim before heading back to Ballycastle for dinner.

This much-marked map we got at the Ballycastle Tourist office shows the Scenic Loop Drive (red-dotted line) through Glen Taisie to Glenshesk with a side trip to Dark Hedges (# 11).  Here a paper map works way better than Google Maps. When I searched for this loop drive on Google I got Glen Taisie Road, and when I searched for the Nine Glens of Antrim I got No 9 Greenville Road!

The first part of this quick trip was posted in the ‘Irish Weather Is Always Changing‘, as the formerly sunny skies suddenly darkened with a passing storm, then cleared just as suddenly and rewarded us with this rainbow.

Our first stop was an avenue of ancient beech trees known Dark Hedges. It is now famous for being featured on the Game of Thrones, and when we had visited earlier that day it had thronged with tourists. We had hoped it would have calmed down by early evening but people were still wandering up and down the road. I aimed my shots high and hoped that the light was a little spookier than in the morning. 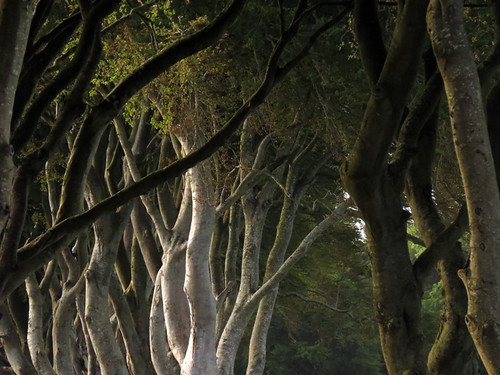 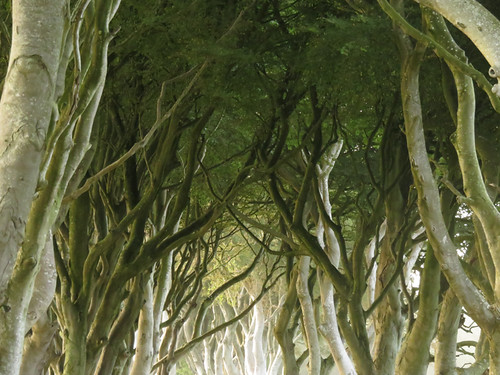 The best part was the rainbow that appeared over the field just outside Dark Hedges. 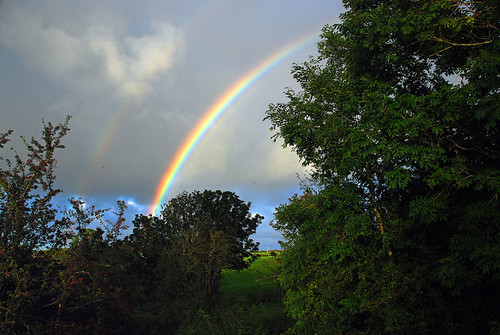 After this we carried on along the scenic route, stopping at an interesting church and tower that weren’t marked on our map. 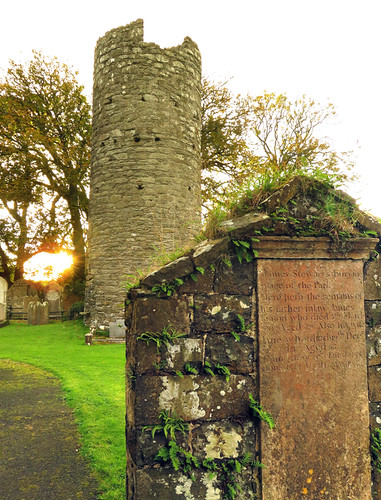 Later I found out that this was Trummery and we were rewarded with both wonderful evening light and yet another rainbow. 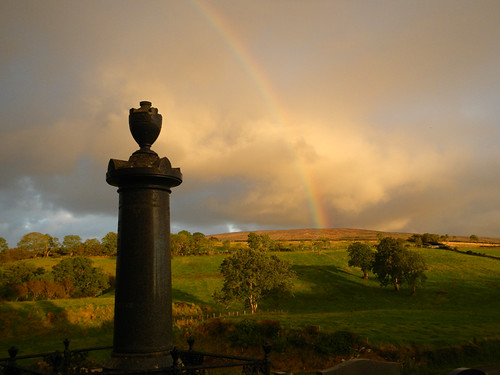 Evening was at the main pub in Ballycastle where we tried out Foxes Rock Pale Ale and Al paid $25 for a bowl of soup – it’s partly the horrid Canadian dollar exchange rate. But still… 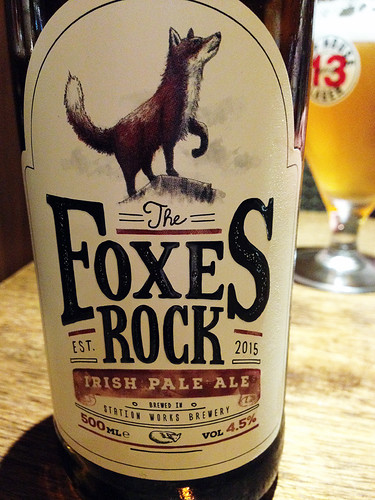 Most of the photos are too dark to post but I had chicken liver pate with a rim of fat, black current chutney, rocket salad and three pieces of nutty soda bread accompanied by another local brew called Rathlin Red.

3 responses to “The Glen Loop, Dark Hedges and Ballycastle in Ireland, UK”