Ms. Vy’s cooking class started with a bike ride out into the countryside to see how some of the food was grown and processed.

Al & I on our bicycling tour of Hoi An’s market gardens; behind us are rice paddies that were being prepared for the first season in December. There are two rice crops every year in Hoi An which is located halfway between the north and south of Vietnam. Saigon in the south has three crops a year; Hanoi in the north only one.

It wasn’t until I did a post on ‘Transformation’ where I took those muddy rice paddies behind us and slowly transformed them into a bowl of noodle soup that I realized everything that goes into food we eat.

All that work, just for a bowl of noodle soup! 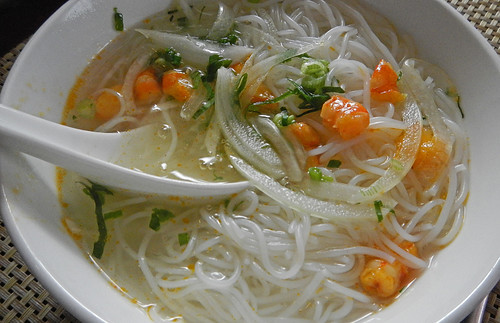 This is one of my favourite posts, favourite because I learned something profound just in the process of putting it together, and I only went through the rice part of it – imagine what I would have learned if I followed the route of the rest of the ingredients: Transformation of a Muddy Field into Noodle Soup.