The Amber Fort, which consists of the Jaigarh Fort and the Amber (pronounced ‘Amer’) Palace is an UNESCO heritage sights near Jaipur.

It was a short bus ride to the Fort although, as usual, the conductor didn’t give us change like he did to all the other passengers. (At the time I thought all the bus and train conductors were deliberately working against us but I later learned that we should have been handing out bribes to get any consideration as to seating!)

Being a proper fort it was at the top of a steep hill, a long hike up from the bus stop to the fort, and once inside the wall another hike to get up to the Palace complex. Many people opted to ride an elephant up and enter the main gate like a 17th century Rajput Maharajah. 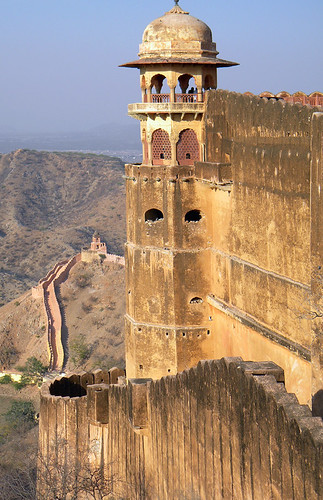 The palace complex was built primarily with sandstone in several different colours, an earthy red, a terracotta orange and a golden ochre. 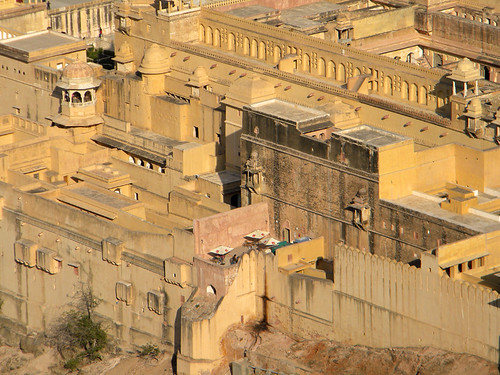 Once inside the palace the place was beautiful, with elaborately decorated walls. 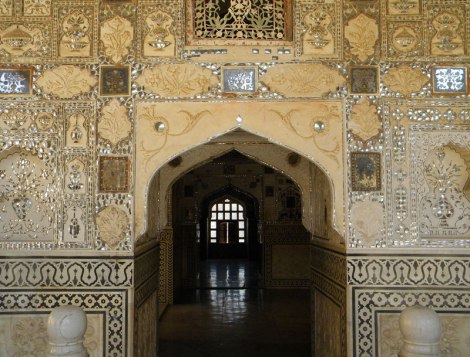 This is a detail of one of the tiny flower mirrors that are above the entranceway in the photo above. 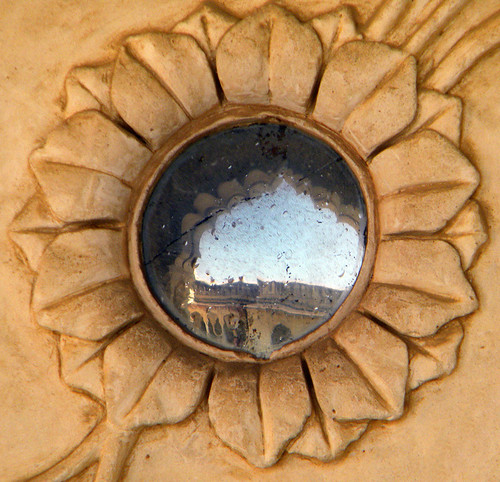 Marble columns and archways formed accents throughout the buildings. 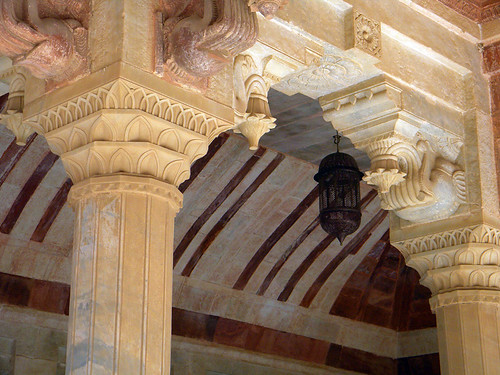 The walls were often painted in fanciful Islamic designs that included geometric patterns and floral motifs. 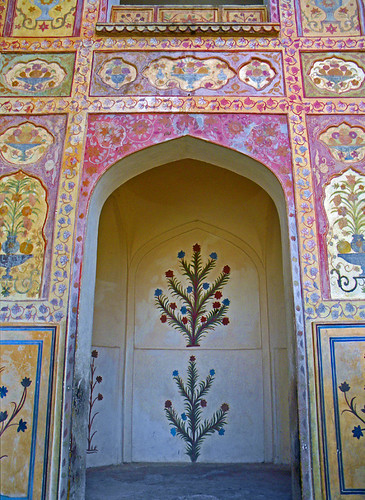 We did not hire a guide like most people and didn’t learn too much about the palace other than what we heard listening in to other people’s guides. The most beautiful rooms were the queens’ and concubines’ apartments with the more favoured ones getting the biggest apartments and best views. 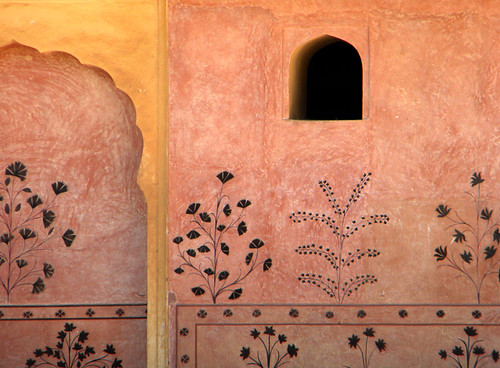 For them it was a beautiful prison, never seeing the outside except through their windows of pierced sandstone. 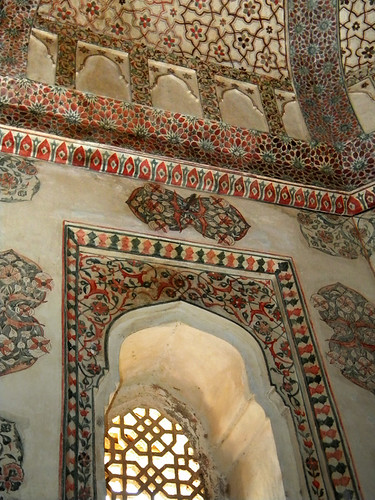 A decorative plaster ceiling embedded with mirror mosaic tiles was designed, it is said, to give one of the prisoner queens the illusion she was sleeping outside under a twinkling star-filled sky. 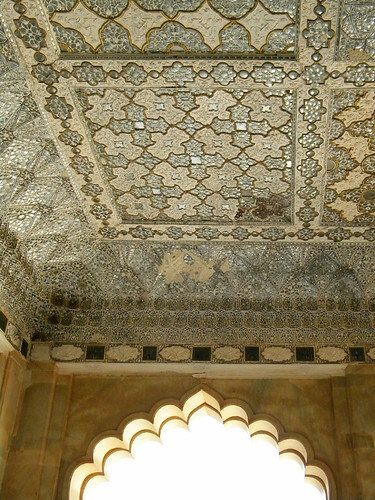 From the apartments there was a view of the formal Islamic-style gardens, usually with water in pools and fountains but not the day we were there, and possibly not at all in the winter as it was a very comfortable 70 to 75°F for most of February. 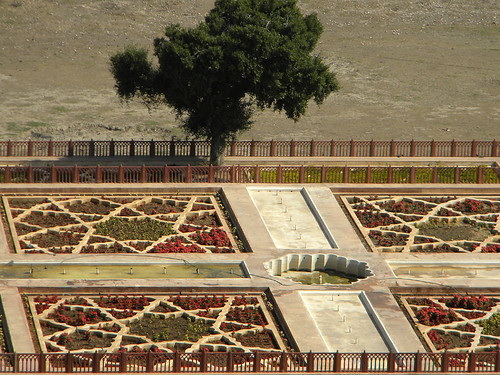 The gardens were in sharp contrast with the scrubby desert beyond. 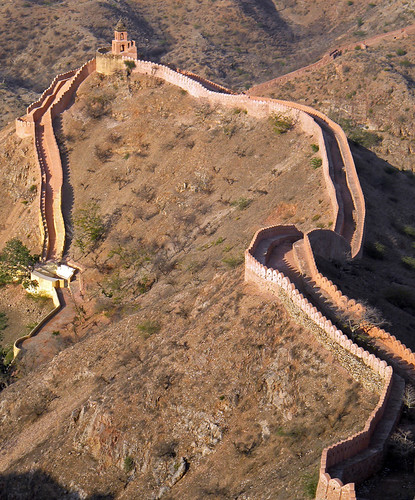 There were still some cannons left in the watchtowers; this one was filled with a pigeon nest instead of a cannon ball. 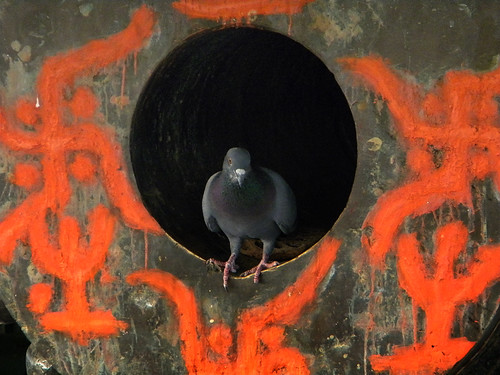 In the main courtyard there were a number of animals including a grumpy cobra, 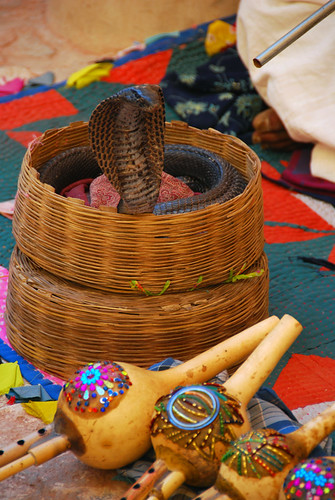 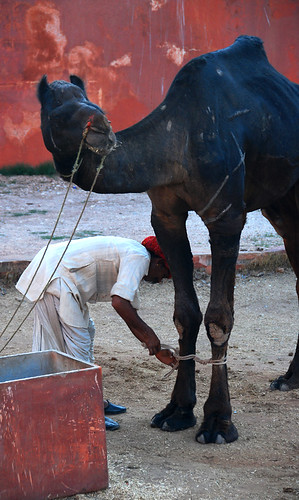 And one of the elephants to ride to and from the palace on. 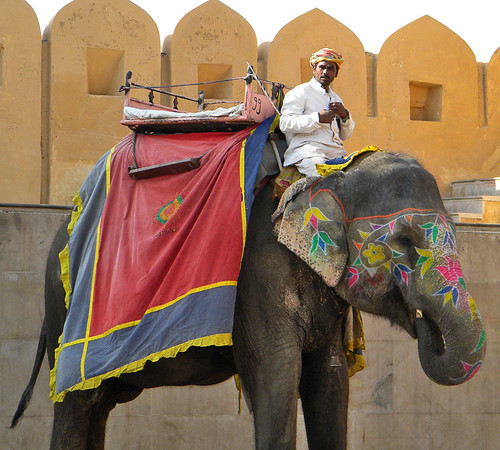 The setting sun turned the walls brilliant orange and created zigzag shadows from the spiralling stairs. 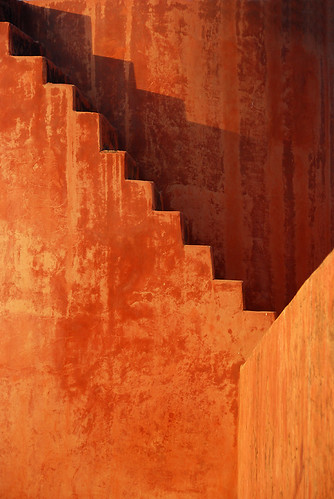 Elegant peaceful langur monkeys relaxed atop the fortifications and watched the sunset. (More on our more interesting experiences with the monkeys of  northern India.) 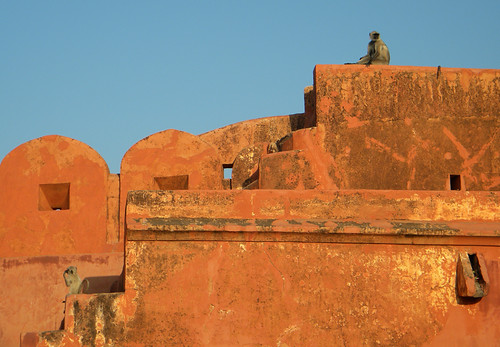 Looking back at the setting sun – no wonder the monkeys were so impressed! 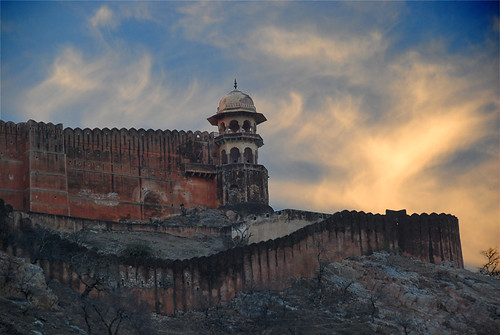 As the light leeched out of the sky the place took on tones of an evil fairy tale. 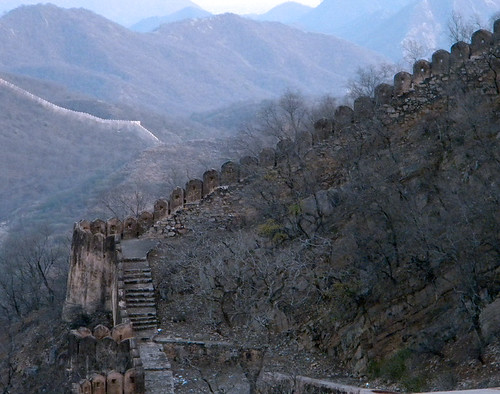 One last view of the peaceful langur monkeys. 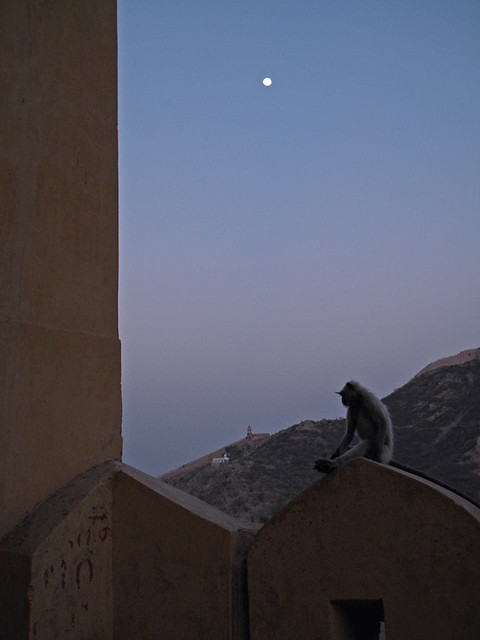