We were in Jaipur for Holi, the festival of colours that marks the end of winter in India. 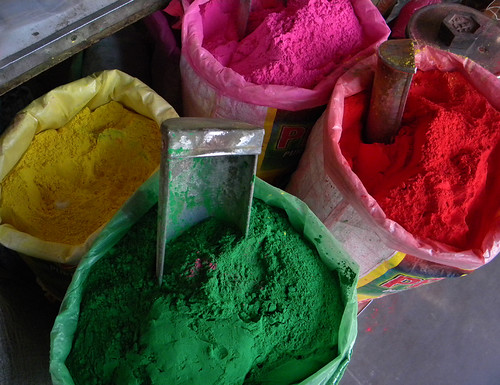 The week before Holi mischievous boys bombarded us with squirt guns, pushed home-made ‘fart’ machines into our knees, and attempted to insert sticks into the wheels of rickshaws; dressed-up characters wandered the mall pretending to hold us hostage for a small fee, and Al went shopping for special ‘Holi Pants’.

The day before Holi women began laying out piles of twigs and brush on the streets in preparation for bonfires, adding brightly coloured kites and pretty arrangements of cow patties as a final touch. 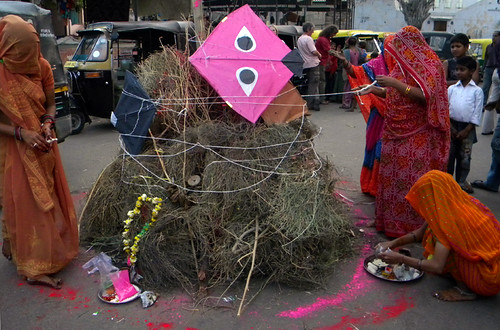 Later that evening the women disappeared, and men and those ever-mischievous boys milled around the piles of wood. As we were going down a narrow lane in a cycle rickshaw, some of the boys jumped onto the back of the rickshaw, making our poor driver lose his momentum and almost collapse in exhaustion. One of the bonfires was lit just as we rode by and went up with a whoosh; the heat was ferocious.

The next morning we went out in search of Holi celebrations. The sound of drumming led us to a roving gang of men and boys shouting and dancing, and we followed them down a street aways. Most appeared somewhat intoxicated as they exuberantly smeared us with coloured powder. A middle-aged man kept the younger ones from knocking us over in their enthusiasm. 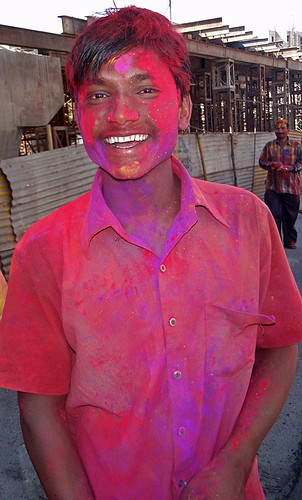 Deciding that this was a situation that could easily get out of hand we caught a rickshaw into the old city, racing past rows of police cars, riot police, paddy wagons and fire trucks; the city obviously well prepared for any ‘holi-gans’. 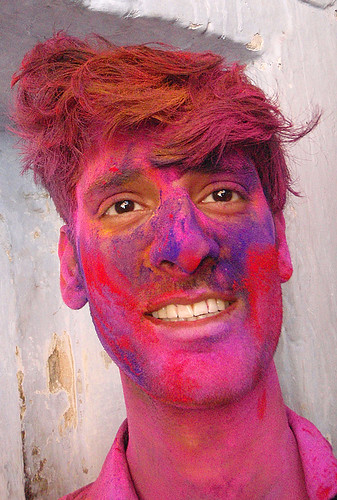 Our first stop within the old city walls was a small Hindu temple where we found a crowd of pink and purple men clustered up and down the stairs. 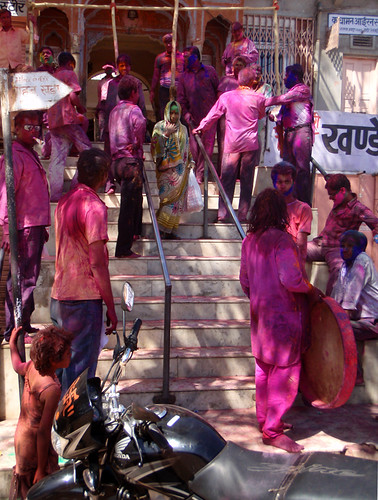 This was a sedate and religious situation, with several children in attendance along with the men. 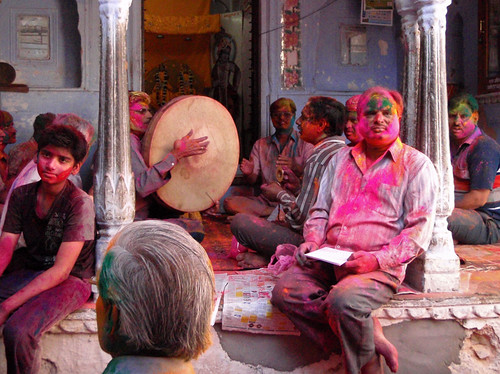 One of the children, a little boy with Down’s syndrome, was given the happy job of dabbing colour all over us. 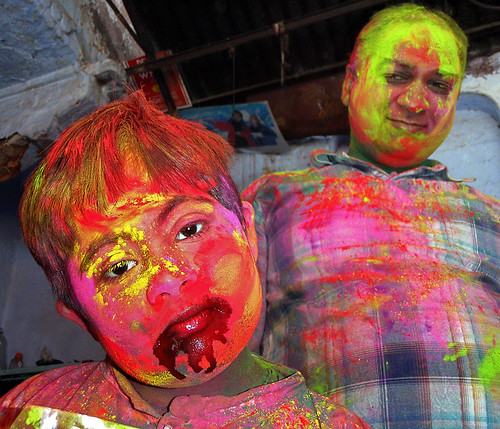 To the beat of a drum and chanting, a ‘special Holi drink’ was served to us, sweet, a pale creamy yellow with pink rose petals floating in it. 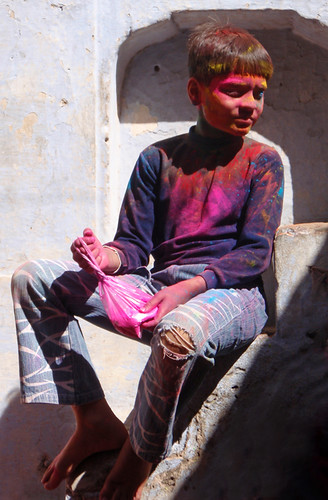 From there we wandered over to another temple where everyone was departing. Inside we found only a cow with its forehead anointed with colour, and a drunk who was loudly berating an orange-robed monk. The monk was standing next to a shrine that contained an idol of Krishna and several bowls of coloured powder. Just as I was about to take a photo he flicked the curtain closed in front of the shrine. 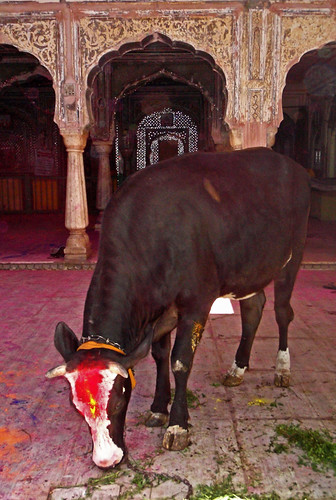 Outside, Al pointed out a large congregation of men further down the street, “Oh look, there’s another temple over there.”

I squinted, “No dear, that’s a liquor store…”

The next temple we found was larger and almost empty except for one of the first women we had seen that day sitting on the floor with her two children. In front of them were several small bundles of various grains and chickpeas and they were painstakingly peeling the husks off of them.

The woman spoke quite good English and explained that she and her family lived in the temple, and that she was preparing for a traditional Holi ceremony. Her husband came out of a side room and offered us a drink similar to the one we had been given in the first temple, telling us it was made from milk, curd, ghee, honey and rose petals.

He then went behind the curtain in front of the shrine, and his wife explained that the curtain was closed because it was time to dress the idol in his new clothes, and that it had to be done in privacy. The idol was of the child Krishna, and she told us they treated him as if he were a real child, placing milk in front of him at breakfast and lunch, and putting him to bed at night.

Her husband flicked open the curtain of the shrine to reveal Krishna in his sparkly new clothes. As the man lit a small flame in a bowl of oil and waved it over Krishna, his assistant and daughter daughter hit gongs. After the ceremony the assistant who brought out a tray of round balls for all to try; they tasted like uncooked cookie dough, a favourite when I was  a child.

Outside on the street the crowds were getting rowdier, and motorcycles sped by loaded with drunken young men doubled and tripled up. 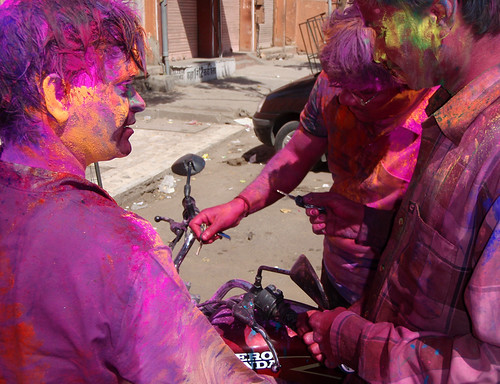 We stopped by one flower stand to take photos and were garlanded with a bunch of marigolds. At the next flower stand, the inebriated vendors flung more marigold garlands over our heads, and gave us green hugs. 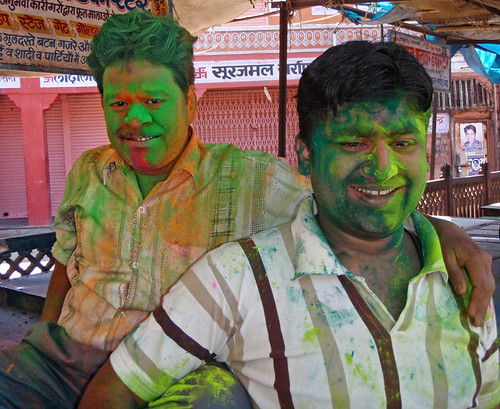 This was not the first hug I got that day; there were a lot of young men that enveloped me in a hug and called me ‘mama’. It could have been because I was wearing a ‘chiffon’ over my head to protect my hair from becoming stained from the colours tossed all over me.

I got an orange hug from this guy –  he called me ‘sister’. 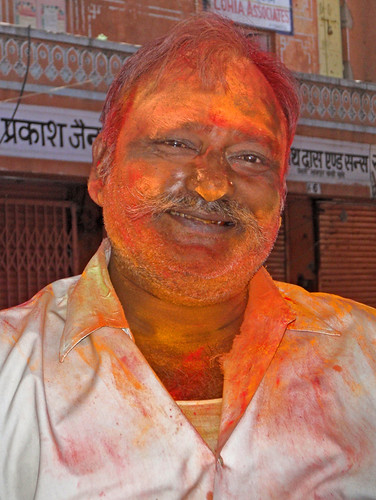 Shortly after noon the whole street scene was got so crazy we hired an autorickshaw and retreated to our guesthouse. Just as we were paying for the ride some more young men ambushed us, hugging us and demanding 100 rupees to let us go. The owner of the guesthouse came out and told them to ‘piss off’ in Hindi, and then turned around and told us to go take a shower before we got coloured powder all over her nice clean guesthouse!

The afternoon was spent quietly reading books and watching other tourists trickle in, all covered with coloured powder, and some with stories of being groped and having stones thrown at them in certain alleys.

Some of the colours, especially the reds and oranges, were quite penetrating and the next day some of the tourists were still quite colourful despite their showers.

Note: In 2018 Holi begins this evening of March 1 and carries on all of the next day.

One response to “Holi, the Festival of Colour”