Editor/Daughter’s Note: My dad wrote up several journals of his memories. This story starts in Langeland, Denmark where he was born in 1921.

Langeland where I was born has been described by romantic women as the ‘Rose in the Sea’.

It is roughly 30 miles long and 3 to 4 miles wide. At the time I was born there the fences were few and far between, and the ‘no trespassing’ signs were as absent then as they are today. So even now there is the freedom to roam and little has changed.

We went fishing in the many ponds in the fields. Often there were pikes in the ponds and also eels, considered a delicacy all throughout Denmark and caught in large numbers. I understand that the eels migrate between the Caribbean and Denmark.

At that time in my childhood, when winter came, crews of men belonging to cooperatives broke up the ice on the ponds and hauled it to large, underground cellars where it was used for refrigeration, the only kind known at that time. The ice was insulated on top with several feet of straw bales and would last all year.

Dairy in Nordenbro, Langeland where my dad lived from 1921-31

Milk and ice cream was often kept in wooden buckets with ice and salt as the salt would decrease the temperature.

In the heat of the summer we trotted off to either side of the island for a swim in the sea and strangely our parents never worried about us.

The family also went picnicking in the old Ford wagon and most often to Ristinge Klint. The klints (cliffs) had many kinds of flint in various colours, a big trade item in the stone age five thousand years ago.

The southern tip of Langeland is Bagenkop village where for miles the beaches are made up of perfectly rounded stones.

There are many graves from that period though the Bronze Age, Iron Age and not least the Age of Vikings. Just north of my childhood home is King Humble’s grave; he left many a descendant in England when plundering that country. 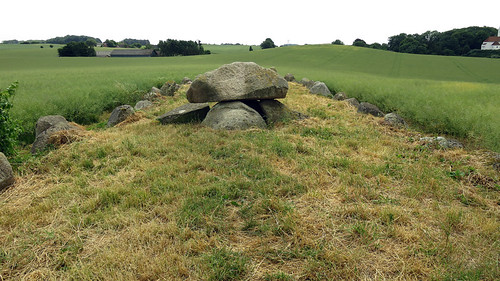