Note from Editor/Daughter: After my grandfather’s creamery went broke in the great depression, my father was ‘farmed out’ to his uncle Peter’s farm on Siø. My dad was 14 at the time and had just left school.

My uncle Peter too had his problems in the dirty thirties as he was forced to sell his cows and pigs at a fraction of their value.

I was a bit of a runt at the time so was given light jobs to begin with, but in the 18 months I lived there I went from 90 pounds to 130 pounds.

Arriving there in the middle of the summer was like coming to paradise compared to the cement jungle of Aarhus; there were no restricting streets or traffic.

But that did not mean that I was not being tested by those I worked with. The crew at the farm always gathered at the windmill in the morning to get their work orders for the day. One morning the foreman told me to take a 150-pound bag of grain down to my grandfather’s place to feed his turkeys without telling me how I was to achieve this.

I tested my limited strength on that sack of grain and could barely lift it. Then I got an idea and went for my 10-year-old cousin’s play wagon, laid it on its side next to the bag and tipped both together. It worked and so I wheeled it down to my grandfather’s place.

The next morning when gathered at the windmill the foreman asked me how did you get it down there and this street tough kid told him, “You figure it out!”

As for the windmill it was one of those with sails on the wings and was operated from below by ropes fastened to levers up high. The mill was for grinding grain to feed some 40 milk cows, 12 horses and 100 pigs that provided the day-to-day income to run the farm. There was a miller in charge and he also looked after the pigs and horses.

The farm, besides two tractors, also had six teams of horses that made up a pecking order as the strongest and youngest horses were driven by the number one teamster, and then on and so on down the lane to the last old faithful driven by the last teamster hired on.

One teamster quit and I was next in line which meant getting up in the morning at five and grooming and watering the team, very important as it creates a bond between team and teamster, and I have seen a few horses go to bat for their handler almost like a dog would.

I mentioned here my grandfather. He had worked on the farm but broke his back in an accident with runaway horses spooked by a howling wind. He was paralyzed from the waist down at seventy years of age and sat in a wheelchair for the next twenty-five years.

My uncle would go down with me and we would help him in and out of bed. We took turns and we would also sit and talk to him about all the things that had been done or happened on the farm during the day as well as politics and other news.

My grandmother was there but was hard of hearing and hearing aids had not yet been invented. She was also very forgetful making a lonely life for her.

Also living in their home was my aunt Marie who did the cooking and household chores, as well as teaching fourteen children in the one-room school, children ranging in age from five to fourteen years.

I had six cousins, Kirsten, Ellen, Hans, Ingeborg, Birgit and Erik. The other children on the 400-acre farm belonged to married farmhands who lived in their own homes near the wharf, the Svendsens, the Andersens, the Millers, and the herdsman, Knut.

The island’s wharf was a 600-foot-long stone dyke with pilings at the end and a deck over them creating a circular platform wide enough to turn around a horse drawn carriage. 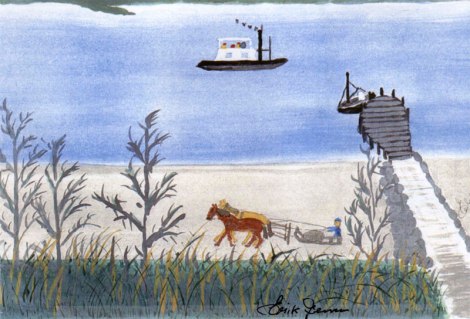 *The reason that my uncle was nicknamed King Peter is that he refused to pay property taxes to the municipality on Langeland, as he claimed that they never paid anything whatsoever for anything on Siø and that the island was totally self-sufficient. This was true and the courts were on his side until the federal government built a bridge that crossed the island with a highway from Tåsinge to Langeland using the island as the center for the bridges on both sides. 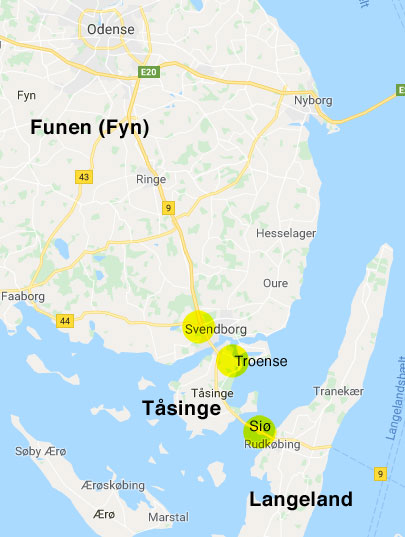