Editor/Daughter’s Note: During the Second World War my dad lived in occupied Denmark, moving around the country working on various farms. In 1941-42 he went to the Ollerup School of Gymnastics for three months, something that stood him in good stead when he was later hired by a farmer who wanted a farmhand that could teach gymnastics to his family and other farm workers.

The Ollerup School was built in 1920 by Niels Bukh, a former navy man who served on a boat patrolling the seas between Iceland and Greenland.

Niels Bukh likely got his ideas for his style of gymnastics from the tight quarters aboard ship, making him develop exercises that could be done in cramped spaces. It was based on the passive form of the Swedish Ling gymnastics but turned into a moving flowing form exercise. And so calisthenics was born.

He was a dynamic personality with the ability to lead others and given a lot of support from people who saw his work as a patriotic effort in occupied Denmark. The military men and even the Grundtvig church rallied behind him. Young people donated their time in building the school so it was a highly voluntary and co-operative effort.

I joined the school in the winter of 1941-42 during the Nazi occupation of the Denmark. Niels Bukh did not please the Nazis, and because of his outspoken nature they kicked him out of his school the following year and moved 2000 of their troops into the building.

But Niels had strong supporters and Rigskansler Peder Oxe turned his castle over to him. The volunteers turned the castle into a school and 3 years later when the Germans gave up the Ollerup School, the volunteers stepped back in to make the costly repairs so that by 1947 the school was again ready to go.

As for my own time at the school, my Coach was Arne Mortensen, a very well-built gymnast and banner bearer for the school team. He was a calm and dignified individual, and well liked, and his task was to teach me and other students the art of teaching gymnastics.

Besides gymnastics we were also given classes in arts, sociology and the history and development of politics and democracy.

The days began with a song before breakfast in the dining hall, followed by an hour of gymnastics. Next we were split up into small groups and given leadership training.

After that we could participate in other sports of our choice such as pole vaulting, high jumps, soccer and handball. We also had riding and military teamster training as there were retired military officers teaching at the school, and horses and wagons were provided by what remained of the former Danish army. This photo is of the riding team putting on a show in front of an audience.

After supper all 300 students trained for two hours as one team and this is where discipline was drilled in to us, the goal being to make us appear as if we were one moving force. After three months of intensive training we put on performances in the big cities of Odense and the forum in Copenhagen.

One thing I enjoyed very much was swimming in the underground swimming pool. To get to it we walked through long tunnels, which on the one side had storage rooms storing the produce from the school’s own farm.

I especially remember the large yellow melons of which we all had a large slice for supper and the way it was prepared made it taste like a delicious fruit. 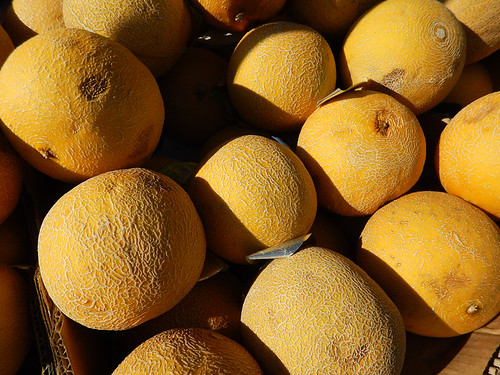 The school farm provided all the meat, milk, eggs, vegetables and fruit used there and the farm hands were volunteers who in turn studied for free at the school. The cost for a student at that time was 1500 kroner, roughly a year’s salary for a farmhand at that time.

When I finished my training there I worked for three months for my uncle Erik planting sugar beets to earn a bit of money. Next I answered an ad for a teamster from a farmer at Haderslev in southern Jutland and my stay there will be the next I tell about.