My Dad’s note about his journal:

Because I am not a very good typist or too good at English grammar I have chosen to heavily illustrate this book. As the saying goes, a picture is worth a thousand words. I figure each picture equals two pages of text so the text I did use is short and to the point.

I have avoided adding in too much negative material as I am inclined to be positive by nature and get the work done that I am hired to do. I have also avoided describing the many personalities I worked for or with, whether they were good or bad, and haven’t added too much in the way of war stories as they somehow rub me the wrong way.

Some of the first black and white photos in the book go possibly back to 1910. I got them by taking photos of my cousin Birgit’s old pictures in her album. Some were given to me when I did not have a camera myself, also a few were taken with an old box camera that I owned at one time.

Dad’s painting of Plato the horse driving his truck. Plato was the horse that came every week to haul out logs that my dad cut when he was working one winter of 1947 in an isolated area of Sweden. The truck came much later, about 40 years later, and I’m not quite sure how Plato transported himself from Sweden to Canada…

When photos were not available I have painted watercolour scenes which I can do faster than I can type two pages of text which constitute about 1000 words. Mind you they often look like cartoons such as Skipper Johannes when the pig went overboard or the last one of Jeppe the ideal horse.

For my descendants who read this it is worth knowing one half of their ancestry and as for the other half I will leave to them to explore for themselves.

Dad on his 90th birthday with his ‘bee condos’ 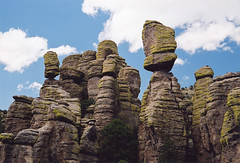