After a fun and slightly ‘oddball’ museum we carried on further down the Dingle Peninsula where we came upon several signs advertising a couple of sites. 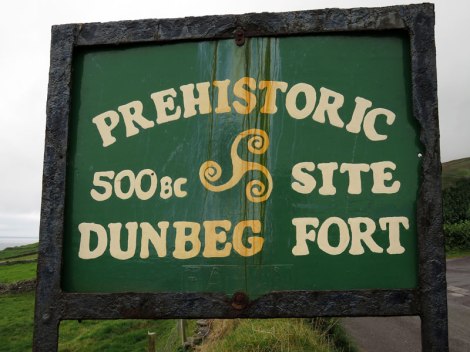 Dunbeg Fort was not as impressive as this sign indicated plus it was 3€ each to get in. 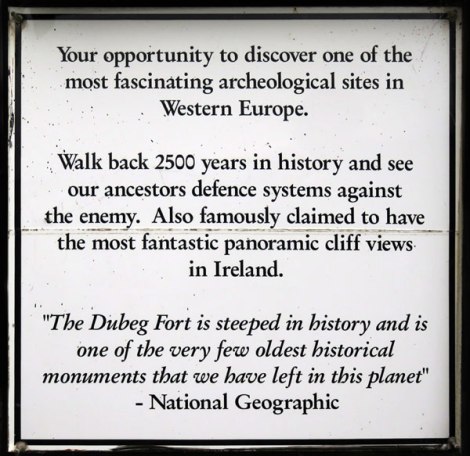 We were starting to learn that ‘prehistoric’ often meant just piles of stones that form various structures, and as we had already found out, Ireland is full of stone structures! 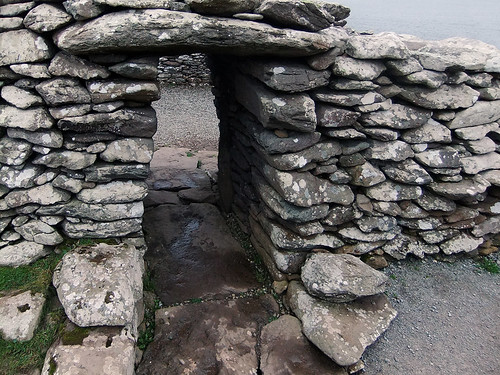 However, the panoramic cliff views were fantastic as promised. 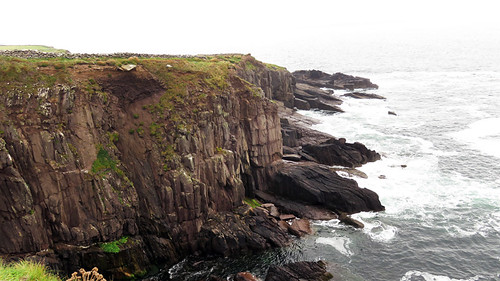 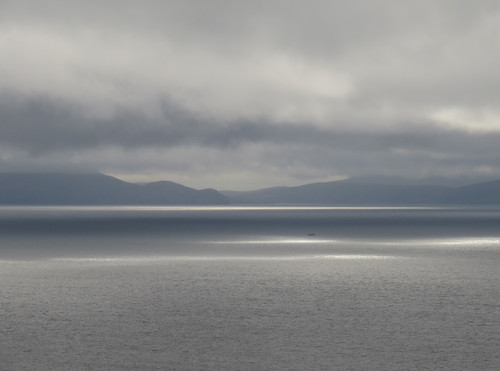 The donkeys were pretty cute too. 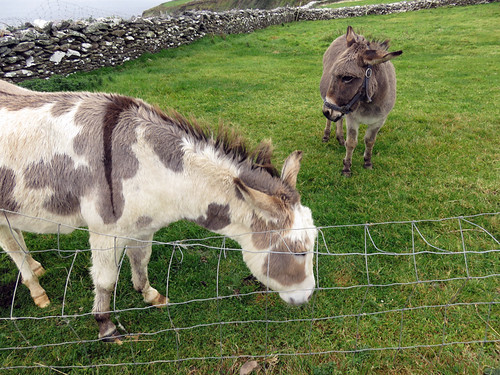 An example of a more interesting stone structure was just down the hill, the Stonehouse Restaurant. 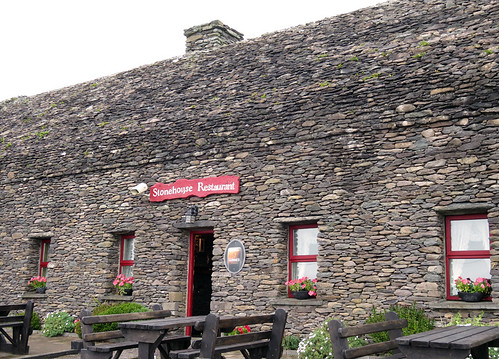 Just up the next hill were the Famine Houses. And here the admission was another 3€ each, there went 18 dollars on these two stops, whoosh… 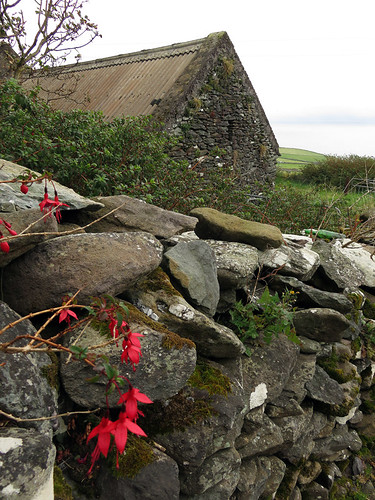 This is an actual Famine House, where the workers lived in extreme cold, damp and poverty. The interior had a dirt floor that was heavy-duty mud the day we visited; the beds were piles of straw; and with no chimney the smoke from the fire could only escape through the entrance way, which had no door on it to protect the people from the elements. 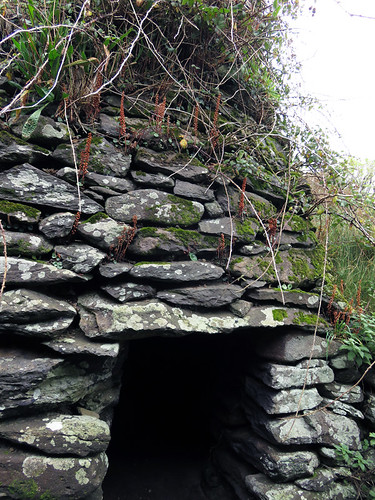 This is in the ‘rich’ farmer’s house – not glamorous by any means but a huge step above the worker’s ‘houses’ and with a working chimney. 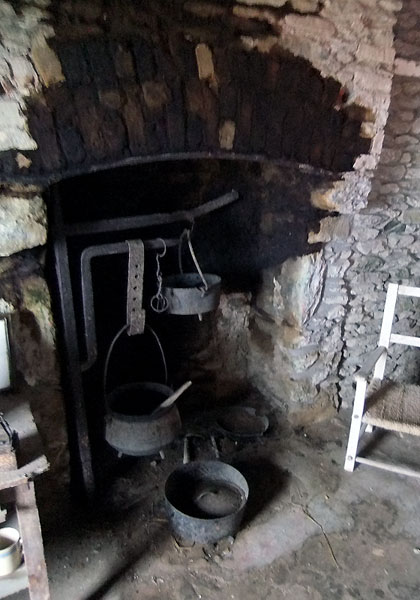 The exterior of the rich people’s houses. 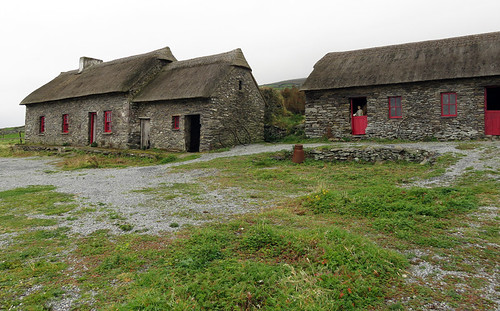 The informational pages posted on the walls stated that the reason for the famine was that the diet of the poor was solely potatoes and nothing else. When the potatoes died from a blight the poor starved.

Ironically the peasant workers had to continue to work to produce other foodstuffs that were available but not to the poor; for them it was starvation amidst plenty.

Most of the meat, fish and vegetables were exported to England, and guarded by British regiments to guarantee landlords and commodity speculators their right to ‘free market’ profits, thus further poisoning the British/Irish relationship.

With over a million deaths from starvation, and the emigration of perhaps another million people, perhaps there is a lesson here about the ‘right to profit’.

A burial site was nearby but fenced off so we couldn’t see it. 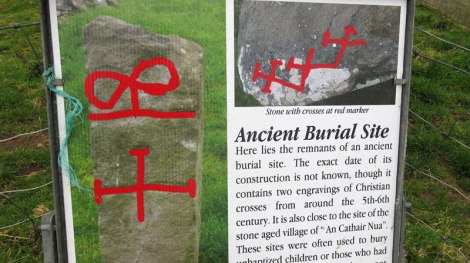 From that point on there were a ton more sights (and a ton more admission charges) but we decided they were adding up precipitously and decided to go for the scenery which was spectacular and (mostly) FREE! 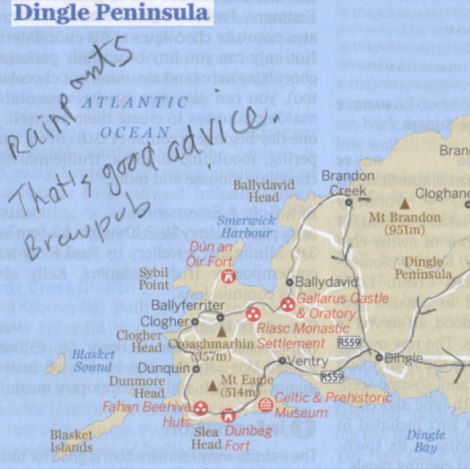 The drive around the Dingle Peninsula: Starting from Dingletown we headed clockwise around the Peninsula stopping first at the Celtic & Prehistoric Museum, and then at Dunbeg Fort and the Famine Houses for a dose of some history. History is pricey so we carried on for the fantastic scenery with a stop at the West Kerry Brewpub, and missed any more of the ‘sights’ in exchange for taking a one-lane detour, one of the many hidden gems we found when using the Wild Atlantic Way app. From there we went to Mt. Brandon and back home to Dingletown and some well-deserved beer and Shepherd’s Pie!

Artsy shot for this post: Famine House on the Dingle Peninsula in Ireland, run through the photo app Snapseed. 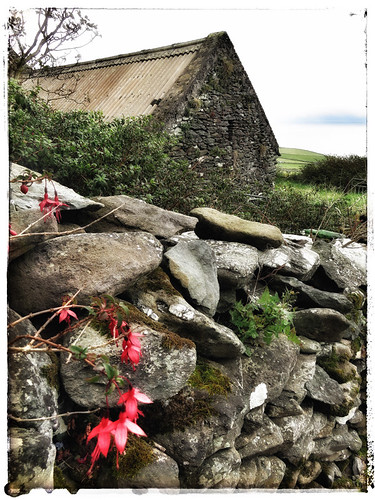