A collection of pieces that caught my eye as having something extra about them.

‘We’, a sculpture consisting of characters from every language in the world in the shape of a human being, or ‘the typical Canadian’ according to a passerby. I don’t think the artist intended it to be a jungle gym though. (Vancouver, Canada.) 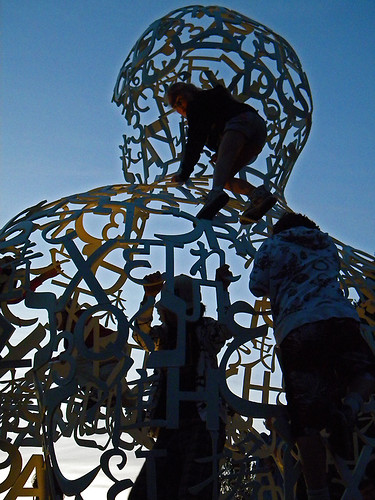 A red metallic sculpture consisting of people joined together in Singapore. 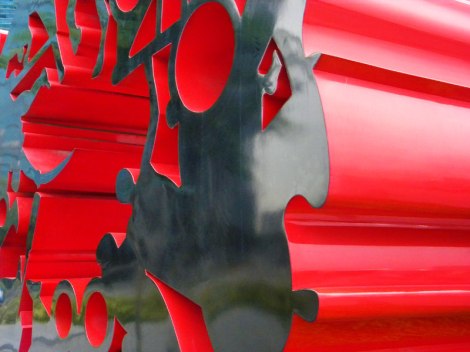 A metal sculpture of the most famous knight, Don Quixote, in Antigua, Guatemala with a cluster of pink flowers stuffed on the end of his lance. 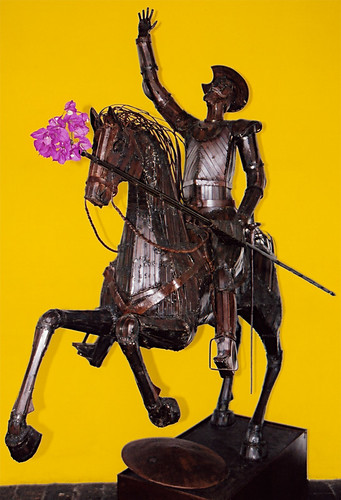 A piece of ‘Fallen Sky’ captured, in the Kroller Muller Sculpture Garden near Utrecht in Holland. 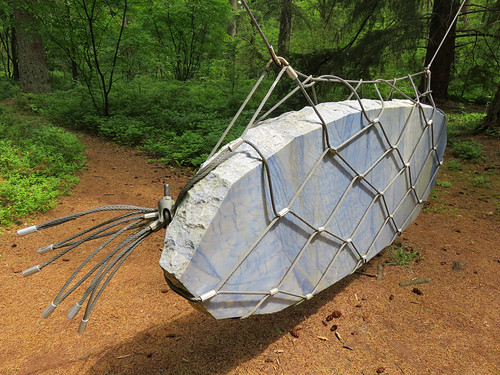 A salmon sculpture wearing a gas mask and skin diving suit in La Conner, Washington, best known at this time of the year for its tulip fields. 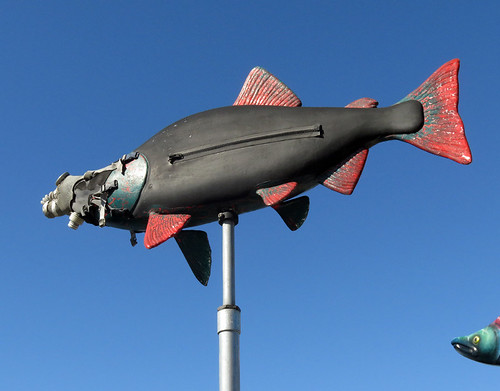 A ship of the dead representing victims of the Irish famine, the powerful Coffin Ship sculpture is at the Murrisk Friary in Clew Bay, Ireland. 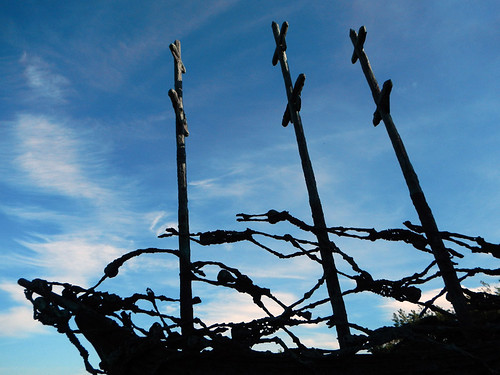 One of the exhibits of ‘Turn Weapons into Art’ program in Siem Reap, Cambodia, a country with a painful history. 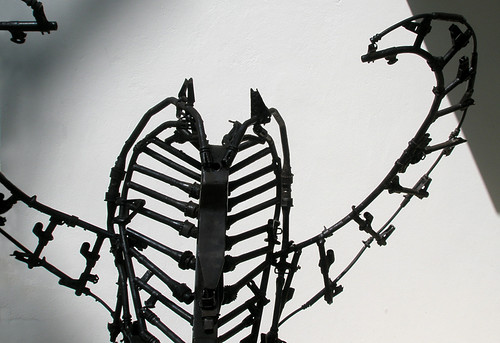 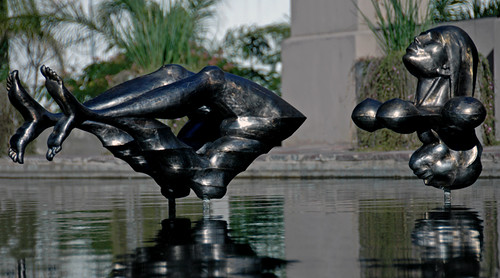 Only in Brussels is the humble Brussels sprout elevated to a work of art (Belgium). 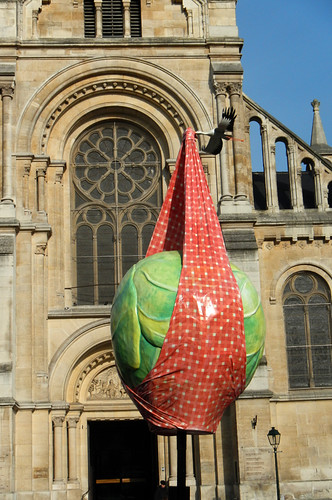 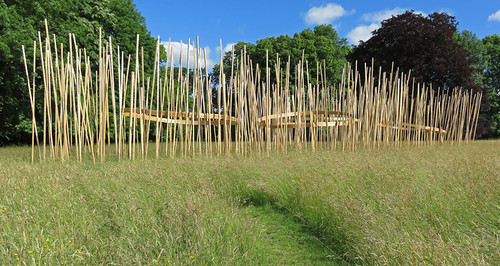 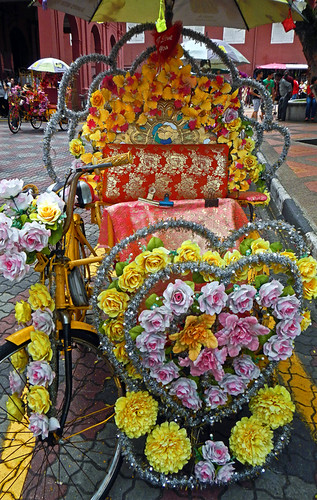 Mexico is a land so full of creativity I didn’t know where to start but finally chose my favourite statue on the Puerto Vallarta Sculpture Walk along the Malecon. Called ‘The Subtle Stone Eater’ by Jonas Guitarrez, it was inspired by the sound of the waves washing over the rocks. The artist made his black shiny belly of obsidian, a black volcanic glass found inland where the volcanoes are. 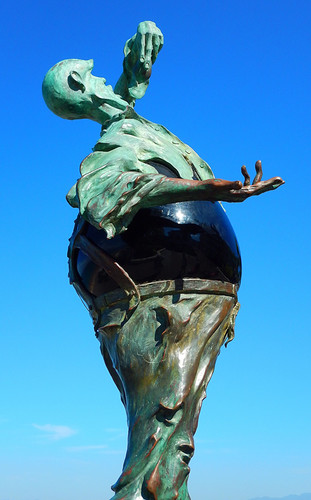 A wooden statue of the White Rabbit from Alice in Wonderland in the town of Llandudno in Wales which claims to be the inspiration of the writer Lewis Carroll. 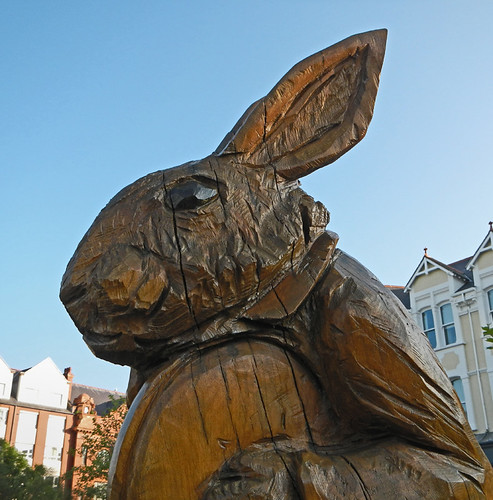 A building whose spiral steeple is made up of twisted dragon tails in Copenhagen, Denmark. 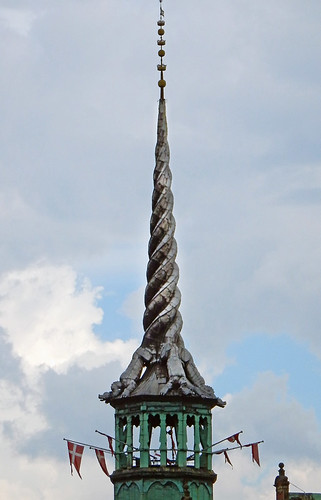 Magical flower lights at Chatuchak Market, Bangkok’s Weekend Market Weekend Market in Bangkok. The owner had just filled an order for 2000 strings of these bougainvillea lights that had been sent off to France. 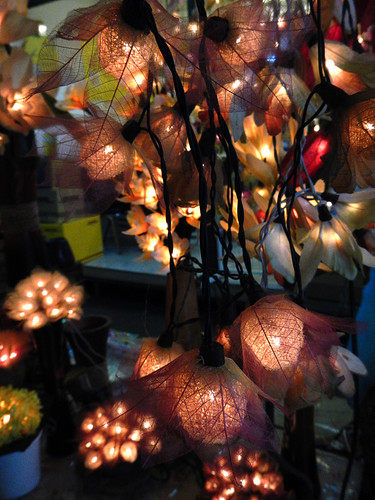 4 responses to “Creativity Around the World”