Tales from the Crab Catcher (and other stories told along the boardwalk).

From the East Sooke Regional Park we headed out to the Boardwalk at Ed McGregor Park. It was shorter than I remembered, but always good for a story or two, a great place to talk with the locals (and drool over the crabs they’re catching).

Last time the story came from a French Canadian who was living on a bum boat in the harbour. He had gotten drunk one  night, fallen into the water and gotten tangled up in his lines; thought he was going to die. 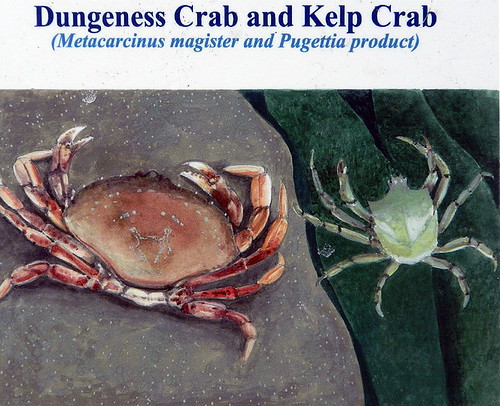 Sign showing the two most common crabs off of the dock

This time we met a busy crab fisherman who regaled us with stories as he went about his work.He was full of admiration for the Ontario Fish & Wildlife Branch, who had the power to search vehicles and fine $125 per illegal crab. BC has the same law but don’t bother enforcing it.

At this point I recalled a recent story of a woman in Vancouver who had just indiscriminately pulled the claws off a few hundred crabs and threw them back to die. “Exactly! In Ontario they would have taken her vehicle, boat and put a lien on her house for that kind of shit.”

He pulled in a crab trap teeming with Dungeness crabs, and frowned, “They’re all females.” 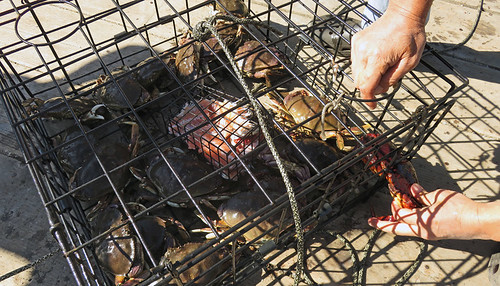 How can you tell? “It’s the private parts, the males are more angular.” This is how to hold a crab when you want to check their private parts. 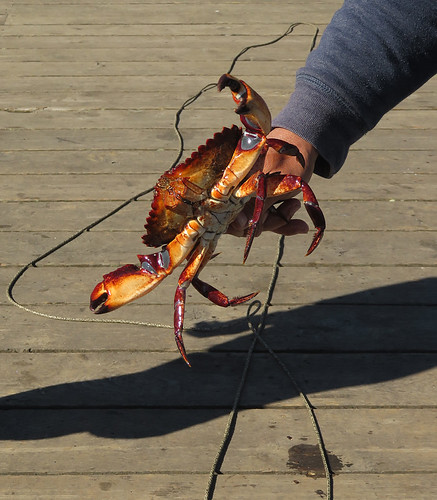 The males have a V-shape and the females a U-shape. This is the lone male in the catch – all the rest were sent scuttling back to the water to produce more crabs in the future. 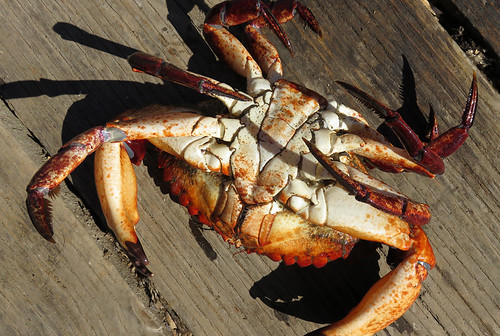 The second basket was a disappointment. Even though he had used “salmon eggs, the very best bait” there were only two crabs, this purple one (a male) and the other so small it fell out as he dragged the basket up onto the dock. 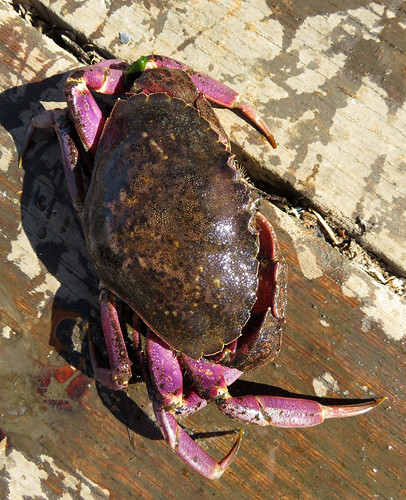 A wall of a local hotel contains a sampling of the variety of crabs in the region. 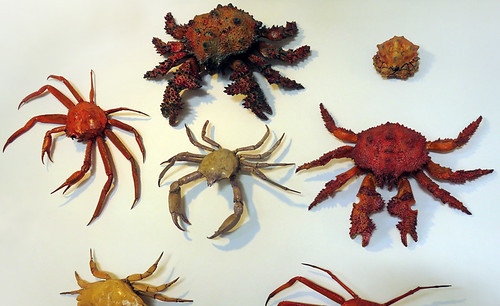 Another crabber joined us; he had paid $40 year for a sport permit saying “catch two and it has paid for itself”.

Which brings me to a very sad fact – Dungeness crabs have become very popular over the last few years, and have gone from $25 for a Singapore Chilli Crab at our favourite Malaysian restaurant to $78, tripling the price in a very short time.

From both crab catchers we heard complaints about sports fishermen stripping the coast of abalone. “I used to find them a foot long; now they’re 3 inches on average.”

One last look at the boardwalk in the water. 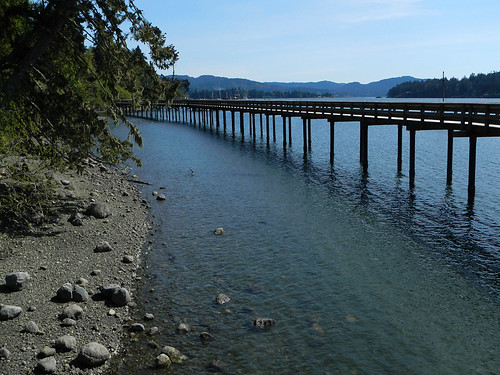