Coming from Moville our first stop was Malin Head, the most northerly point in Ireland, and then we carried on for a drive around the Inishowen Peninsula, coming around and ending up in Milford, where we had booked a hotel room for that night.

It had been a tad tricky to find a room in the Fanad Peninsula in late September. Eventually we found a hotel in Milford on booking.com.

We went through the front doors of the hotel and entered into a huge and deserted room. There were voices coming from the back as we passed the empty bar into the cavernous banquet room. Someone finally appeared and led us through room after room after room until we reached a different front reception, this one with an actual receptionist.

Once ensconced in our room we realized it was almost 4:30 and we hadn’t had lunch. We waved off the offer of a 20€ pp breakfast at the hotel and set out for a drive in a search of an early dinner and any sights along the way.

The first place we came to was the Beachcomber Bar in Rathmullan. But despite the promise of ‘bar food’ on the sign outside they no longer served food there.

However they did have our favourite craft beer in Ireland, a delicious Kinnegar Scraggy Bay IPA.

We split one and chatted with an old surfer sitting at the next table. He told us he still swam every day in the cold sea and his build showed it, huge shoulders and almost distorted arms, reminding me of a seal.

He was full of interesting stories about the history of Ireland.

From here we went off for a drive on coastline of the Fanad Peninsula, past Knockalla, an Irish surfing beach, and up to the lighthouse at Fanad Head before heading back to Milford.

Back on the road we went past Knockalla beach with its surfers. 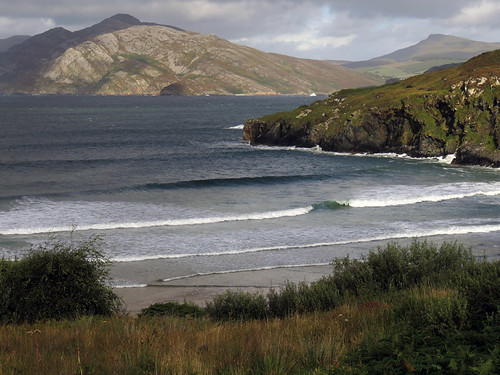 There was a lighthouse on northern point of Fanad Head and a ‘wee sharpness to the wind’ as one of our fellow lighthouse watchers commented. 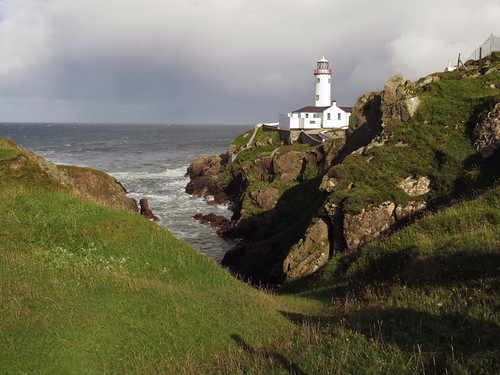 Lonely Planet map of our route through County Donegal in Ireland.

Our next stop was Conway’s Bar, a lovely little place, but it turned out that they only served food on Fridays, Saturdays and Sundays.