After visiting a batch of beaches in County Donegal we were off to Slieve League, on a road that a local had promised us would be one of the worst in Ireland!

The woman in Portnoe actually shuddered as she described the narrow twisty road that awaited us at Slieve League. But when we got there the road was so wide and relatively straight that you could drive a tour bus up it, and sure enough, when we got to the top, there was a whole bunch of tour buses in the parking lot.

We parked by a gate that blocked the road, and from there it was a long walk to the cliffs. As Al pointed out several times, we could have driven – most people just opened the gate and drove on through to a higher (and much closer) parking lot where there was an ice cream caravan and a woolies shop.

A set of rocky steps lead up a path to a viewpoint at Slieve League in County Sligo in Ireland. 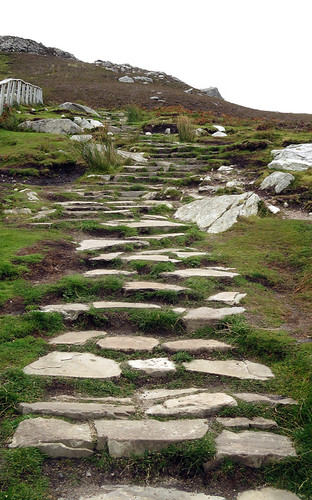 Panorama of Slieve League (and bus loads of tourists).

Looking out to sea.

We should have gone for this Sliabh Liag View Walk – hanging out with a bunch of tourists made the place not nearly as impressive as I’d hoped.

Still, it had its moments. 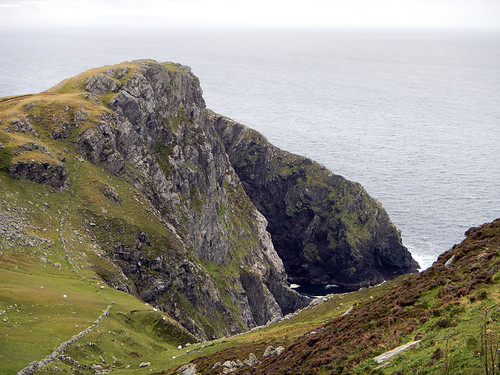 Natural stone formation that look like tombstones in a graveyard. 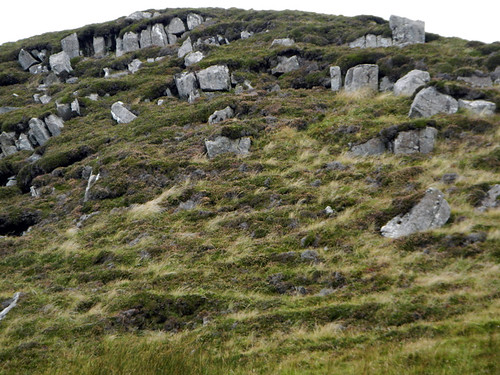 A pond looking as if it was dug out by glaciers.

On the way out we passed a fun-looking pub called the Rusty Mackerel. 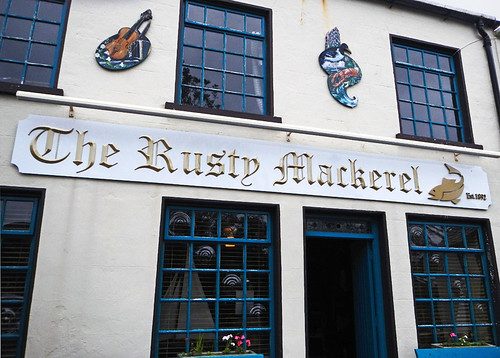 The bartender at the Rusty Mackerel near Slieve League in County Sligo told me his favourite weather expression was ‘it could be worse’. “Of course that really means that it could be better, but that’s not bloody likely…” 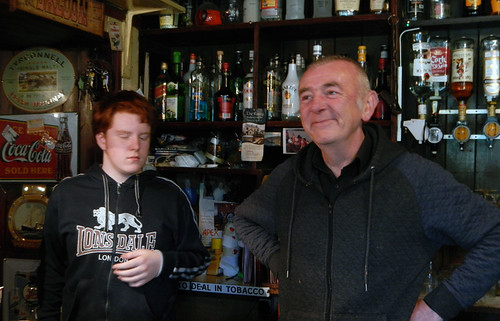 After a stop there we went to the town of Donegal where we had booked a place for the evening. We did a quick tour of the town as the sun was setting. 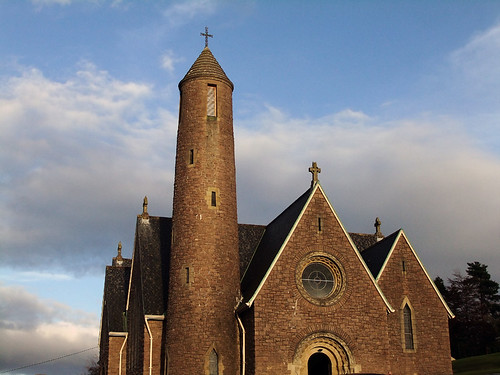 The bartender at the Rusty Mackerel had recommended the Reel Pub for their music but that didn’t start up until 9:30. We were exhausted from all the beaches we had wandered along during the day so we settled into the Olde Castle Bar for a Red Hugh Brew and some dinner, and by 9:30 we were in our room sipping on a local pear cider so no Irish music for us.

One response to “Slieve League in County Sligo, Ireland”