Over the years reptilian creatures have been slithering their way into my art work making me think that maybe it’s time to feature a few – this time the Monitor Lizard, a close relative of the Komodo Dragon.

A smallish monitor lizard in a tree at Khao Yai Park in Northeast Thailand (Issan). 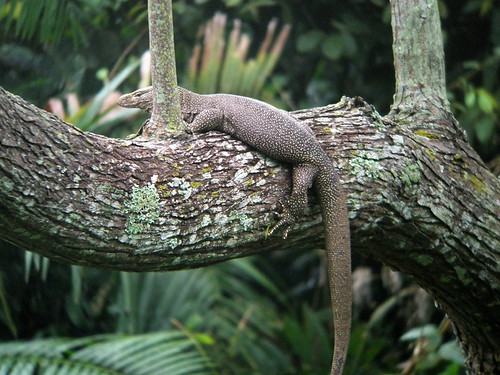 A somewhat larger Monitor Lizard at a park in Bangkok. 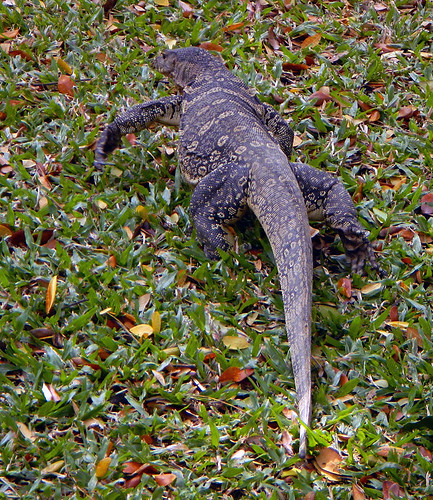 Another Bangkok Monitor Lizard. This one hangs out at the Dusit Palace.

On Koh Roc in the Andaman Sea in the southwest of Thailand these giant monitor lizards came crawling out of the surrounding forest as soon as lunch was served. I’m not sure if they were after the food or the Singha!

If one of these evil devils bites you you will die a painful death from bacterial poisoning. We kept our distance, partly because the guides said that they have a particularly toxic bite, and partly because they were large enough to swallow a small child. This big guy was around six feet from tip to tail, and there were three more just like him who all came out to join us for lunch.

The other place we saw Monitor Lizards was on a canal in Melaka, Malaysia. 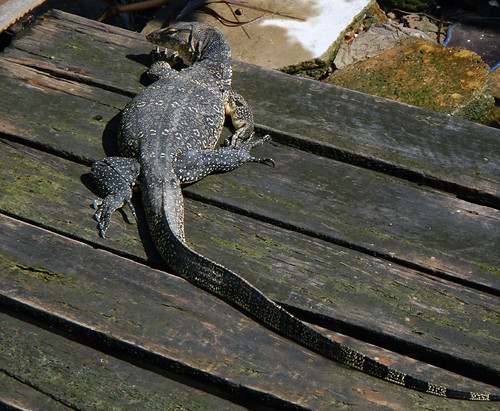 In Malaysia I saw one of these big guys heading in a determined fashion down to the ocean.

“Where is he going? Don’t tell me they swim!”

Yes they do. Now that’s creepy! To think I might have come up against one of these characters while swimming. No wonder that inviting swimming spot was so deserted!